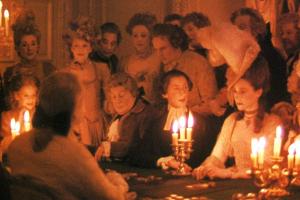 'The process is both analytical and emotional. You're trying to balance calculating analysis against feeling. And it's almost never a question [like] "What does this scene mean?" It's "Is this truthful, or does something about it feel false?" It's "Is this scene interesting? Will it make me feel the way I felt when I first fell in love with the material?" It's an intuitive process, the way I imagine writing music is intuitive. It's not a matter of structuring an argument.' ~ Stanley Kubrick

Kubrick's follow up to A Clockwork Orange, which caused him no end of distractions and controversy, finds him making what seems like a 'safe' choice and the polar opposite of that futuristic gang tale, a 3 hour costume drama set in the late 1700s. Having spent several years researching a film on Napoleon, funding collapsed (because of the flop of Waterloo with Rod Steiger) and he then rejected yet another remake of William Makepeace Thackeray's Vanity Fair and in the process uncovered the authors little known second novel The Luck of Barry Lyndon, first published in serial form in 1844. Producers forced two 'movie stars' on Kubrick as a requirement for the money and after Robert Redford expressed interest but passed, he settled on Ryan O'Neal, then the second ranked box office star, and Marisa Berenson, who had made her name in modelling. As with most Kubrick enterprises they are less actor dependant than other directors and from these unlikely elements he fashioned his epic.

The story starts in Ireland, then occupied by the English and with a duel, where we see Barry's father killed. Redmond Barry, himself Irish and therefore not of the ruling aristocracy and an outsider in his own land, is good looking, headstrong and not too bright, and given he will have to live on his wits the auguries are none too good. Smitten with his cousin and upon learning of her arranged impending marriage for money he challenges her prospective husband, superbly played by Leonard Rossiter, to a duel. Forced to flee his home, fate casts him into the army, where he fails to distinguish himself in the Seven Years War in Europe, but manages to save a minor officers life (Hardy Kruger) who then takes him under his wing. Falling in with a notorious gambler Barry trawls through the great houses of Europe scamming and cheating and looking for the main chance, who arrives in the form of the ravishing Lady Lyndon. The attraction is mutual and he becomes her lover, much to the irritation of Sir Charles Lyndon (Frank Middlemass) who has one of the great death scenes in cinema. The marriage is made and Redmond becomes Barry Lyndon, moving in as Lord of her English manor in all but title. Barry starts to indulge recklessly, ruining the marriage in the process and making a mortal enemy of Lady Lyndon's son, Lord Bullingdon (Leon Vitali). The birth of his son Brian pulls Barry back from the brink and the marriage attains a kind of equilibrium for a time until an unexpected tragedy sends Barry spiralling downwards once more, to the inevitable duel finale.

Kubrick employed all of his notorious, meticulous working methods to construct a thing of remarkable beauty. He duped Warners into giving him rare old cameras that he then had modified into taking a special lens developed for NASA to make a camera that could shoot slow enough to register a scene with only candles for lighting. He sourced the candles made of beeswax that only the Catholic church were having specially made. Costumes and natural light were utilised to make the scenes resemble paintings from the era, over which Kubrick's cameras would then linger lovingly. The length of the shots and languid pacing gave an air of elegance and extravagance, the gilt edged canvas on which to paint his morality fable. Technical virtuosity aside it would be a mistake to consider the film merely a vehicle for showing off, as it is always used in service of the story and atmosphere. If his intention was to 'out english' the english, given the scandal A Clockwork Orange wrought and the perception of him as an American-hellion interloper, it worked. The pace is stately and the brilliant soundtrack of classical and Irish music, fierce counterpoint to the rogueries contained within the tale, which is essentially a rumination on superficiality.

Indeed, in Barry, Kubrick had found someone deeply superficial. The novel itself was much commented on as being 'without a hero', and Lyndon is a mass of contradictions. He is a very feminine character in some ways, relying on good looks and charm to navigate his way through the labyrinthine personal politics of the 18th century courtesan, yet he'll fight a knock down brawl with a huge soldier in his regiment. A coward when looking inwards for fear of discovering his empty shell of a heart, he'll fight a duel for honour or spite and manfully stand his ground, or carry his captain from a burning building. His demeanour seems to forever bark 'what else can I do'? A man not only without answers, but without questions. Barry is eternally unsatisfied, he's living the poor boy 'dream', a gorgeous wife and a country estate, but wants more, to be accepted into English nobility as a peer, an unrealistic ambition at best. All he possesses and all he attains is as empty as the lifeless halls of the mansions we see, like them Barry is a beautiful facade.

O'Neal's performance was problematic for many critics at the time, but from this distance it looks measured and true, and Kubrick was a big supporter of O'Neal's work on the film. There are some remarkably touching scenes involving Barry and Brian, which is fine acting, and the air of bewilderment that's needed for a lot of screen time is effectively rendered. Berenson is working much the same furrow. Kubrick seems to be saying that to get ahead in that environment one need only be pretty and amenable and have no scruples. After 250 years one wonders if much has changed? In the 21st century we may as well be ruled by a celebritocracy.

Whatever the reasons Kubrick opted for a period melodrama, it would have to be the most under-appreciated and misunderstood film in his oeuvre. One of the most visually stunning pieces of cinema ever made and with a script written by Kubrick himself, it may be more of a personal valentine to his adopted country than most realised. One of its great joys is the standard of writing, both the dialogue but more particularly the magnificent words in Michael Hordens wonderful voiceover. Sheer narrative poetry with breathtaking visuals to match, and a musical score to cherish. The work of a master. 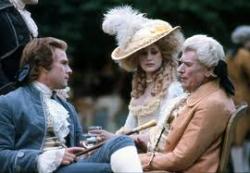 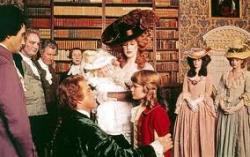 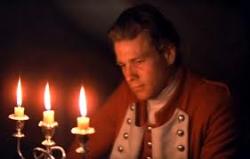