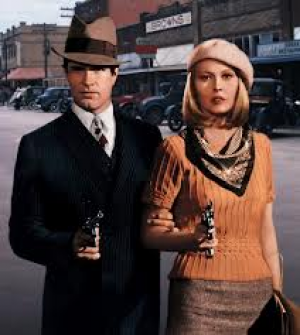 This movie, more than any, probably kick started the great American renaissance of film post the French new wave, led by a bevy of film school upstarts. Scorcese, Bogdanovich, Coppola, Ashby all come to mind, with the older Altman riding in on their coat-tails. It’s fitting that the two young writers Robert Benton and David Newman first took the project to Godard then to Truffaut, who was busy with Farenheit 451, but soon recommended it to Warren Beatty who was looking for a production vehicle for his new company. Beatty baulked at playing Clyde himself, even considering Bob Dylan for the part, before he agreed with Arthur Penn, who directed him in Mickey One, that he was the obvious choice. The casting is brilliant across the entire movie, with Michael J Pollard and Gene Hackman standouts, but the film belongs to Faye Dunaway who is simply luminous as Bonnie.

The outlaw myth in the US is a powerful one, and resonates with a nation that considers itself the champion of the individual. Clyde is fresh out of prison and still looking for an easy ride, in this case stealing Bonnie’s mama's car. The moment he sees Bonnie at the window is the moment he decides to dedicate his life to giving her everything. It’s romantic, foolish and unrealistic and matched by her decision to throw in with him and test their luck. Like a lot of people in the Great Depression, Bonnie has big dreams but no means, and longs to escape small town USA, with Clyde she sees her main chance. Like most braggarts Clyde is more mouth than action, probably figuring he won’t be called upon to prove his bravado, but then he hadn’t figured on Bonnie’s steely determination. She gives him a cause for action and the backbone to carry it through. Small crimes lead to bigger ones, and they soon seem to be playing the leads in the (gangster) movie of their own lives.

Soon Bonnie and Clyde are mildly notorious, and attract a gang in the form of a driver (Pollard) and Clyde’s brother Buck (Hackman). Buck’s wife Blanche (Estelle Parsons) completes the crew and tensions build due to personality clashes between Bonnie and Blanche. The counterpoint to all this is the sexual relationship between Bonnie and the impotent Clyde. After their first robbery Bonnie is exited and ready to consumate their pact, to complete their union, Clyde is unable to perform and is embarrassed by the incident. The power shift after this scene is palpable. Bonnie decides to continue, accepting Clyde for who he is, freeing him to be himself. The two grow closer, even as events become more threatening, both of them depending on the other to fill the empty spaces. Clyde offers Bonnie the illusion of control, and she gives him a kind of patina of righteousness for his exploits. Society has constructed a cage for them, they trade it for one of their own making, as Bonnie discovers when she tries to go back home.

A series of superb vignettes demonstrate why society prefers it’s outsiders to remain outside. A sheriff spits in Bonnie’s face as she kisses him for a posed photo. Bonnie and Clyde are reduced to circus freaks when they pull up for water after being shot up in their car. Gene Wilder’s brilliant turn as a comical mortician ends abruptly when Bonnie has a premoniton of impending death. Mama Parker is finally the one to give it voice when she says goodbye to Bonnie for the last time, telling her that if she stays she brings death to those she loves. Bonnie knows the ultimate price that must be paid.

Arthur Penn offers a romanticised and improbable golden couple as the leads, as shiny as a pair of Broadway stars. The look and framing of Dunaway in particular is a long way from the plain truth of the real gangster. This is an updated Hollywood take on the mythic outlaw, and the escape they represented to ‘ordinary’ people. Early on they allow a couple forced from their home by greedy banks to take shots at the sign marking the property, it’s a non too subtle signal that the real bad guys are not the ones with guns. The reality and explicit violence afforded by the sixties cultural revolution was confronting at the time. Previously a comedy was a comedy and a drama was a drama, but here some slapstick moments can happen alongside moments of real brutality. It makes for an uneasy ride, leaving no room for complacency. To the counter culture warriors, out to stick it to the man, with war raging and riots commonplace, these anti-heroes had great appeal. It’s a tribute to the filmmakers that they didn’t lapse into sentimentality and have them come out as winners. In a celebrated ballet of bullets, Bonnie and Clyde dance to the tune of the establishment finally, grotesque marionettes united eternally, myths in aspic. A brace of period ‘lovers on the run’ films followed, Altman, Scorcese, Speilberg and Malick all giving their take on it. Bonnie and Clyde was much imitated, but never bettered. A classic. 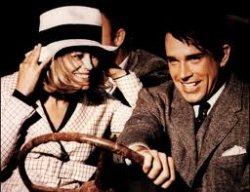 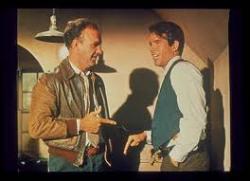 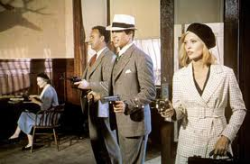 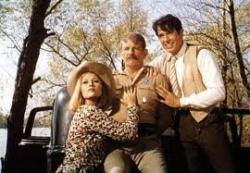 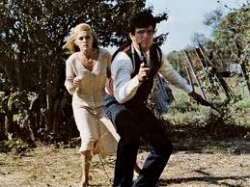