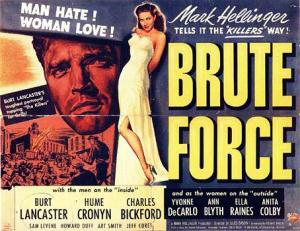 Brute Force is a hard boiled prison noir that still packs a punch, thanks primarily to Jules Dassin's skilled and taut direction and a moody and compelling central performance from star Burt Lancaster. It's genesis can be traced back to producer Mark Hellinger, a famous Broadway columnist in the '30's being brought out to Hollywood by Jack Warner, and being involved with the success of The Roaring Twenties and High Sierra while there. After the war Hellinger signed a deal with Universal and had immediate results with The Killer's unearthing Lancaster in the process, and Brute Force became their next project. Richard Brooks wrote the screenplay, and would himself become a director of some note, and ace cinematographer Billy Daniels (Garbo's favourite) was coaxed out of semi-retirement to shoot it, in a very non-MGM style.

Westgate prison is a chronically overcrowded place, bursting at the seams with all types of inmates, prisoners and civilians alike. In the pouring rain we see the austere surrounds as a hearse is observed taking one more victim of the 'drainpipe' out for the last time. Joe Collins (Lancaster) is being escorted from a stint in solitary by despised head guard Captain Munsey (Hume Cronyn) and Dassin hints at Joe's fate by having him follow the journey of the hearse out of the gates. The ineffectual Warden summons the Doctor (Art Smith) to discuss prison discipline in light of a new directive from head office, the Doc becomes our liberal voice of reason in the face of increasingly draconian methods of punishment. An argument breaks out regarding the effect of overcrowding, 'you're creating a human bomb' the Doc warns, 'you don't cure the sick by making them sicker' sees him argue that all this system does is to create better criminals to return to society. Munsey is ambitious for his own career and sees that the Warden's job is under threat if there is more trouble and he sides with the Government directive to become more authoritarian.

The inmates take care of a stool pidgeon, one of the informers who Munsey cultivates to keep abreast of cliques and schemes. Gallagher (Charles Bickford) is the voice of reason for the inmates, he's been promised a favourable parole hearing by the Warden and helps smooth out any issues between the prison and it's incarcerated guests. Joe wants Gallagher to help organise a breakout, as he can't take anymore, but initially Gallagher wants no part of it. Munsey tries to cultivate Tom (Whit Bissell), one of Joe's cellmates into being his next stool pigeon, but Tom refuses only to have Munsey fabricate a story that Tom's beloved wife had decided to divorce him. Tom's paranoia gets the better of him and the cellmates return from a feature film show to find him hanged. Joe manages to get all of his R17 cellmates selected for dangerous work in the 'drainpipe', which is outside the compound, knowing that he can arrange a two pronged assault on the yard tower if he gets support from Gallagher inside the yard. Relations deteriorate and the Warden suspends all privileges, including parole hearings, which tips Gallagher to joining in the revolt.

Munsey has been tipped off regarding the escape plan, and posts a machine gun outside the wall. The sympathetic Doctor, after having witnessed Munsey's brutal beating of an inmate, let's Joe know he's been betrayed. Joe smokes out the stool pigeon and ties him to the front of a rail bin so that he's the first to face the guards machine gun. Munsey is announced as the new Warden, which is enough to spark a riot and the breakout goes ahead, the yard erupts and Munsey mans the machine gun until Joe faces off with him on the tower. The Doc later asks 'why do they do it '? 'nobody escapes' he adds. The riot is subdued with tear gas, order is restored and the camera pans past the empty cell of R17.

Dassin uses a lovely device of having a poster in cell R17 trigger flashbacks involving the girls that each inmate pines for in one way or another. The inmates are humanised as each episode shows what they have lost by being incarcerated, and Joe's is particularly revealing. His wife Ruth (Ann Blyth) is sick, wheelchair bound and the motivation for him to get out, she represents something pure and real and as he said 'there are all kinds of sick people, maybe we can help each other' acknowledging the darkness inside him and a desire to overcome it. The darkness inside Munsey is counterpoint to this and the sadistic pleasure he takes in tormenting and manipulating the inmates is almost sexual, indeed Dassin shows him stripped to the waist and fondling a rifle as if to underline it. 'You're the psychopath here' the Doc opines at him when his disgust reaches a pitch.

Lancaster is magnificent as the conflicted Joe, and continued his stellar surge to major stardom with this portrayal of a caged animal in need of the one thing that will give his suffering meaning, his lover, and even though he knows the fates are lined up against him you feel he'd rather die standing than live on his knees. Dassin handles the large cast with aplomb, his extensive theatre background a plus, and the atmosphere he creates is always convincing, whether in the claustrophobic cell scene's or out in the yard, with the remarkable set that serves as the centre of the film. He visually determines a world of architectural order at the outset, and a pretentious threat in the force of nature that Joe represents in the teeming rain. The chaos passes and order is restores as Dassin's camera once more passes the mathematical order of the cell doors, nature defeated for the time being. The strength of the piece is that it doesn't offer easy or pat answers, there are guards who are disgusted at Munsey and there are prisoners who are essentially decent men caught in an unyielding system. The machine demands it's fuel, and these men are part of an institutionalised processing conveyor that produces more problems than it solves. America still has the biggest percentage of prisoners in the western world per head of population.

Dassin only made a couple more films in America before being blacklisted, tipped off by Darryl F. Zanuck and sent to London to shoot the remarkable noir Night and the City. 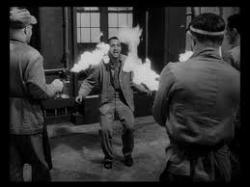 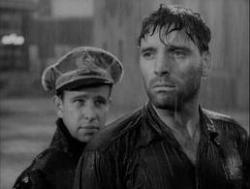 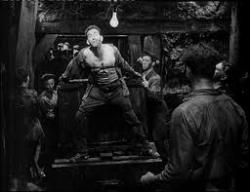 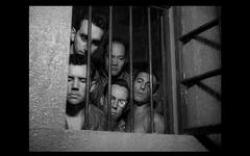