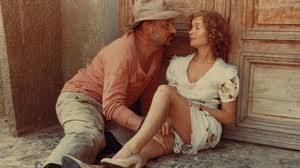 Bertrand Tavernier adapted Jim Thompson’s pulp classic Pop. 1280, about a corrupt Texas sheriff in 1910 and reset the parameters to Senegal, West Africa in 1938. The left leaning French director, who’d worked with Melville et. al. while learning his trade, co-wrote the screenplay with French cinema legend Jean Aurenche, a man mostly thought of as part of the successful team he formed with Pierre Bost. That pair were responsible for writing many classic French films, like Clément’s immortal Jeux Interdits,  and Delannoy’s La Symphonie Pastorale,  Aurenche even contributed to Carné’s masterful Hôtel du Nord   in the late ‘30’s, and it was Aurenche’s own story that Tavernier told in his wartime drama Laissez-passer  in 2002.

Lucien Cordier (Philippe Noiret) is the ineffectual local policeman in Bourkassa, a dirt poor African township, on the eve of WWII, trying to avoid working, or indeed any aspect of the duties of his office, at all costs. Cordier is resigned to living with Huguette (Stéphane Audran) a wife who cheats on him, and he soothes that pain by cheating on her with Rose (Isabelle Huppert). Events conspire to upset the normal avoidance of his duties when a new schoolteacher arrives in town to whom he is attracted. She embodies a quiet dignity that shames him into taking action in unexpected and drastic ways, paying back several people for the myriad humiliations he’s endured at their hands.

Tavernier bookends proceedings visually, employing the stark desert setting playing host to a troubled Cordier, who is busy watching several young boys attempting to extract nutrition from the unforgiving environment. Vultures swirl and circle the emaciated young boys as Cordier seems to contemplate their fate and his own. Cordier has avoided any self reflection, obviously for fear of not liking what he’ll find in his inner self, but circumstances soon arise that see his outer and inner self collide. Cordier represents the idea of ‘line of least resistance’, fulfilling the aphorism ‘all it takes for evil to flourish is for good men to do nothing’, as Cordier desperately tries not to stick his head up above the parapet. In repressing all capacity to stand up and be counted Cordier submits to multiple insults and slights that are the lot of the local constabulary, caught between the colonisers and the colonised. Cordier bemoans his lot, "I'm tired of doing what everyone else wants doing, that they won’t do themselves”.

Cordier’s position is further compromised by his belonging to the outsider clique of the invader. The dividing lines between the indigenous natives and the occupying white French are stark and reminders of it are everyday occurrences, “niggers, thrown in like dead dogs”, is the comment as corpses float down the local river. The human worth of the natives is not a consideration for the conquering French, as Cordier’s claim regarding the population of his town, “1275 souls”, is challenged by his superior officer, “That number includes niggers, but they don’t got souls”!  The colonisers are free to beat the natives without fear of reprisals from the law, and eventually Cordier admits the inequity, “I’m not allowed to crack down on the rich, so I crack down on the poor twice as hard”.

Cordier’s cynical exchange with Anne upon her arrival is a short and telling one, she tells him she’s the new schoolteacher and he says, “It’s good you teach the children to read… so that they can read their father’s names on the war monuments”.  Cordier is a man in denial, and Anne’s arrival and embodiment of simple goodness shakes him from his denial. The two pimps in town who pay him off regularly, and humiliate him in the process, casually take pot shots at the floating black corpses in the river for fun, are the first target of Cordier’s change of heart. Cordier gets further into the dark trajectory his vengeful action necessitates and soon descends into a nether world of confused moral relativism. “Good and evil, nobody knows where the line is… either way it’s of little use here”  he says. Even the township priest, when asked for advice, suggests sophistry in dealing with the fallout from the killings, further complicating Cordier’s rationalisations.

Cordier’s story is the tragedy of the ‘outsider’, a product of colonial separation of conqueror and conquered, therefore no matter how closely he identifies with the natives, or how much empathy he has with them, he cannot be one of them. The white French invaders are fated to be an isolated clique, an exclusive club dissolving in its delusion of superiority. Cordier is conflicted by the empathy he feels for the oppressed and the need to belong to his own class in order to protect his privileged position. “I try to save the innocent, but there aren’t any”,  says Cordier, revealing the depths of his despair, and it is cultural conditioning that has contributed to his bleak world view. A black man falls foul of the new Cordier, “You’re different from otherwhite men”,  he protests, but Cordier’s actions belie the statement.

Taverier grew to maturity during the political upheavals of the General Strike in France, and of the student riots of May 1968. As opposed to Jean-Luc Godard’s alignment with the hardline Groupe Dziga Vertov, a group of Marxist filmmakers, Tavernier adopted a Trotskyite philosophy and joined Organisation Communiste Internationaliste.  Tavernier did not infuse his work with a political slant during the first decade of his directing, and in many ways Coup de Torchon  is the first with a serious political subtext. French colonialism was a hot topic for the left during the ‘60’s and in the light of the Algerian War and the debacle of the French exit from Indo-China it became a rich source of comment in cinema. Tavernier was a first hand witness to the divide between the left, Trotskyites, Stalinists and Maoists, a source of conflict against the wider background of their opposition to subsequent American military intervention in Vietnam. These labyrinthine strands infuse French political subtext in all post 1960 cinema, and form the oblique substrata of Coup de Torchon.

Philippe Noiret enjoyed a fruitful partnership with Tavernier, starring in Tavernier’s first feature in 1974, Let Joy Reign Supreme,  and would ultimately work in 8 of the directors films, one of the most significant partnerships in all of French film. Noiret turns in a remarkable characterisation as Cordier, absolutely owning the role and investing it with pathos and authenticity, never veering into sentiment. The role needed a light touch, as the character moves from a bumbling buffoon to something infinitely darker.  Isabelle Huppert had also worked with Tavernier and Noiret before in The Judge and theAssassin,  some 5 years before, and she turns in one of the finest performances of her career as the superficial Rose. Claude Chabrol’s ex wife, Stéphane Audran, is very good as the scheming and indulged Huguette, who conspires with her ‘brother’ to make Cordier’s life a special kind of hell.

Coup de Torchon  is one of the miracles of French film, touching on issues and areas of behaviour that many Anglo films don’t come close to, both a brilliant character study and essay of the perils of colonialism. Bertrand Tavernier is a master of post Nouvelle Vague  film, and is one of the most significant directors in the latter part of the 20th century. A rich and rewarding viewing experience. 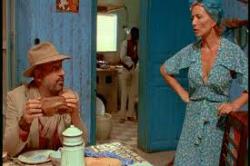 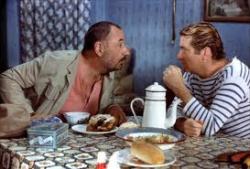 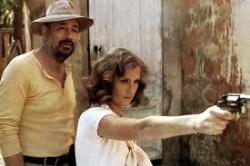