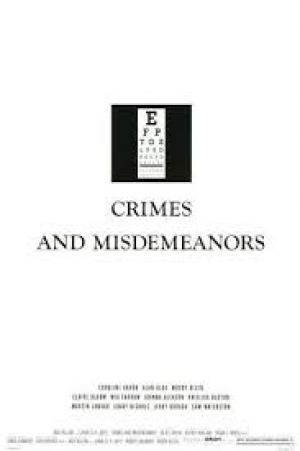 “Moral choices… We define ourselves by the choices we make… we are the sum total of those choices… it is only we, with our capacity to love that gives meaning to the indifferent universe” – Woody Allen

The above is part of the final voiceover by the character of the philosophy Professor (Martin S. Bergmann) and is possibly the most succinct distillation of the existentialist manifesto ever voiced in American film. Notwithstanding the blissful coincidence of the actor’s name, or that Sven Nykvist was the cinematographer of the film, Woody’s debt to Ingmar Bergman is apparent in the search to examine moral relativism in a post modern world. Woody attempted to frame an existentialist argument to a Dostoyevsky like scenario, where the moral question is asked, “Can a man carry around the burden of having committed a murder that goes unpunished”?

Judah Rosenthal (Martin Landau) is a successful ophthalmologist, a loving wife and family underscore his lofty position in society, but an affair with a patient (Angelica Huston) threatens to ruin everything as she becomes increasingly demanding. Parallel to Judah’s story we follow Cliff (Woody Allen), a low level documentary filmmaker living in the shadow of his much more successful brother in law Lester (Alan Alda). Lester gets Cliff a job profiling him on his next commercial project, and Cliff reluctantly takes it, hoping to use the money for finishing his pet project on Professor Levy. Judah goes to his brother Jack (Jerry Orbach) to seek advice regarding the problem with his mistress, and is appalled by the suggestion he has her “taken care of”. Cliff and Lester are both attracted to Halley (Mia Farrow), an attractive co-worker on the film project, Lester is a womaniser and Cliff is in a loveless marriage to Lester’s sister. Rabbi Ben (Sam Waterston) is Lester’s brother who is going blind, and is a patient of Judah’s. The stories intersect at the wedding of Ben’s daughter.

Woody uses the idea of a “God who sees all”,  and extrapolates that cleverly into the metaphors he presents, with Judah being an ophthalmologist, a doctor who specialises in eyes, and the ‘blindness’ of society, as symbolised by the Rabbi. Woody pursues the trademark dissecting of his own neuroses with his usual clinical precision, setting their examination in a universe of moral equivalence. Cliff is the Woody ‘cipher’ in this film, the character that most reflects Woody’s own idiosyncratic view of the world, and he disarmingly uses the character of Cliff’s 13 year old niece as the sounding board to his moral quandaries. Allen adds a dash of cynicism towards commercially successful pop culture with the character of Lester, a man shown to be vain and superficial, or ideal for the times. Woody sets up a showdown between his earnest documentary maker and the shallow TV producer as they both compete for the affection of Halley, who shares many aesthetic tastes with Cliff, and few with Lester.

Lester is the centre of Allen’s moral imbroglio, trying to do the right thing in the eyes of society, but struggling against his flaws and earthly desires. Allen essays the perennial battle between the flesh and the mind, between the transcendent and the immanent, and the Jewish resonance places it in almost biblical context, as the fall of Judah harks back to the ‘fall’ of Adam. Judah is tempted by the devil in Jack, offered a way out, at the expense of his demanding girlfriend, and Judah initially recoils in disgust at the idea, as per his cultural conditioning. More than that Judah realises what Jack proposes violates the universal ‘golden rule’, but the logic of the solution proposed, and the potential benefits to Judah eventually overwhelms any reticence.

Allen frames his story as an examination of the banality of evil, a concept that sneaks past our sensibilities in a media age that favours exploitation and exaggeration. Allen knows it’s the ‘grande’  evil, rather than the individual that grabs the headlines, the ‘Hitler/holocaust’ comparison, and it’s the one he also uses in a spirited Passover debate to counterpoint the everyday evil of his ‘small’ murder. The earthy Jack is more than able to get his hands dirty, living in a ‘real’ world that requires brutal decisiveness, light years from the cosseted luxury that Judah enjoys. Judah has always looked down on Jack and his lifestyle, two brothers who took vastly different paths, one ivory towered and cerebral, the other a life on the streets.

Woody Allen ranks with Robert Altman as the master of handling the ensemble cast in American cinema, and several of his films are at the pinnacle of the type. Martin Landau leads a wonderfully varied and rich collective of acting talent, and manages to make Judah a sympathetic character, no mean feat given his appalling behaviour, and the fulcrum upon which the murky morality fable turns. Alan Alda provides a deliciously sleazy turn as the narcissistic producer and Woody plays it again, as only he can. Nykvst provides the unfussy visuals, capturing New York in autumnal tones that hang a muted layer of melancholy over the entire film.

Allen created a rare thing in Crimes and Misdemeanors,  a subtly subversive film that even a generation before would have been impossible to make. The idea that someone can remain unpunished for a heinous crime was not a shocking one by 1989, but the idea that someone could rationalise it so as to continue to function as a normal and productive member of the upper class definitely was. Woody also creates a comment on the unspoken truth of American society, that it is as class based as any other, an uncomfortable fact that is not widely addressed in American cultural life. The protagonists are middle class and ‘aspirational’, all keen to take as great a slice of the American Dream as they can stuff onto their plate, it’s this driver that informs Judah’s murderous actions and one that backs up his ability to live with the consequences.

Crimes and Misdemeanors  is top notch Woody, made during a period when he had truly found his mature voice. Woody would ride that creative wave for several more years producing fine and idiosyncratic fare like Shadows and Fog,  Mighty Aphrodite  and Bullets Over Broadway,  before eventually faltering in the wake of the media scandal involving his ‘step’ daughter, and his break up with Mia Farrow. Woody’s late career return to form would be associated with a similarly ‘Dostoyevsky’ themed film to Crimes and Misdemeanours,  the stylish Match Point., but it's his original excursion into the morally ambiguous terrain that remains essential Woody. 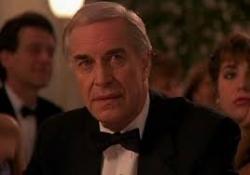 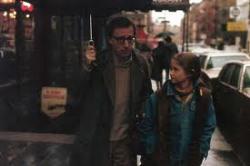 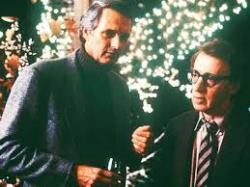