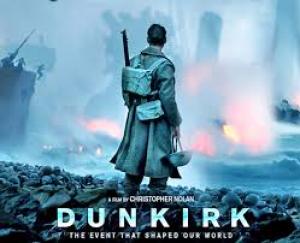 Tommy - A day in the life

"The empathy for the characters has nothing to do with their story. I did not want to go through the dialogue, tell the story of my characters... The problem is not who they are, who they pretend to be or where they come from. The only question I was interested in was: Will they get out of it?" ~ Christopher Nolan

Christopher Nolan had the idea to do a feature on a WWII British Army evacuation from a French beach in the 1990’s but waited until he felt sufficiently at home with large scale production techniques. After making the future/fantasy blockbusters, Inception, The Dark Knight Rises and Interstellar between 2010 and 2014, Nolan set his sights on the past and returned to the project inspired by his retracing the Dunkirk boats journey himself in 1998. Nolan wrote the screenplay himself, strenuously avoiding any dense narrative, political context, or even extensive dialogue and created a film for the ages, an impressive visual feast, an impressionistic, existentialist masterpiece.

Tommy (Fionn Whitehead) runs through the streets of the French town of Dunkirk, dodging German bullets as the British Army are chased to the sea in the early days of the war. On the beach he joins 300,000 men who are unsure of their fate, waiting and hoping for evacuation which seems remote and uncertain. Tommy finds a friend, Gibson (Aneurin Barnard) and together they attempt to exit via a hospital ship. After that fails they manage to scramble aboard a destroyer, but that is sunk by a U-boat torpedo and they find themselves back where they started, lucky to be alive. Mr Dawson (Mark Rylance) pilots Moonstone, his own small craft, across the English Channel to aid in the mass evacuation, accompanied by his son Peter and young George, a family friend. The Air Force offers limited support in the form of Spitfire cover, and two pilots, Farrier (Tom Hardy) and Collins (Jack Lowden) attempt to hold off repeated German attacks.

Nolan’s approach to the subject echoes that of Terrence Malick in The Thin Red Line, where it’s primarily a ‘situationist’ film i.e. the viewer is in the middle of the action and without outside perspective or context we suffer with the characters. Nolan uses this existentialist terror to underpin the relentless forward motion of the central characters, swept along by a mostly unseen threat. It is a war film without much war, certainly the enemy is shapeless, both physically and politically, the fight is not against Nazis in a direct sense but against death itself as it arrives regularly in an arbitrary and unpredictable way. Dunkirk is a true horror film in every sense of the word, in a way blood and splatter, pulp films could never hope to be.

The calamity of Dunkirk was quick arriving, on the tail end of the ‘phoney war’ period, once the Nazi war machine got rolling some 3 million Germans rolled across the border and France capitulated 6 weeks later. By June 1940 the French were effectively routed, and late May saw the Brits with their backs to the wall, with no help in sight and a British public largely unaware of the gravity of the situation. America was forbidden to assist by the Neutrality Act of 1939, which effectively tied President Roosevelt’s hands in offering aid to Churchill and Great Britain. America in 1940 was not much more than a profiteer from selling arms as it had a ‘cash and carry’ policy, where Britain, France and Italy were buying munitions as long as they paid cash and organized collection! It was even a violation of the Act for British ex-pats in Hollywood to meet and encourage American support, and even Alfred Hitchcock was to be investigated by Congress because of his production of Foreign  Correspondent, a film encouraging America’s entry into the war. By the time he was due to appear the Japanese bombed Pearl Harbor and the question was rendered moot.

The film eschews movie stars or CGI trickery, relying instead on the compelling nature of the predicament itself to provide the tension and the momentum. Tom Hardy, a most expressive actor and bona-fide star is seen mostly in a pilot’s face mask, which makes his final reveal more emotional, and Kenneth Branagh wanders a pier and presents a British stoicism that is anti-histrionic, hardly Award season material. The young foot soldier actors are very effective, but they are cogs helping to fill in Nolan’s blanks in creating a seamless cinematic reality that comes across as authentic and powerful. Nolan name-checked French minimalist director Robert Bresson as an influence on Dunkirk, and the anti-emoting of the cast is indeed Bressonian. Bresson would famously insist his ‘models’, (he mostly used amateurs instead of professional actors) keep neutral expressions and flat delivery to avoid ‘acting’. Nolan’s ensemble doesn’t need to elevate the drama, they are playing men in survivalist mode, not knowing if they’ll survive the day.

Of course, this film would not have been made had Nolan not been a bankable director who could name his own project after his huge box-office winning streak. The fact that Americans are absent from the narrative in 1940, still some 2 years away from effectively joining the fight, would have made Hollywood money hard to come by, and the event was a defeat in military terms, so hardly Hollywood fodder. Nolan also pulled off the remarkable feat of making a film that is more humanist than nationalist, where ordinary people helped create something extraordinary, coming to the aid of their boys. The relief of the people in the finale and the stirring words of Churchill’s “We shall fight them on the beaches” speech, does not feel triumphalist or overtly ‘patriotic’, and where a lesser director may have overplayed the moment, Nolan favours understatement, particularly with the Mr Dawson character, beautifully embodied by Mark Rylance.

Nolan handles the epic scale of the event as surely as he translates the intimate moments. There are many subtle, nuanced touches that add depth to the picture, like Tommy joining the ranks of the ‘wrong’ unit in attempting to evacuate, “Grenadiers mate”, is the class-based barb aimed at moving him on to his own ‘kind’. In typical English fashion a kind of sub-class system existed in the ranks, and the English ability to queue comes in to its own on the beach. The British population were not broadly informed as to the peril of the situation, but once nearly 800 civilian vessels joined the armada and crossed the water, they were fully engaged. Churchill hoped for 30,000 men to be evacuated, in the end ten times that many made it off, including 120,000 Frenchmen. The British lost 6 destroyers in the process, and hundreds of other craft, but dug in across the channel to delay Hitler’s progress until finally the New World came belatedly to the fight to save the Old.

Nolan made an inspired choice in dividing the film into three distinct time frames, intercutting between each, involving Land (over the course of a week), Sea (over the course of a day) and Air (over the course of an hour). The effect is like a filmic version of the famous orchestral, cacophonous section of The Beatles’ masterpiece A Day In  The Life, 24 bars of ascending notes that start as a low, dissonant rumble and eventually climax in a stunning single note crescendo. Nolan starts with the mass chaos of the beach, so memorably revealed as an epic contrast to the small street scene Tommy exits, introduces other tones at irregular intervals as the action gets more intense with every frame, until the crescendo of Tommy being plucked from the water and on to Moonstone. Nolan keeps all the disparate components in harmony and aided by a stunning score from Hans Zimmer, he orchestrates a filmic, symphonic masterpiece.

In an era when movie heroes are mostly comic book cartoons, Nolan makes a case for the quiet heroics of ordinary people. In an era where nationalistic flag waving is having a moment, Nolan has nary a Union Jack in sight. In an era where too much in never enough, Nolan shows balance is everything, never losing sight of the human moments within the epic framework. Dunkirk has found an audience, but anyone expecting a Hollywood war film will be scratching their heads – Nolan kept his, and made a masterwork in the process. 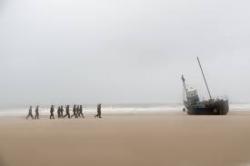 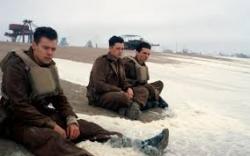