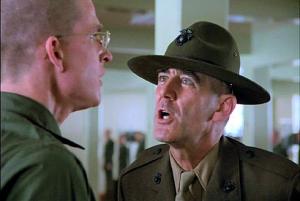 Kubrick had essayed the folly of war twice before, with Paths of Glory and Dr Strangelove each offering a specific but ultimately detached viewpoint, but with Full Metal Jacket  Kubrick takes on the Vietnam war and gives us a grunt's eye view of the action. Gustav Hasford's novel 'The Short Timers', about a group of young recruits who go through a 385 day short term enlistment in 1967, starting with basic training at Parris Island under Drill Instructor Hartman and ending with a tour of duty near Da Nang, Vietnam. Kubrick had ambitions prior to this to do a film on the holocaust and was interested in the Thomas Keneally book Schindler's Ark, and enlisted writer Michael Herr to help him, but the book was optioned by Steven Spielberg and Kubrick decided on the Hasford book instead. Many actors were considered for key roles, including Bruce Willis,  but Mathew Modine was cast in the pivotal role of 'Joker' and after employing Tom Colceri as Hartman, Kubrick changed his mind and used the technical adviser he had instead, Lee Ermy. Modine asked his friend Vincent D'Onofrio to audition as well and he was cast as "Gomer Pyle'.

Kubrick book ends the film with two deeply ironic pieces of music, starting with a corny Country and Western ditty called 'Hello Vietnam', as the recruits have their hippie era hair shorn. The boys are immediately in a 'world of shit' and at the mercy of merciless Drill Instructor Hartman, who proceeds to break them down as humans so he can rebuild them as fighting and killing machines. In what amounts to a half hour of an extended and brutal soliloquy, Hartman informs them 'you will be a weapon', and soon they are reciting the Rifleman's Creed as though it were the Lord's Prayer, and anthropomorphising their guns by giving them female names and sleeping with them. One of Hartman's tools is ritual humiliation and for this he needs to single out a weak link, in this case 'Pyle' who is also ostracised  the group as a result. Joker is given some responsibility in regard to Pyle, and his method of engaging Pyle seems to be bearing fruit but Hartman crushes the intellectually stunted boy-baby at every turn. Joker worries when soon the only thing Pyle talks to is his rifle, and Pyle demonstrates to Hartman with brutal efficiency just how successful his technique of building a killer has been. "It is a hard heart that kills", said Hartman, who goes on to speak with pride of the shooting achievements of ex-marines Lee Harvey Oswald and mass murderer Charles Whitman.

Joker takes an assignment as a journalist with Stars and Stripes once he's 'in country', soon learning that he's as regimented and straight-jacketed there as in any other part of the Corps. A search and destroy mission is described as 'sweep and clear', as the army approaches language in an Orwellian fashion, Kubrick commented that Vietnam was the first war to be run by advertising agencies. As a small protest Joker has taken to wearing a peace emblem on his marine outfit, causing one of the more memorable exchanges in any war film when a Colonel notices it and challenges him on it, teasing out finally a reason for it's presence "I think I was trying to suggest something about the duality of man Sir... you know, the Jungian thing". The flustered Colonel can only bluster about hoping this 'peace craze' blows over as "inside every gook there's an American trying to get out". Kubrick demonstrates how easily the madness of war is glossed over by the rationales of it's proponents. Joker lampoons the war mongers with his John Wayne impersonations, a sly dig at the worst of the Vietnam cheerleading films, the execrable The Green Berets. The Tet offensive catches the Americans off guard and Joker joins his friend in helping clear a part of town held by the Vietcong, they get cut off from support and pinned down by a lone sniper. The unit catch the sniper, a teenage girl, and as the men stand around her while she's dying she begs them to shoot, Joker is chosen to do it, he hesitates, but finally pulls the trigger. The unit marches back to the lines singing the theme from the Mickey Mouse Club.

Kubrick examines the view from the ground, setting his camera in amongst the soldiers as he did in Paths Of Glory, but here they are not pawns in a bigger game so much, we hear from them and about them, lessening the audience detachment. Joker is a voice of reason and humanity in a sea of even if he finally loses something of himself in the 'mercy' killing. Kubrick is interested in seeing what happens to an ordinary group of suburban and rural boys when the military converts them into an 'asset', what is lost and what, if anything, is gained in the process? In military terms conformity is all but, as Joker affirms, humanity cannot fully be suppressed and excised. Women are sidelined, non existant in the almsot homo-erotic world of the barracks or reduced to Asian hookers in Vietnam out to make a buck from the grunts, just another thing for use, like their rifles.

Kubrick uses all the tricks he has in the visuals of the piece, and even though his regular cinematographer John Alcott, was burnt out from Kubrick's demanding methods and refused the assignment, his replacement Doug Milsome, was more than up to the task. The barracks scenes on Parris Island have a clinical symmetry that is a trademark of Kubrick's style, and the chaos of the Vietnam city of Hue suggests a potent and dramatic post apocalyptic landscape, reinforcing the 'I am become death' motif that Animal Mother has, un-ironically as it turns out, written on his helmet. The long tracking shots and fluid camera style is there, and the long takes and intense, unyielding gaze of the lens. Kubrick the eternal observer, calm and dispassionate? In his own way Kubrick is not detached at all, he gets in close to the young men who are subject to this institutionalised conditioning and reflects on the damage and the cost, where's the detachment in that? Joker's journey is that on a sensitive man in a world that practices desensitisation, Kubrick is privy to this and never lets us forget it. After the docu-drama approach of Paths of Glory and the black satirical perspective of Dr Strangelove this was similarly a war movie to speak to it's times. The 1980's were a time of growth and greed in the west, and reminding the world of the human cost of colonialism, of ideologies colliding to create winners and losers, of feeding the capitalist war machine, meant facing the consequences eventually.

Full Metal Jacket came at the tail end of a cycle of Vietnam films starting with The Deer Hunter and Apocalypse Now and more or less ending with Oliver Stone's Platoon and was therefore a little overlooked, even for a Kubrick 'event'. Kubrick's idiosyncratic eye provides one of the sharpest and most acerbic examinations of the results of that war, a scarring event on the national American psyche and a lesson it seems that will never be learned, as Iraq continues to prove. 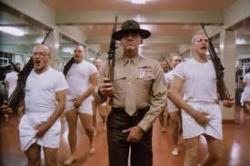 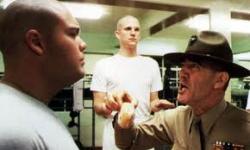 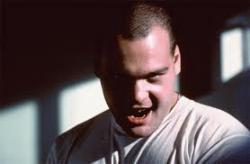 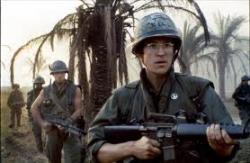 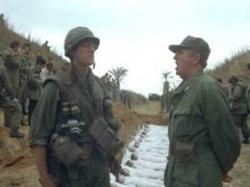