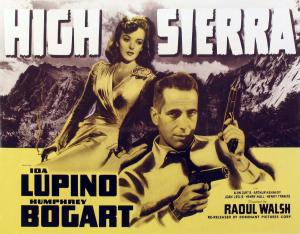 High Sierra more or less marked the end of the continual Warner Gangster cycle that had fed a public fascinated by the antics of Prohibition Era gangs, and media sensations like John Dillinger and ‘Pretty Boy’ Floyd. Producer Mark Hellinger sensed a kind of ‘fin de siècle’ in the W.R Burnett novel, and hired ace Warner lot writer John Huston to work on the property for either Paul Muni, Warner’s biggest star, or George Raft  Huston wrote the final draft with Burnett, and Muni tore up his contract after Warner’s reneged on an agreement to fund his dream project on Beethoven and so ruled himself out. Raft was unhappy playing thugs who always died in the end, instead of ‘hero’ roles and he passed, the way was then clear for Bogart, who actively campaigned for the part, to ascend to his first genuine starring role, and with that Warner’s clicked their publicity department into overdrive to ensure no stone was left unturned. Raoul Walsh was signed on as director, a veteran of silent films and something of an action film legend, he had helmed the Hellinger penned Roaring Twenties and the previous Raft/Lupino/Bogart vehicle, They Drive By Night which was released as High Sierra was being shot. Unusually for 1941 most of the exteriors are shot on location, and they add immeasurably to the films look and feel, making this gangster film much less dated than others from the era.

Roy Earle (Bogart) is an anachronism, released from prison in a deal arranged by Mac, an old colleague, his price is he falls straight back into the only life he knows, pulling a hold up in return for the pardon. As a veteran of the gang wars of the late ’20’s he’s scathing of the ex-cop who gives him instructions and with the young punks they lumber him with for the gang he finds upon arrival in Nevada. The punks have a girl attached, Marie (Ida Lupino) and Roy is insistent she needs to go. Marie pleads her case and Roy relents, seeing something of a kindred spirit in the outsider girl who’s looking to belong to someone or something. Roy has befriended a poor farm family, much like his own, who he accidentally met on his journey west, and falls in love with the grand daughter Velma (Joan Leslie) a sweet and innocent young woman who has a club foot and no prospects. Roy convinces her grandfather Pa (Henry Travers) to let him pay for corrective surgery to fix the foot and he agrees. Roy meets Mac, an old acquaintance who gives him instructions as to what to do in the event of his death, as he’s seriously ill. Roy meets the Doc (Henry Hull) who helps arrange the surgery, only to be told ‘remember what Dillinger said about guys like you, that you were rushing to death’, and that Velma will be repulsed by him when she finds out who he is.

Roy and the gang wait at the mountain resort for their inside man to give the go-ahead for the heist. The young punks prove unreliable, and Marie finds a place as the lookout for the job. Roy proposes to Velma, hoping she’ll come away with him, but she turns him down, he leaves dejected, promising to return and visit Pa. The heist goes ahead and Roy kills a guard, the punks panic in the escape and drive their car off a road edge and it bursts into flame leaving Marie, Roy and the stray dog Pard (Bogart’s own dog) in the other car and in the clear. Roy takes the rocks to Mac, but he’s dead and the ex-cop who was in on the deal tries to kill Roy, who he shoots and wounds, but Roy kills him and manages to find the Doc to get fixed up. Roy and Marie lie low while plan B kicks in and a fence is found for the hot jewels. Roy visits Velma one last time, and finds her old flame there and dancing with her, he finally relaises the foolishness of his infatuation, Marie joining the party to look over her rival as she’s now in love with Roy herself.  Roy forms a deep bond with Marie, and when word comes through the money is ready all seems fine. The inside man squeals, and suddenly Roy’s mug-shot is all over the press, and he’s on the run again. Roy places Pard and Marie on a bus to Vegas, promising to join her, but is sprung in a drug-store job and the police soon box him in, forcing him towards Mount Whitney, the iconic monolithic desert mountain. After a car chase across the hills, Roy has to flee on-foot and holes up in the high country. Marie returns as the siege has become a media event, but refuses to help talk Roy down, knowing he’d rather die than return to prison. Pard gets away at the sound of Roy’s voice and his barking makes Roy realise Marie is below, and he leaves his cover to yell that she had nothing to do with the job, but a sniper has been positioned on the high ground and Roy is gunned down.

High Sierra works so well because here is the gangster as anti-hero, a figure that grew to dominate ‘Film Noir’ over the next 15 years and a figure that spoke to the counter culture generation, ensuring a lasting legacy. Huston and Burnett invest Roy Earle with many human qualities and it’s this extra depth and dimension that separates High Sierra from other crime films of the era. Roy has a heart in spite of himself, taking in a stray dog and a stray woman, all the while yearning for something pure in Velma. When he realises that Velma is a self-centred juvenile, he suddenly realises the ‘pure’ heart he was searching for was there all along in Marie. Roy’s fate is foreshadowed by a character who outlines the disastrous death’s of Pard’s owners when Roy takes a shine to the stray. Marie shows the same determined devotion to Roy, hoping for a life that leads her away from her ‘dime a dance’ petty existence. Roy is an existential hero, a flawed man compelled by his inner code to act out on the deal he made, even when the deal goes bad and he knows it will mean he will die as a consequence. Roy looks at the body of Mac on the bed with the loot next to him ‘layin’ there dead with half a million dollars next to him’, and he realises that true value won’t be found in money. Roy defines his world by strict limits, and ironically his  code of ‘no women’ proves to be his undoing, it’s Marie who changes him in ways he couldn’t know or even articulate. Bogart’s unique ability to convey this conflicted character is at the heart of the film’s success and Bogart’s immortal screen persona was born in the process. ’60’s college audiences grew to lionise Bogart, the epitome of cool, amazing when you consider he’s an average looking guy as compared to someone like a James Dean.

Raoul Walsh directs with a muscular vitality, effortlessly finding the best angles and perfect pacing to ensure the film cracks along and yet still gives us a portrait of a man we can care about, making the otherwise sentimental ending of Pard licking the dead gangster’s hand work beautifully. In the shadow of a natural monolith Roy finally finds peace, he ‘crashes out’, free at last. Rousing entertainment in the great Warner’s tradition, who had by default unearthed a star at last with Bogart, a personality who appears to be timeless in his appeal, and with audiences these days asking ’who is Paul Muni or George Raft"? it seems Bogie has the last laugh.

During filming Bogart struck up a great friendship with the rogue-ish writer and soon to be director, John Huston, which would go on to become one of American cinema’s great teams, producing such classics as The Maltese Falcon, The Treasure of the Sierra Madre, Key Largo and The African Queen.

*The film continued to resonate for future generations and Steve McQueen was such a fan he lifted many elements for his ’70’s crime flick The Getaway, including the look of his character, taking Bogie’s dark crumpled suit look of  ‘Mad Dog’ Earle and making it fresh for a new generation. Easy to do when you’re dealing with archetypes, and a canny choice. 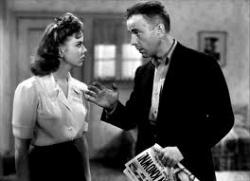 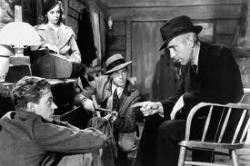 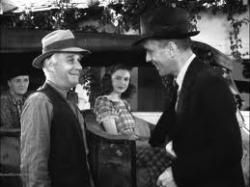 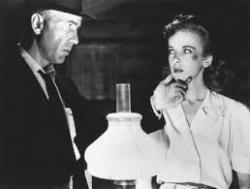 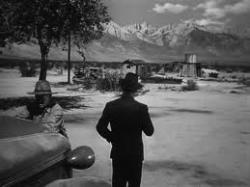 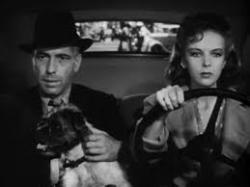 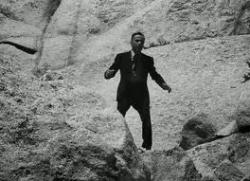