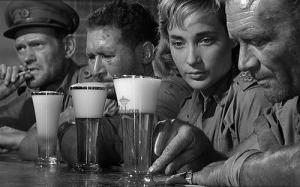 "I am a pacifist. If there was another war, I don't think I would go to it." ~ J. Lee Thompson

The enormity of World War II and the massive human canvas of suffering that it represents is broken down to a small vignette focused on 4 occupants of an ambulance making its way across the Syrian desert as the German army pushes the Allies back from their coastal positions. After all the propaganda style war films of the 40’s, by the late ’50s audiences were ready for a more nuanced approach and Ice Cold In Alex  stands as a great example of a psychological war film, allowing  for a detailed examination of inner turmoil rather than action and gunfire. That it could hold the tension and interest for 2 hours and 9 minutes is testament to its taut script (based on a true story) detailed characterisations and the technical ability of its journeyman English director J Lee Thompson, whose other notable films would include Tiger Bay  and Cape Fear. It contains one of the stand-out roles of a distinguished career for Mills, who perfectly captured the decent Englishman on the verge of a breakdown, maybe one bad incident away from full blown shell-shock.

Captain Anson (John Mills) is a man at the end of his tether, war weary and borderline shell-shocked he is seeking solace in the bottle and taking out his frustrations on all around him. German advances mean he is ordered out of the city in a strategic withdrawl, but must leave behind some of his men, including an officer friend who shares an interest in a girl in Alexandria and who will certainly be captured by the enemy. Feeling he’s betrayed his brother officer, who’s also let him know how unimpressed he is by his drinking problem, Anson packs all the available booze he can find in the staff car and heads off with the column. Circumstances conspire for the car to be commandeered by a superior and Anson watches as it heads off down the road only to be blown to bits by a German shell. Anson falls in with Sergeant Tom Pugh (Harry Andrews) who knows of Ansons problem and is sympathetic, they pick up two nurses Diana (Sylvia Sims) and Denise ( Diane Clare) who have been left behind in the confusion and end up separated from the rest of the column. Deciding to cut across a minefield they set off and at a petrol dump en-route they pick up a South African, Captain Van Der Poel (Anthony Quayle) Ansom initially reluctant but swayed by the Boer officer’s bottles of gin.

The tension ramps up terrifically as they cross the minefield, Thompson employing some great low view shots of the tyres brushing a mine as they inch across the sand. The minefield is strafed by a German plane and the ambulance drives off at speed smack into an enemy patrol. The planes bullets have hit nurse Denise and Poel manages to talk the patrol out of taking them prisoner as they are an ambulance with wounded woman on board. They continue but the nurse succumbs to her wounds and is buried in the desert, a makeshift cross marked with her name in Diana’s indelible lipstick. Anson is still shaky, he’s drinking from the gin supply in Poel’s backpack and Diana starts to look after him, recognising he’s at rock bottom.

Mills is very effective, cast against type in much the same way Jimmy Stewart was in some Anthony Mann westerns, he’s a man on the edge and we’re not sure if he’ll find his way back. A second Nazi patrol finds them but Poel again talks them free. The fact that Tobruk has fallen to the Germans means they will be forced across a dangerous quicksand like depression in order to get to Alexandria, where Anson has told Diana he’ll buy them all the best ice cold beer in the world.

The old ambulance snaps a spring in the middle of nowhere and, in an emergency when fixing it Poel jumps in, proping the vehicle up on his back, saving all their lives. Some doubt has been raised about Poel seeming phony, as he sneaks off with his backpack at regular intervals. They head off into the depression and in trying to catch Poel out both the backpack and Poel get sucked into the mud. They manage to pull him out but are convinced he is a spy, even though he thinks he got away with it. The end of the journey is in sight, Diana and Anson are attracted to each other and for the first time speak personally, Diana kissing him. The last hurdle is a steep sand hill and the old ambulance charges at it like an old war horse, held together by spit and faith. The vehicle gets hopelessly bogged and Anson snaps, Diana talks him round and steadfast Tom saves the day with a scheme to get the old bucket up the hill. Anson finally finds the strength to summon the inner reserve needed to overcome the obstacle, even if it seemed they were doomed to live out a Sisyphus like task, endlessly tackling the hill.

Driving in to Alex Anson makes an appointed time with the British military police to come and pick up Poel at the bar where the beer awaits. Diana asks Anson "what about us?", but he’s not committing, recognising he’s still in no shape to share his life until he’s sorted it out. In a nice moment she reaches for her lipstick to freshen up before they reach the bar. Anson has 4 ice cold beers lined up and as the dew sparkles on the glass they drink to the success of the journey and remember dead comrades. Poel tries to run as the MP’s approach, but is given a German uniform by Anson, told to wear it or he’d be shot as a spy. Poel obliges and as he’s taken out he drinks to their victory over the desert, the greater enemy, and they drink a toast to him. It's a nice way of saying what unites us as humans is more significant than what divides us.

Ice Cold In Alex  is a wonderful construction where the sum of the whole is greater than the sum of its parts. The magic that can be so elusive in combining all the disparate elements needed for a film to work are here in great harmony. It’s an impressive and thoughtful work, made believable by solid ensemble acting and almost documentary like location filming. One of the small stories in the North African campaign, but a compelling and human one of survival against the odds, where worth is proven and respect can be won regardless of which side you’re one. Great stuff. 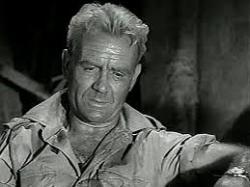 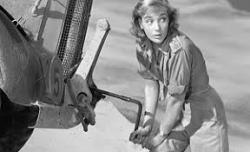 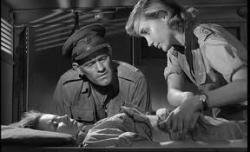 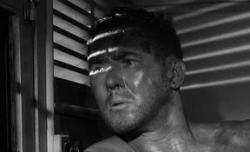 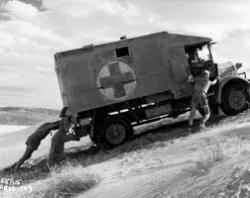 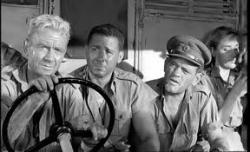