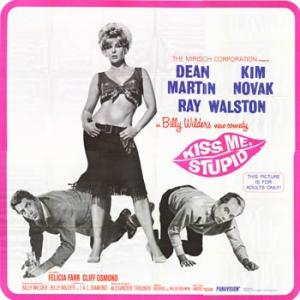 It’s 1964, the year of the Beatles, and Billy Wilder produces a version of an Italian sex farce that features the music of an icon of the generation Rock and Roll usurped in Dean Martin. That in itself may not fully explain it’s failure to connect with an audience, but serving up a morality fable that essentially has a happily married housewife trade places for a night with a prostitute, and for the women to come out as the winners of the piece, that was a bridge too far. Wilder has a terrific time with the complicated scenario, pointing up double standards galore as the husband who was willing to have another man think he was happy to pimp his wife for his own gain. The husband eventually sleeps with the prostitute with the knowledge of the wife, but Wilder frames it so that we are unable to condemn either the actions of the husband or the prostitute, or the actions of the wife who takes a paying customer and makes $500. Wilder had made us all complicit and also disarmed those on the high moral ground and middle America didn’t like it.

Wilder sets the tone by calling his small town America location ‘Climax’, and continues his examination of American sexual mores in the bland post Eisenhower era, the counter culture of the ‘60s yet to take hold in the wake of Kennedy’s assassination. Wilder’s  showbiz star who embodies all that is sleazy and repugnant in the industry is Dino (Dean Martin), almost playing himself as he parodies his drinking image, croons in his inimitable style and even pokes fun at his friends, ‘That Sinatra kid gone missing again’? he asks as a road block diverts him off the main highway. What Frank thought about a gag about his son’s real life kidnapping of just a few months earlier is not known! Dino pulls in for gas in Climax only to find a budding would be songwriter in Barney (Cliff Osmond) keen to make the most of this random piece of fate. Barney’s musical partner is the local piano teacher Orville (Ray Walston) and soon they conspire to keep Dino in town for the night while they pitch their mediocre songs. As Orville is almost insanely jealous when it comes to his pretty wife Zelda (Felicia Farr), the boys realise that Dino will be interested in her and so hit on a plan to replace Zelda with one of the local prostitutes from a nearby saloon, The Belly Button. Zelda is forced away by Orville’s suddenly nasty demeanour and Polly (Kim Novak) gets the $25 job to take her place for the night and to do what it takes to make Dino happy.

Wilder manages to confound our expectations by humanising Polly, and what seemed to be a straightforward commercial transaction is complicated by a growing rapport between Orville and Polly who takes to the role of wife with a degree of relish. Orville scores the songwriting bulls-eye with Dino, who’ll agree to anything at this stage and all is going well, but when he leaves Polly with Dino, knowing what she’ll be doing for his benefit, he snaps and throws Dino out before he can bed Polly. Zelda meanwhile has returned and not been allowed into the house by Barney, and assuming Orville has a good time girl inside she heads to The Belly Button to get drunk. Zelda is soon the worse for wear and the local Madame deposits her in Zelda’s trailer home out the rear to sleep it off. Dino winds up in the Belly Button looking for action but is appalled at the quality of woman on show, until the barman recommends he try Polly in her trailer. Dino goes to the trailer and finds Zelda, who puts two and two together and decides to bed the singer herself while she sings the praises of Orville’s songs. Dino leaves $500 for Zelda, and a smile on her face, as Orville returns Polly to the trailer having spent the entire night as man and wife. Orville is upset with himself ‘the way of all flesh’, he says, but Polly disarms him by not taking the $25 and saying he slept with his wife last night. Zelda and Polly meet in the trailer and exchange stories.

Wilder subverts all sexual norms and standards of behaviour in a similar way to how he did in The Apartment, but crucially here no one loses. Dino gets his piece of arse, Polly gets her means of escape, Orville and Barney get their songwriting break and Zelda gets to sleep with her teenage idol and return to her happy marriage. What may have offended the moralists is this lack of negative consequences for what was promiscuous and libidinous acts in a decidedly conservative culture. Wilder again seems to be calling into notice that everything is a commodity in a consumerist culture, including sex, but he actually has the husband retreat from his ‘pimp’ decision and rejects letting his ‘wife’ sleep with the singer. The prostitute doesn’t take payment for sleeping with her ‘husband’, and Wilder is saying these are deeply moral acts in terms of human transactions, and frames them sympathetically as well as comically. Dino is venal and superficial, but he’s a cipher, consumerism rampant, and as long as he has the means to pay that’s supposed to be ok? Wilder shows again the dark side of the cult of personality.

The frustration with the film is not what it is, it’s pretty good, it’s what it might have been?. Wilder offered the part to Jack Lemmon, and when he was unable to fit it into his schedule Wilder signed on Peter Sellers, who then had a heart attack two weeks into filming and had to be replaced by Ray Walston. Marilyn Monroe was slated to do her third film for Wilder as Polly but tragically died before production started and eventually he role went to Kim Novack. One feels with Lemmon, Monroe and Martin the film may have become a classic, with Sellars it would have at least been an interesting exercise, but with Walston it suffers from his hammy overplaying.  The three way interplay in the scenes where Dino first meets the wife fall too flat and needed a lighter touch than Walston’s broad shtick. The set up prior is well handled, as is the denouement, but this lumpy middle third flaws the film in ways that other Wilder films don’t suffer from. Dino is fine in what was not an acting stretch for him, and both women are very good, Novack as Polly with her broad Jersey girl accent works well and Felicia Farr (Jack Lemmon’s real life wife) is excellent as the good girl Zelda who enjoys an evening on the naughty side. Wilder had an uneven result in holding up mirror’s to the mores of his adopted home, and for every success like The Apartment and The Lost Weekend there were flops like Ace In The Hole and Kiss Me, Stupid where the mirror was just a little too tarnished to stare at for any length of time.