Alan J. Pakula already had a fine career as a writer and producer, in league with his director friend Robert Mulligan, winning the Best Picture Oscar in 1962 for their masterful To Kill A Mockingbird.  The success of their partnership effectively delayed Pakula’s own directing ambitions but he finally started his career some 7 years after with the mildly satisfying, The Sterile Cuckoo,  starring Liza Minnelli. Pakula hit his stride immediately after with Klute,  his second film as director and one of the defining thrillers of the American Renaissance period, an era in which the older Pakula kept pace with his film brat contemporaries like Coppola, Spielberg, Friedkin, Bogdanovich and Scorsese. Pakula hired the ‘power couple’ of the day, Jane Fonda and Donald Sutherland, a pair actively engaged in the counterculture’s push back against Nixon and his unpopular war in South-East Asia.

John Klute (Donald Sutherland) is a taciturn Pennsylvania cop whose best friend Tom goes missing under mysterious circumstances. Klute decides to do some private investigation, supported by his friend Tom’s boss (Charles Cioffi) and the trail leads to a quixotic New York call girl named Bree Daniels (Jane Fonda). Bree’s life has taken a turn for the worse, ever since Tom’s apparent and mysterious intersection with her own some two years earlier, she lives in fear of a stalker and is afraid of the dark. Klute convinces Bree to cooperate in Tom’s disappearance and the two begin to form an unlikely relationship. Klute starts to put together the puzzle of Tom’s disappearance and the trail leads to some seedy parts of the New York sub culture and to some surprising discoveries.

Bree is a mass of fear and contradictions, a fiercely hip and independent woman who is reduced to relying on a ‘square’ for protection. The so-called sexual revolution of the 1960’s and its clarion call to ‘freedom’ from cultural fascism led to a confrontation between the sisterhood and the old school, patriarchal paradigm. Early in the film we confront the idea of the liberated woman when Bree tells a client not to “hurt me any more than I like to be hurt”,  it’s clear we’re not in Kansas anymore. Bree vacillates between work as a call-girl and work as a model and actress, and Pakula blurs the lines between each with a stylish opening section featuring Bree in a modelling cattle call. Pakula plays with the idea that many women are forced to sell a version of themselves in order to succeed in a male dominated world, worse still, to sell a version of a male constructed, fantasy stereotype.

Bree’s intelligence and spirit inevitably leads to problems in her dealings with men, and in separating relationships from ‘tricks’. She tries to work through her issues in sessions with a psychiatrist and reveals that during sex with her clients, “for an hour I’m the best actress in the world.”  It’s clear that the attraction to work as a prostitute appeals to Bree because she feels totally in control and her feelings for Klute soon sees that dimension vanish, causing her to feel confused and vulnerable. Klute forces her to confront real feelings, forces her to see the value of authenticity over fakery, she recoils, wanting “the comfort of being numb again.”  Klute’s natural authenticity and guileless approach reveals the emptiness of Bree’s existence, she tells her shrink “I’d like to be faceless and bodiless and left alone.”

As the Nixon era fought the flagging hippie counterculture and sought to take the country back to a right-wing, conservative vision, an increasing paranoia was essayed in a series of seminal American films, notably Coppola’s superb The Conversation,  Schlesinger’s Marathon Man,  but Klute  was the first to set the tone. Pakula subsumes the overt political overtones by focussing on the personal trials of Bree, a woman at odds with the world, at odds with herself. The film is also a product of the nascent feminism movement, then in its Second Wave and redefining many conventional notions of the role of women in western society. After the realignment of women’s roles in World War II, it was only a matter of time before the fairer sex demanded a fairer balance of roles and responsibilities in a modern world, the counterculture movement provided the perfect impetus for agitation.

Jane Fonda was born into Hollywood royalty, albeit to a famously distant and conflicted father. She took the conventional Broadway ingénue route to stardom and made a series of Hollywood feature confections that revealed little of her true range. A true child of the ‘60s she embraced the liberation and sexual and political challenges that the Baby Boom generation became associated with, and by the time of the Vietnam War she became radicalised in the process. Klute came as she began to flex her celebrity, and she simultaneously ran a series of anti-war rally events with her then lover and co-star Donald Sutherland. She also embraced edgier and riskier roles, like Gloria in They Shoot Horses Don’t They?  and associated with noted leftists like Jean-Luc Godard. Bree was a signal role for Fonda and won her a well deserved Best Actress Oscar, but her politics led to her being “grey-listed” in Hollywood (in her words) and the great roles, already a scarcity in a male dominated medium, dried up for some years.

Donald Sutherland was an unlikely movie-star, a doe-eyed tall streak of goofiness, best suited for character and supporting roles by appearance, but blessed with an elegance and grace which allowed him to add dignity and spice to a huge range of roles. Sutherland excels as Klute, in the difficult and thankless role of the straight man to Fonda’s emotionally brittle Bree, it’s his stillness that allows her histrionics to work so well. Sutherland moved from support to lead courtesy of Altman’s revelatory M*A*S*H,  itself a satire on the Vietnam War, through the prism of the Korean misadventure. Roy Schieder makes a nice turn as Frank, Bree’s one time pimp, and he would go on to make The French Connection  in the same year as he worked steadily towards lead roles.

The film succeeds on every level, thanks in no small measure to the command Pakula displays in only his second feature as director. His experience obviously stood him in good stead as he took chances with tone and pace that many American directors would shy away from. A prime example is the startling 3 minute long close up of Bree reacting to the tape of her friend’s murder in the denouement, a sequence more common in a European art film than a mainstream American film. The composition of the shots are never less than elegant, the work of a master in Gordon Willis, a cinematographer who worked his magic for Coppola a year later in his masterpiece, The Godfather.  Pakula’s talents blossomed enormously in the wake of the films acclaim and his next two films, The Parallax View  and All The President’s Men  are both superbly realised thrillers, forming with Klute  a loose ‘trilogy of paranoia’.

Klute  is a superb and understated thriller, a smart and razor sharp dissection of America at a crossroads, as the squares, the freaks, the hippies and the hipsters all realise the American Dream is not a ‘one size fits all’ proposition. The film is also an enduring reminder of Jane Fonda’s talent and a reason to rue the small mindedness that followed in the wake of her ‘Hanoi Jane’ scandal, a wrench that denied her quality roles in the prime of her life. One wonders if the same fate would have befallen her had she been a man? 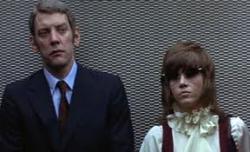 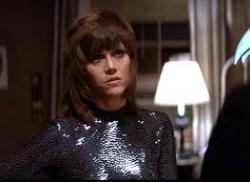 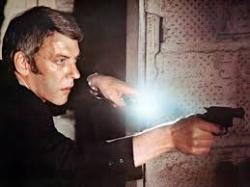 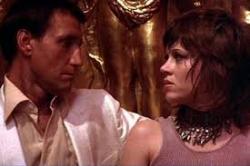