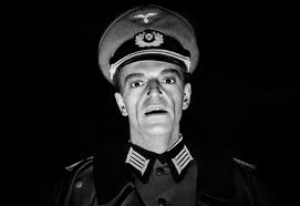 Jean-Pierre Melville managed to lure the rights to the classic novella of the French Resistance by Vercours from the clutches of well-known actor Louis Jouvert, by the audacious act of informing the author he was making the film regardless. Melville, an ex-resistance fighter himself, then colluded with the demanding author, even filming on location at the writer's house, in order to create a film sympathetic to the author's vision. Vercour's conditions were so strict that Melville had to consent to a pre-release screening to resistance luminaries, and if they disapproved of the end result Vercours had the right to destroy the negative, if not the rights were officially his! Mon Dieu, no pressure then....  Melville cast Howard Vernon in the difficult part of Commandant von Ebrennac, the German officer who invades the cosy house of elderly Frenchman (Jean-Marie Robain) and his striking young niece (Nicole Stéphane) and gave a young cinematographer named Henri Decaë, who then took a front row seat to view the birth of the Nouvelle Vague.

Ebrennac makes an entrance worthy of Dracula, Melville choosing to light his striking features from below, as if to announce an invader from another world. The old man and the niece decide to take a passive stance, forced, as they are to house the intruder, and further they refuse to talk to him or even acknowledge his presence. Ebrennac proves to be a cultured and decent man, and this gives the pair pause for thought as the Nazi officer and Francophile confounds their expectations. Ebrennac waxes lyrical about French literature and German music, "Bach could only be a German", in long soliloquies and one-sided conversations. Ebrennac leaves the house twice, to make visits to his idealised Paris, the first time he is enraptured, seeing the city as he'd always dreamed of it, the epicentre of beauty and culture. Ebrennac's association with other Nazi officers taints the second visit, and he finally awakens to the fact that not all Germans share his romantic aspirations for France.

Melville's mise en scène achieves a remarkable and stark formalism in 'La Silence De La Mer', something that patently influenced Robert Bresson, who took his lead from it, and then managed to take it even further and turn it into a personal vision. Melville revels in the theatrical nature of the setting, but finds fresh and interesting angles to shoot the material, allowing at once a degree of retrained artifice and a heightened naturalism. Howard Vernon gives a wonderful performance as the conflicted Nazi, and has to carry the majority of the film on his shoulders. The optimism with which he arrives is worn down to abject despair as the realisation of his complicity in the destruction of a culture dawns upon him, and Vernon plays both realities equally well. Stéphane is gorgeous as the silent girl, developing a love for the officer despite herself, but only able to express it in the most subtle ways. Melville would test her abilities again shortly when he used her superbly in the Cocteau scripted 'Les Enfants Terrible', as one half of the central brother-sister act.

Melville taps into the tradition of the decent German officer that Renoir examined in his brilliant 'La Grande Illusion', where Erich Von Stroheim played Von Raufenstein, a WWI officer who maintained cordial relationships with his French prisoners. Melville contrasts Ebrennac with the other Nazi's, as if he is a throwback to the idea of the gentleman officer like Von Raufenstein, surrounded by the particular barbarism of totalitarian Nazism. "We have the opportunity to destroy France, we'll do it with a smile", they tell him. Ebrennac believes that the "French intellect, subtle and poetic" will "cure" the rough edged Germans, and naively believed France would welcome the invaders and embrace the opportunity. Melville portrays he idealistic and romantic nature of Ebrennac in the scenes where he's dressed in civvies, but closes the concept with a thud when the truth is delivered in full Nazi regalia. "Everything I have said, you have to forget", says the shattered officer, realising that Nazisim is unlocking a particularly nasty streak in the French, having witnessed the same anti-semitic behaviour he saw and despised in Munich.

Vercours insightful story uses music as a basis for unlocking the paradox of a decent man caught in an indecent system. Ebrennac writes his own music, as "a way of arriving at the truth". German music as expressed by Betthoven and Bach remains a cultural high point of Western Civilisation, and the idea that the inheritors of that tradition are uncultured barbarians is a strong undercurrent. Ebrennac says music is "beyond man, beyond flesh", as it expresses sentiments that words cannot, fumbling for the sublime and the transcendent. Ebrennac is brought back to earth with a thud, particularly when a fellow Nazi mentions Treblinka, the notorious Polish death camp, and tells him Treblinka closed down because "there was no-one left to execute".

Melvlle's resistance history may have allowed him to complete and show the finished film, but it was far from the full story. Many right wing Frenchmen, particularly on the Catholic side, were complicit with the occupiers in persecuting the local Jewish population. The Resistance, in the main, was driven by the left, and the communists that represented the bulk of the war-time resistance against the fascists soon found themselves out of favour in a post war Cold War climate.

Melville's career course became defined, in many ways, by the making of and the success of 'La Silence De La Mer', his breakthrough film. The maverick path proved to be his destiny, fighting against entrenched bureaucracies to maintain a vision and a style that was never easily categorised. Melville teamed up with another iconoclast for his next feature, Jean Cocteau's 'Les Enfants Terrible', and created another indelible work, before embracing the crime milieu with his gangster flic 'Bob Le Flambeur' in the mid '50's. 'La Silence De La Mer' still stuns in it's simplicity and it's textures, a triumph of cinematic skill and commitment, an enduring French classic. 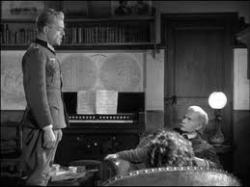 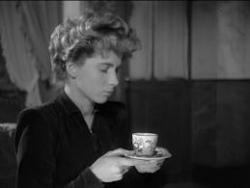 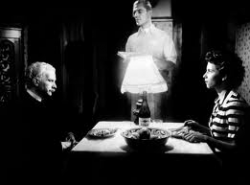 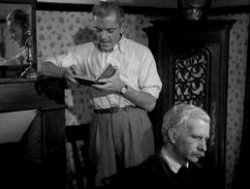 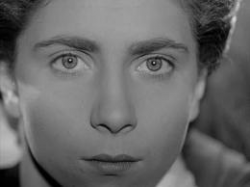 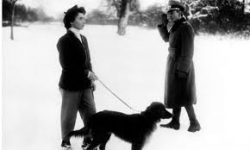