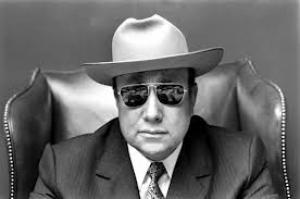 In the late '40's and 1950's in France, during the era derisively called cinema du papa by the future Nouvelle Vague critics, Melville stood almost alone in providing cinema of edge and worth. Born Jean-Pierre Grumbach, from Jewish parents in the disputed Alsace region, he joined the French Resistance in WWII to oppose the Nazi occupation. he took the name Melville after Herman Melville (Moby Dick) one of his favourite authors, and spent the rest of his life having a love affair with all things American.

Melville forged an independent path into filmmaking after his failure to attract studio support after the war and produced two of the most startling and compelling pieces of post war French cinema in 'La Silence de la Mer' and 'Les Enfants Terribles'. The former was a brilliant and simple examination of the relationship between occupier and the occupied, where a Nazi officer billets with an elderly man and his niece during the war, coming down for silent dinners in the evening and attempting to broach the uncomfortable divide. The latter a collaboration with the famous artist and poet Jean Cocteau was a superb and evocative look at an obsessive and all encompassing brother-sister relationship.

Melville prickly nature and maverick ways made it difficult for him to maintain his output, but eventually he found his stride with 'Bob Le Flambeur', a wonderful and atmospheric look at criminal life in Montmatre. The Nouvelle Vague directors embraced the Melville ethos, location shooting and less 'grandeur' than the tradition of quality  they despised, and Godard returned the debt by casting him in a small role in the iconic 'Breathless', as a famous writer being interviewed by the Jean Seberg character. Melville made another occupation era film with 'Léon Morin, prêtre', starring French cinema sensation and icon Emmanuele Riva, before working again in the policier genre with Leon co-star Jean Paul Belmondo, in 'Le Doulos'.

Melville worked exclusively in the world of the criminal for the remainder of his career, with the exception of his resistance masterpiece 'L'armée des ombres', producing superb and iconic examples with 'Le Samourai' and 'Le Circle Rogue'. Seberg asks Melville in 'Breathless' what he hopes to achieve, and his character replies, 'To become immortal, and then die'. Melville achieved a kind of cinematic immortality with his legacy of personal and compelling cinema, setting his direction based on his own vision and not compromising for an industry that had rejected him. Jean-Pierre Melville was a master filmmaker and remains an essential director for anyone interested in the roots of French cinema.