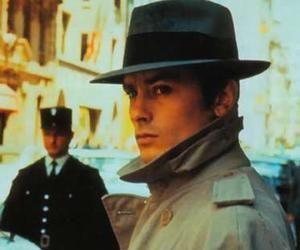 'I'd like viewers to come away from my films unsure whether they've understood them. I want to leave them wondering.' ~ Jean-Pierre Melville

Melville began his film with a self-penned fictional quote from the Bushido, the Samurai bible as it were, where he likens the solitude of the Samurai warrior to that of a tiger... perhaps? It's a neat conceit that sets the film off on exactly the right tone. Like most Melville 'policiers' it's more like a forensic dissection of the lawman/criminal divide, than a shoot 'em up, cops and robbers car chase type flufferie. Mood is everything and the muted cinematic tones and hues speak in whispers where others shout. Melville long held the ambition to shoot a black and white film in colour, and this may be as close as he got.

The opening shot is Jef Costello's (Alain Delon) apartment with Jef lying on his bed and a pet bird tweeting gently in its cage. Immediately Melville undermines the genre with gentle humour, what kind of a hitman has a pet bird? Of course given the existentialist overlay Melville invokes, it also serves as a metaphor for just how much Jef is himself in a cage. The movements are so spare and the dialogue minimal to say the least, in lesser hands than Melville's it could fall flat. Where modern editing in post MTV age is all about cut and move, here it's all about poise and stillness. Jef is psyching himself up for a job, meditating himself into the zone he needs to be in to go out and shoot a stranger dead for money. Melville prepares the mood so well that Delon can show he's in the required state by as little as an adjustment of the brim of his hat.

Melville always makes great play out of details, so we see Jef establish the alibi he'll need after the job is done. His visit to the apartment of his girlfriend Jan, played by Delon's then wife Natalie, is one moment when the steely reserve is let down for a second, but it's apparent that Jef's path is a solitary one and a girlfriend is a luxury that he can dispose of instantly if required. The job goes smoothly enough, even though Jef is eyeballed by the beautiful dark skinned nightclub singer Valerie (Caty Rosier), and he is rounded up in the police sweep of usual suspects later that night. The Inspector running the case (Francois Perier) thinks Jef is the culprit and sets out using all his resources to nail him. Valerie gets the opportunity to finger him in a police lineup, but does not, giving Jef an opportunity to go and collect his pay,but when Jef goes to the meet to do so he gets more than he bargained for. So now Jef has the police trailing him and the criminals he worked for trying to kill him.

The procedural aspect of police work is emphasised by Melville, showing in great depth the co-ordination and legwork required to run a large investigation. By doing this Melville is attaching value to the work, in the same way that Jacques Becker would show the actual time and effort it takes to dig a tunnel in the prison break film Le Trou, it forces the audience to stay in the moment, to build the sympathy and tension and emotional investment in the act. It's a technique eschewed by modern directors mostly, favouring the shortcut or bombast of a special effect driven piece, but Michael Mann certainly employed it to great effect in his masterpiece Heat.

In contrast to the 'real world' aspect of the pursuers, Melville creates a mythology of the lone wolf hitman. Where the cops are tied down by rules and procedures, the criminal is like a great artist creating opportunity and improvising with his own innate talent. Melville may allow the 'plod' of police work to eventually take down the genius, to clip the wings of the high flying bird, but it's a triumph of the mundane over the special. The motifs Melville employs to indicate Jef's mental state and awareness build a picture of an obsessive mind. So sharp he can detect a change in his pet birds behaviour, seeing the mess in the cage caused by a prior agitation and knowing therefore his apartment had been breached and compromised. Jef knows the rules of the game, and after it tips in favour against him, he plays the hand to it's inevitable conclusion. Jef through his actions becomes an anachronism, unable to exist any longer in the criminal milieu and not able to fit into the 'respectable' world of Jan, he resigns himself to the fate of a warrior without a war. Melville has Jef's Sansho in the form of his mechanic, who wordlessly prepares his steed with fake plates and hands him his lance in the form of a handgun. Jef goes off for one last glorious windmill tilt, and fronts up to the scene of the crime, to deal with the eyewitness singer.

Melville created an homage to American gangster film and invested it with an existentialism that breathed new life into an old form. 10 years before Star Wars made mythology an obligatory component in every half-assed feature, Melville was scheming to use those archetypes to build mystery and depth with elan and taste. In a master's hands a movement conveys a world of meaning, a gesture speaks volumes and silence can be devastating. This film is the perfect antidote to the all flash and no substance crime films we've since had to endure. The past is a foreign country, they made films differently there. 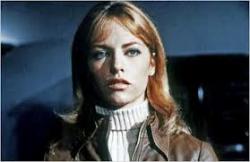 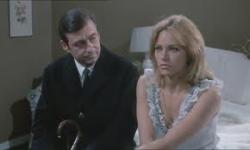