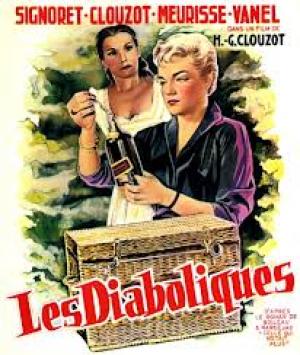 Henri-Georges Clouzot used the international clout he’d garnered with the success d’estime  of The Wages of Fear  in the early ‘50’s to turn his attention to a much sought after property, a Boileau and Narcejac  novel called Celle qui n'était plus .  Much of Clouzot’s latter reputation as the ‘French Hitchcock’ stems from this film, and it was rumoured that Hitchcock himself was keen to film the novel, in fact shortly after he produced Vertigo,  from a source novel by the same authors. Hitchcock certainly utilised one of Clouzot’s marketing devices from Les Diaboliques,  where he urged viewers of Psycho  not to spoil the film for their friends by revealing the end twist. Clouzot also used the film as a vehicle for his Brazilian wife Véra, giving her the lead role of the wife of the school’s headmaster, one of three films she acted in for her husband.

Christine (Véra Clouzot) is the frail and much put upon wife of the brutish Michel (Paul Meurisse) and together they run a boarding school in Paris. Michel is openly having an affair with another teacher, the voluptuous Nicole (Simone Signoret) but he seemingly treats her no better than his wife. The mistress and wife both conspire to do away with Michel before he kills one of them, and together they hatch an elaborate plot to do the deed during a long weekend break. The school reconvenes after the break with no Michel in sight and Christine reports him missing to the police, at which point a retired Inspector (Charles Vanel) gets personally involved in solving the case.

Clouzot coats the piece in a grubby and unsettling atmosphere, using the dilapidated boarding school setting to underscore the decaying humanity on show. The tale is redolent with a nastiness not often seen in films of the era, and has as much cynicism as any Billy Wilder film ever contained. Clouzot’s tyrannical behaviour on set reportedly extended to his serving of actual rotten fish to the cast in a scene where the cheapness of the headmaster is revealed. Clouzot spent several years as a young man in a sanatorium with a debilitating illness, and it seems to have contributed to a signature directness in his art, or at least to have knocked out any regard to sugar coating his dealing with people.

Clouzot counterpoints the evil of the central precept with the innocence of the children at the school, unwittingly caught in the treacherous machinations of the adults. Christine seems to have more in common with the children, whereas the hardness of Nicole speaks to a different dynamic, one that contrasts the sexuality of both women. Christine seems ethereal, even asexual in some ways, whereas Nicole exudes sexual allure and this dichotomy underpins the narrative arc, Clouzot ably delineating the psychological implications of these opposites. Clouzot also hints at a mystery beyond the dirty deed at the heart of the plot, and uses the innocence of a schoolboy at the end to leave even more questions hanging.

Paul Meurisse delivered a deliciously nasty turn as Michel, and would work with Clouzot again years later in the Bridgette Bardot hit La Vérité,  a film co-written by Véra Clouzot. Simone Signoret is wonderful as Nicole, and provides the necessary ambiguity needed to make the scenario work effectively, but it’s Véra Clouzot who stays in the memory with her delicate portrayal of Christine. Incredibly she had a heart condition not unlike that of her character in the film, and sadly would die prematurely a mere 5 years later, an event that sent Henri-George into a spiral of depression. Charles Vanel, who’d triumphed in The Wages of Fear  for Clouzot chimes in with a nicely understated and cynical characterisation of the Inspector.

Les Diaboliques  manages to tread a difficult line between horror and art, thanks to the meticulous approach that Clouzot employed, a characteristic he certainly shared with Hitchcock. Clouzot manages to extract maximum tension from unlikely sources, and also some black humour to contribute to the tone, exampled by the scene where Christine is watching from her full class room while the pool is being drained and she has her class conjugate the verb ‘to find’. While Clozuot goes to elaborate lengths to achieve tremendous detail in his films he never oversteps the mark, somehow managing to create a complex simplicity with his incisive eye.

Clouzot’s films are simply symphonies of superb and elegant visual set up’s and brilliant editing, master classes in cinema, and Les Diaboliques  leads the case for the prosecution. Like other great horror films The Innocents,  Psycho  and Eyes Without a Face,  the film disturbs via the unseen as much as the seen, the implications of terror of the mind rather than overt gore. The film represents a peak of Clouzot's artistic vision as he soon became victim of a campaign by the hip critics of Cahiers du Cinéma  that condemned traditional French cinema, and then swiftly blew away the alleged practitioners of the form with the hurricane winds of the Nouvelle Vague. Ironically the cabal that lauded Alfred Hitchcock contributed to the downfall of the ‘French Hitchcock’, a man that the real master of suspense admired immensely. Whoops. No matter, classics like Les Diaboliques  outlast all misguided attempts to smear and besmirch, and Clouzot's cinema will outlast them all. 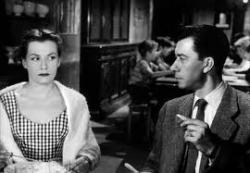 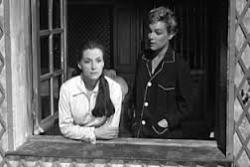 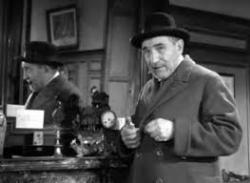