In the key of Jeanne

In the first flush of the Nouvelle Vague in 1960, when Jean Paul Belmondo was it’s walking personification and Jeanne Moreau was the darling of them all, Peter Brook’s ‘Moderato Cantabile’ appears teaming them as doomed lovers. An oddity amongst it’s more lauded contemporaries like ‘Breathless’, ‘Les Amants’ and ‘Hiroshima Mon Amour’ (with whom it even shared the same author, Maguerite Duras) in that it harked back to the Poetic Realists of the ’30’s in tone and feel and was directed by an English theatre director. It has seemingly never received it’s due in the retrospective assessments of the Nouvelle Vague even though it contains a performance that won Jeanne Moreau a deserved best Actress at Cannes in 1960 and pointed the way to the pinnacle she’d attain in ‘Jules et Jim’ a mere two years later. One must conclude that it’s the auteur theory itself that’s held this excellent film back as the name Peter Brook is not likely to appear on any auteurs list of accomplished directors of the period, coming as he did from theatre and in a long career only directing a handful of films (Lord of the Flies notably) and no other that would fit under the Nouvelle Vague umbrella.

The gentle triplet piano opening of the Diabelli sonata that evinces the title, a musical instruction meaning gently and singingly, sets the tone for an opening scene involving a young boy taking his piano lesson, his loving mother Anne Desbaredes (Moreau) looking on. A commotion on the street below ensues after a woman’s cry is heard coming from the downstairs bar. Anne and son exit the lesson to find a crowd gathered around peering into the window, she looks and sees a woman’s body on the floor, blood near her head, soon a man bends down to kiss and stroke her head, before police lead him away in handcuffs. Chauvin (Belmondo) is a steel factory worker in the port town and spies Anne in the crowd. Anne has dinner with her husband that night, a formal and staid affair in a massive mansion, her husband indifferent and cold to her. The next day Anne goes back to the bar, and awkwardly orders a wine, quickly downing a second. Chauvin is there and walks across and buys her a third wine, as she asks about the events of the day before, ‘I wondered about the cry’. Chauvin identifies her as the wife of the Director of the factory, indicating the source of her unease and agrees to find out all he can about the background to the murder that haunts her. Next day Anne and son skirt around the bar, but walk along the dock and catch a ferry, Chauvin sees her and follows. The son remembers a happier time with his father and mother on the same ferry years before. Alighting at a smaller village with a decrepit cafe, her son plays with local children while Anne takes a seat at the cafe. Chauvin walks in, he proceeds to tell her of what he knows of the murder, how the lovers met and of their situation. Anne sees an exact parallel in her own life.

Chauvin admits to Anne he has been watching her for some time, since seeing her at a factory party wearing a magnolia. ‘You kept crushing the magnolia’ is a comment that reinforces the feeling of beauty being ground down. Chauvin walks around the grounds of the mansion at night, it’s fence approximating prison bars. Anne sneaks away from her regimented life to meet him, ’I’m so closely watched’ she says, and in one of the most poignant scenes he caresses her face, they don’t kiss, and yet it must be one of the most beautiful and erotic love scenes filmed. She’s seen the newspaper reports of the murder and knows Chauvin made up his story that resonated with her, but says’ tell me more, even if you have tyo invent it’. A child’s toy bounces their way, interrupting their reverie. Chauvin abruptly changes tone and demands she ‘go away’. At the next piano lesson he son is scalded by the authoritarian teacher, clearly she’s scandalised by what is common knowledge in the town, of the affair between Anne and Chauvin, and is directing the anger to the child. An elaborate dinner at the mansion is under way but Anne leaves, walking into town and into the bar, stopping the locals dead as she does so. She begs Chauvin to see her again after the dinner. She endures the interminable small talk of the local bourgiousie as long as she can, but wanders off to her sons bedroom, kissing him while he sleeps before collapsing on the floor, her husband finds her and asks, ‘what will I tell the guests’? ‘That I’ve gone mad comes the reply. Anne goes to the now deserted bar and Chauvin informs her he’s leaving, their situation is impossible. ‘I wish you were dead’ he says, ‘I am’ she responds, he walks out and she falls to the floor, in roughly the same area she saw the dead woman, and screams. Her husband pulls up at kerb outside the bar and she leaves and drives off with him.

Brook, for all his theatrical background makes a beautiful and cinematic film, it’s autumnal hues and sombre tones perfectly harmonise with the haunting piano score that centes the film. His real skill is with the actors though, and apart from Moreau’s breathtaking work it’s Belmondo who surprises, his sensitive and beguiling presence a sympathetic sounding board for Moreau’s heartbreaking Anne. The boldness at the length of reaction close-up’s recalls Antonioni at his best and the utter poetic fatalism of the piece is accented at exactly the right points by subtle mannerisms and delicate grace notes, heightening the air of melancholy. Anne’s dilemma of how to escape a loveless marriage, the resonance she felt in that girl’s cry, not understanding  fully the reasons why, that it was the cry that was coming from her as well. She had found solace in the life of her son, who she could sense would also struggle with organised repetition and a life lacking spontaneity, but ultimately realised vicarious living is no living at all, and she was left only to face the fact at the end that there are more ways to be dead than we know.

A surprising and superbly made gem from a golden era of French cinema, Peter Brook, auteur, take a bow. 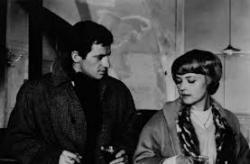 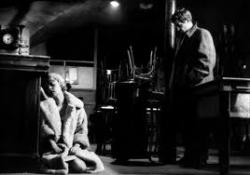 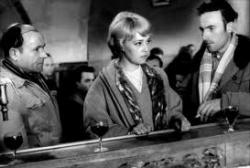 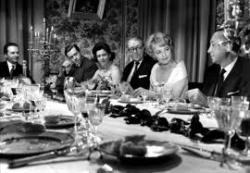