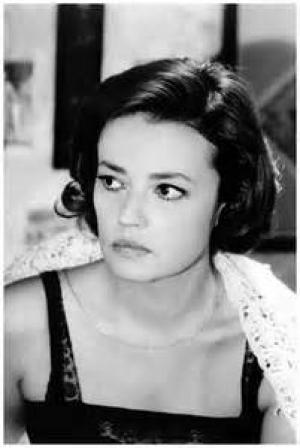 "Beyond the beauty, the sex, the titillation, the surface, there is a human being. And that has to emerge."
~ Jeanne Moreau

Born in Paris, the actress who was to become the face of the Nouvelle Vaugue  in the late 1950’s got her start on the stage in 1947 as part of the renowned Comédie-Française. She picked up a few small support roles in films until Louis Malle cast her as the lead in his atmospheric noir, Elevator to the Scaffold,  and she promptly became a big film star in France. Malle again cast her in his stunning and controversial film Les Amants,  and she suddenly became the most in-demand actress of the era in Europe, with directors from many countries lining up to her grace their films. Oddly, it was Peter Brook,  a British director, who facilitated her only win for Best Actress at Cannes, with the wonderful and under-rated Moderato Cantabile  in 1960, opposite Jean-Paul Belmondo.

Roger Vadim made Les liaisons dangereuses  with Moreau in the role Michelle Pfeiffer would reprise many years later in the English re-make, Dangerous Liaisons,  and François Truffaut made her a world sensation as the centre of the love triangle in the superb Jules et Jim in 1962. Between those films she worked for Orson Welles (TheTrial)  and Michelangelo Antonioni (Le Notte)  becoming an international star in the process. She made Eva  for Joseph Losey , a director she would work for again 14 years later in Monsieur Klein,  and work again with Orson Welles in The Immortal Story  and Chimes at Midnight.  She made the lovely Bay of Angels  for Jacques Demy, and worked with the visionary Spanish director Luis Buñuel in his version of Octave Mirbeau’s Diary of a Chambermaid.

Malle again provided interesting roles for her in both his masterful Le Fou Follet,  and in a ‘movie-star’ piece of frivolity co-starring Brigitte Bardot called Viva Maria!,  signifying her Swinging Sixties box-office clout. Another indicator of her international regard was her small but vital role opposite Burt Lancaster in John Frankenheimer’s excellent war time thriller, The Train.  Around the same time British director Tony Richardson promptly left his wife Vanessa Redgrave for the personal charms of Jeanne and made two films with her, Mademoiselle  and the little seen The Sailor from Gibraltar.  She made the superb, sub-Hitchcock thriller for François Truffaut, The Bride Wore Black,  and worked for the master Jean Renoir in his final film, The Little Theatre of Jean Renoir.

Jeanne continued to be the go-to international female star for most of the 1970’s, working for legend Elia Kazan in his ode to old Hollywood The Last Tycoon,  and German wunderkind Rainer Werner Fassbinder in Querelle. She married American director William Friedkin in a short lived relationship between 1977 and 1979, but never made a film with him. Joseph Losey gave her a role opposite the up and coming Isabelle Huppert (a kind of passing of the torch) in The Trout, and Luc Besson and Wim Wenders gave her worthwhile roles in films into the 1990’s. She worked sporadically in a series of uneven projects until François Ozon gave her a meaningful role in his brilliant Time to Leave,  as a sympathetic grandmother dealing with her gay grandson’s illness.

Orson Welles called her “the greatest actress in the world,”  and her ethereal, natural beauty and grace elevated many a film over the course of an astounding career. The French New Wave presaged a new honesty that found resonance with the counterculture era, where Moreau in particular represented a new woman, one that could be a symbol for the Second Wave Feminists that came to prominence in the late 1960’s, tough yet vulnerable, independent and intelligent. Jeanne Moreau was the perfect international star for the times, an arresting and unconventional beauty, and an accomplished actress whose best work stands with the best of all time.