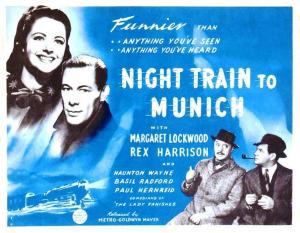 If all had gone to plan and Alfred Hitchcock had directed Night Train To Munich instead of Carol Reed then it may not have become the overlooked gem that it is today. Having enjoyed a great success with The Lady Vanishes in 1939, it was intended to re-form the same creative team of writers Sidney Gilliat and Frank Launder, stars Margaret Lockwood and Michael Redgrave, the comedy pairing of Naunton Wayne and Basil Radford as the sports mad Englishmen Caldicott and Charters, and the last piece of the puzzle would be Hitchcock. Redgrave, however, was locked into a long running play, and the lead part of Dickey Randall was given to Rex Harrison and Hitchcock was lured to America by David O Selznick, and so Carol Reed stepped into the director’s chair.

The film opens with a similar shot to The Lady Vanishes, as if Reed’s brief was to accent the feel that the films were a continuation, on a model of a mountain structure where we close in until we’re inside and watching a certain Adolph Hitler hitting the roof. Newsreel footage of storm-trooper’s jackboots marching through Europe leave us in no doubt as to what the  Nazi’s are up to. In the city of Prague we see German planes coming to alert the locals to their imminent subjugation and a group of key scientists plan to escape, among them is  Axel Bomasch (James Harcourt) who’s working on a new armour plating process. Bomasch warns his daughter Anna (Margaret Lockwood) but as she attempts to join him on his plane she’s arrested by the Nazi’s and interred in a concentration camp. She is befriended by a freedom fighter, Karl (Paul Von Henreid) who organises an escape and the couple flee to England. Anna tracks down her father, but is betrayed by Karl and soon father and daughter are back in Germany and held prisoner. Dicky Randall (Rex Harrison), an English spy who assisted Bomasch when he was in England decides to go and rescue the couple.

The filming of Night Train To Munich was largely done during the period of the phony war, and the extent to which the horrors of the Nazi camps was still unknown, and may explain the several light hearted touches here and there. The war is also still something of a ’Gentleman’s war’ and the lead character played by Rex Harrison takes a cavalier attitude, or one of wry bemusement, but this was during a period where it was common to belittle the German notion of the master race, and still keep the English ‘stiff upper lip’ image as a first line of defense. The Archers address the same attitude in The Life and Death of Colonel Blimp, coming to the conclusion that the rulebook needed to be thrown out against the Nazi’s and it was better to fight fire with fire.

The script is fantastic, sharply witty and slightly risqué in areas. Rex Harrison plays up the sexual implications in his forced relationship of his character with Anna, who gives as good as she gets ‘If a woman ever loves you as much as you love yourself it will be one of the great romances of history’. Ouch. The writing takes the micky out of German bureaucrats and equally British ones, with delicious lines about pickling walnuts. Reed gets the most out of Charters and Caldicott by having them shoved around at a train station, moved on 3 times until their patience runs out, a neat metaphor for letting ‘appeasement’ go too far. Once the placid Englishman is called to action however, all bets are off, and in the same way as the lads come through in The Lady Vanishes they also step into the breach here, albiet dressed as slightly comical German soldiers. there is a beautiful visual gag that gets the pair back onto a moving train, and again when they tie up some soldiers, gagging one of them with a copy of ‘Mien Kampf’.

Harrison has great fun with what is essentially a comic role, and apparently loved dressing up in the uniform! What his beautiful German wife,  Lilli Palmer (so memorable as John Garfield's girlfriend in Body and Soul) thought of this is anyone's guess? Lockwood is lovely as his foil, even if the sexual spark that lit her scenes with Redgrave in the previous film is not quite there. Henried is very effective as the cool Nazi and he soon left for Hollywood, and a kind of immortality playing Victor Lazlo in Casablanca. Reed went on to have a stellar career for many years, and even if here he seemed to be filling out a carbon copy Hitchcock application the film has enough sparkle and wit and pace to entertain even at this great distance. No mean feat. Gilliat and Launder became a British institution and as a team of writers/producers/directors were responsible for 40 films from the early ’40’s to the ’70’s. Night Train To Munich remains a high point for all those involved, Hitch or no. 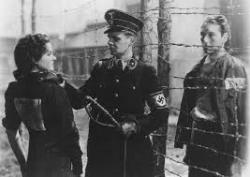