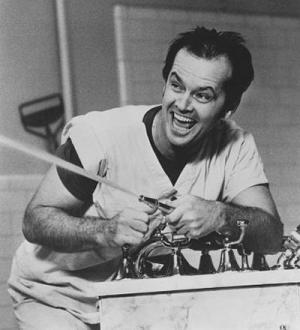 One Flew Over The Cuckoos Nest

A little dab'll do ya

In 1961 Kirk Douglas acquired the rights to Ken Kesey's novel and had it adapted into a play by Dale Wasserman which he took to Broadway, with him playing the central character R P McMurphy and with Gene Wilder playing Billy. The play was not a hit and Douglas soon abandoned any notion of filming the property. 10 years later his son Michael Douglas took the project on and was reminded by his father of a director he had met in Czechoslovakia years before who he thought was right for the job, Milos Forman. Michael contacted Milos and was sold on his vision for the film, and also the fact he was not a name Hollywood director and was therefore comparatively cheap, as mainstream Hollywood was not keen on financing a film set in a mental asylum and money was tight. Forman saw the story and setting as a metaphor in microcosm for the repressive and anaesthetized society he had lived under in his communist country and this approach gave the film it's realism and natural core. Michael Douglas offered the part of McMurphy to Marlon Brando and to Gene Hackman, both passed and he settled on Jack Nicholson on Hal Ashby's recommendation, who directed him in The Last Detail which had the harder edged character that convinced Douglas he was right for McMurphy, so much so that they waited 6 months for his schedule to free up to start filming.

Forman frames the opening with portent and an underlying dread, a car approaches an austere medical institution and McMurphy is decanted, handcuffed and curious. It transpires that he may be faking a mental condition in order to do easier prison time than the work farm he was on, the unpleasant fact that he's been convicted of rape is never dwelt upon. The Doctor advises him that they'll be assessing him for a period of time and he'll be under scrutiny and will need to follow the rules. McMurphy's first encounter with the dedicated and committed, in another sense, Nurse Ratched (Louise Fletcher) is at a group therapy session where he sees her controlling style in action. The in-patients are all dominated by her and squabble and bicker with each other while she tries to create order where there is none. Forman visually keeps McMurphy separate at this point, dressed in denims rather than hospital white, as he takes in the full scope of his predicament and assesses the pecking order of staff and patients. McMurphy starts to get involved in the life of the facility by playing games, at first outside in the yard with a close to seven feet tall mute Indian called Chief (Will Sampson) and later in a card game with the more mentally proficient patients. The game metaphor is apt as McMurphy appears not to be able to take anything seriously, and his entire reason to exist is to play games with life at one level or another and suck as much entertainment for himself out of it in the process.

McMurphy observes the morning medication ritual, and Forman sequences it as a macabre dance routine where he plays nondescript muzak through the hospital PA system as the patients line up to take their pills. McMurphy starts to chip away at Nurse Ratched's authority, complaining about the music, demanding they be allowed to watch the World Series baseball game on TV, and questioning his medication, at which point Nurse Ratched offers an alternative method of delivery (anally). Mac takes bets that he can annoy Ratched until she cracks, and sets about to do just that, another game to play. At the next group therapy Mac is dressed in white, outwardly conforming, his World Series request is put to the vote, Ratched secure that she'll win the day and routine will prevail over innovation. Mac loses the vote and he hatches a mad plan to uproot a massive stone water cooler and hurl it through a window to break out. With the 'inmates' watching he strains to make any impression at all, the cooler remains in place, 'But I tried, godammit, at least I did that' he says to everyone and to no-one, and to himself. Mac manipulates a second vote, and is effectively cheated out of a win by Ratched, and so he starts to call an imaginary game much to the amusement of the guys, who are now warming to Mac's anarchic behaviour. What started out as a game soon becomes a power struggle for the 'souls' of the patients, Mac convinced he's doing them good by bringing them out of their shells, and Ratched convinced they need to stay in them, medicated and compliant. Mac stages a 'breakout', stealing a bus and taking the boys out for a fishing trip, picking up an old girlfriend on the way. The introduction of the patients to the harbourmaster 'This is Doctor Chiswick'... is hilariously effective and oddly convincing. Forman was against this sequence, wanting all the action contained in the facility, but came to admit it was a crucial element to the film's balance.

The aftermath of Mac's trip brings him into confrontation with a mind snapping reality, that the co-patients he shares the ward with are almost all there voluntarily. The event also scores badly in his assessment, but curiously Ratched votes to keep him at the facility, obviously she's convinced that her methods will eventually prevail over Mac's. The hospital guards, resentful of Mac's disruptive influence, goad him into a fight with the information that under the rules he can be held at the facility indefinitely, the resultant brawl gives the hospital the trigger to start Mac on a course of electroshock therapy. Mac plays up the results of the therapy, much to the amusement of the guys, but in the process he discovers that Chief is not deaf and dumb after all, and will be happy to help Mac in escaping, now made more urgent by the dawning gravity of his situation. Mac organises a 'farewell' Xmas night party for the boys, getting Candy and a friend to drop by with booze and bribing night guard Turkle (Scatman Crothers) to facilitate the event. Billy (Brad Dourif), the shy stuttering young man dances with Candy, and even as the open window beckons Mac insists that Candy treats Billy to a night he won't forget before they leave. The party peters out in the wee small hours as Mac and the others all pass out with the effects of the booze and pills, only to be discovered in the morning by an apoplectic Nurse Ratched. Billy and Candy are discovered together and Billy fluidly explains what happened to the gathered group, only to have Ratched coldly cut him down and ruin his new found confidence. Billy withdraws to a room and slits his wrists, and Mac finally snaps with the news and chokes Ratched half to death before being knocked out by a guard. Mac falling unconscious on top of Ratched is framed like some bizarre sexual consummation and given the lascivious nature of Mac it can't be discounted as unintended. The full force of institutional punishment is brought to bear on Mac, and in a touching ending Chief sets Mac free, and then himself via the water cooler, which he picks up and hurls through the window, to the strains of Jack Nitsche's haunting theme.

The film works superbly at several levels, even though Ken Kesey disowned the end result, apparently without seeing it, after he fell out with the producer's over the change in focus from the book, where the Chief is the central narrator. Despite this the film is faithful to the tone and tenor of the book and all the central incidents and characters are kept. The device of the institution-as-prison, in many cases self-sentenced, works beautifully as the lines between punishment and help are continually blurred, and revealed for what they are by Mac's games and provocations. The action is propelled by magnificent performances, anchored by Nicholson and Fletcher. Fletcher's Nurse Ratched is clinically cool, all the more chilling because of her calm demeanor and flat delivery, the faux concern a mask she almost never drops. It is however a Nicolson tour de force, his Cheshire grin and edgy presence dominates the film as few actors could, turbo charging his career after a string of wonderful roles in Five Easy Pieces,  Chinatown and The Last Detail et al. After Cuckoo's Nest Nicholson would be he go-to star for any A-list project, and his performance was recognised by most of the big awards including the Academy and Golden Globes, as was Fletcher's. Forman deservedly walked away with most Best Director gongs and Douglas and co pocketed the Academy Award for Best Picture.

The allegory of a totalitarian regime destabilised by sheer force of one individual's personality must have been a powerful one for Forman, as his home country struggled to throw off the repressive regime it had laboured under for years. He insisted on filming in the actual location where the book is set, the Oregon State Hospital, and garnered key support from Dr Brooks at the facility (who played Dr Spivey) and this adds a verisimilitude that money can't buy. All the actors spent a lot of time with the patients and invested time in rehearsal that ensures every little role hits the right note, with several in the cast going to have significant careers. Kesey worked as an orderly in a similar institution and having the book published in 1962 it might have dated for the post Woodstock generation that the film spoke to, but the rebel-as-conscience/liberator is a motif that spans most generations and this is a worthy successor to Brando in The Wild One, Dean in Rebel Without A Cause and Newman in Cool Hand Luke, the structure of which it most closely resembles. A masterful ensemble piece to be sure, but all hail King Jack. 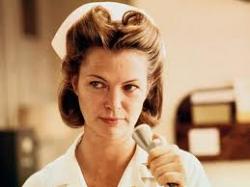 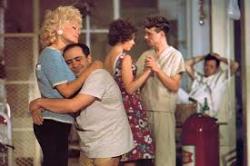 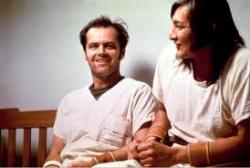