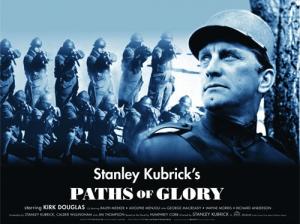 Any film set in the trenches of the western front during the Great War cannot help but be an anti-war film and this, at every level, is one of the best. The war saw a particular madness of generals, wedded to Napoleonic era tactics of a ‘moving’ war, being caught in a wire and trench stalemate and dreaming of a cavalry breakthrough. 1914 brought with it with the added horror of weapons developed by post industrial revolution factories, mass produced on a scale not before dreamt of, and capable of slaughter that would make Napoleon blush. Humphrey Cobb illuminates a little known fact, suppressed by military censors of the time, that the French court martialed and sentenced 500 of their own men to death during the conflict and carried out the executions in 60 odd cases.

Kubrick builds his story around the arbitrary nature of one man per battalion drawing lots, or here being selected by junior officers to be punished on behalf of the many. Kubrick contrasts the luxury quarters of the generals, with the day to day squallor of the trenches. George MacReady (Mireau)and Adolphe Menjoue (Broulard) are old school warriors, all mannered formality, most likely longing for a more stylish war than the one they have, with dash and cavalry, they are already relics. They also know how the game is played though and that it’s sometimes neccessary to bow to political expedience.

Kirk Douglas is Colonel Dax, living in the trenches with the men the generals see only as statistics. Dax is given an impossible task, taking the ‘ant hill’, without artillery support, to satisfy this political agenda.   Kubrick is in no pensive mood, Dax stalking through the trenches like a caged tiger is Douglas at his best. He tracks the men racing across no mans land, in a series of bravura camera moves, putting us with Dax, in the middle of the carnage. The story unfolds as quickly, with no sentimentality to slow it down, and in no time the 3 hapless soldiers are selected and the mock trial begins.

Dax is the conscience of the film, an idealist who knows how it must play out, but hopes against hope that reason will prevail. In a war where 3 more lives lost would seem trivial compared to the millions that were blown to pieces, Dax is determined to state his case, even if no-one is listening. The proceedings have a pre-determined outcome, and the generals only hope the condemned ‘die well’. The folly is played out to it’s ghastly climax, the result slightly leavened by Dax having Mireau  revealed as having given an order to shell his own men to force them from the trenches.

The truth of that war is on display here, no small feat in 1957, when official histories were antiseptic and less than forthcoming. Infantry were ground into the killing machines, forced into mad forays against well fortified positions where German machine guns could fire 600 rounds per minute! ( yes, per minute). The fact that men went forward at all should still astonish anyone who knows the facts. This is why to be tried for cowardice was such an insult, such a black joke, and why large parts of the French army mutineed in 1917. Kubricks keening eye cuts to the heart of each situation with deft set ups, and elegant framing, curiously juxtaposing the madness on display. He is saying to us, future generations will scarcely believe this happened, yet it did. The final scene is touching and human and reminds us of the reality behind the mind numbing statistics, where one day on the Somme in 1916 on a 20 mile front, cost 20,000 allied lives and another 40,000 injured. General Haig thought that with ‘divine help’ they would prevail. He was wrong.

Anti war? I doubt Kubrick was making a pro war film. He certainly seemed to want to empathise with the grunts here and in Full Metal Jacket 30 years later, even if the next time he turned to modern warfare he used satire and Peter Sellars. Paths of Glory is a hard lesson, a slice of ’man’s inhumanity to man’, impossible to ignore both as history and as cinema. 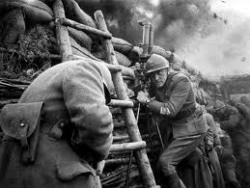 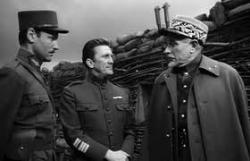 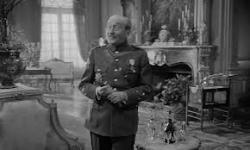 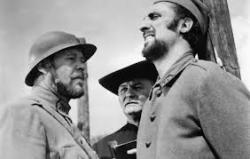 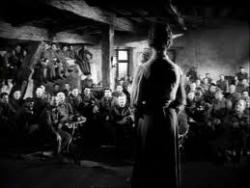