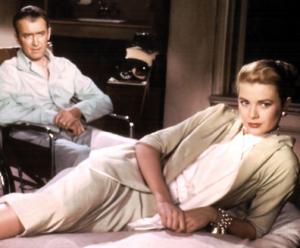 I spy with my little eye.... phitch perfect.

Arch fetishist Hitchcock combines two of his primary vices, voyeurism and ice-cool blondes, in this fabulous microcosm of humanity, laying bare the impulses that surge and compel, and demonstrating that some itches, however unattractive, still need to be scratched. Hitch delivers as impotent a leading man as has ever served his delicious malevolence, confining Jimmy Stewart to a wheelchair for the duration and adding to his frustrations by tempting with one of cinema’s great beauties, the flawless features and elegant lines of Grace Kelly. Hitchcock’s continued truism, that everyone is interested in murder, is again a central part of uncovering a kind of banal evil in the most unexpected place, a Greenwich Village apartment block, where all the tenants face a central courtyard view from their windows, which also enables them to see into each other’s rooms. Hitchcock plays upon the urge to observe ‘the other’ and in doing so to see into ourselves.

During a hot New York summer Hitch reveals ‘Jeff’ Jeffries (James Stewart), broken leg in a full cast, and in a reminder of his silent cinema training he tells us everything about Jeff wordlessly and economically by a series of photos, a broken camera and some magazines. We can gather he’s been injured on assignment, and also has a connection to the fashion world, which is confirmed by his girlfriend Lisa (Grace Kelly) when she arrives. An insurance nurse Stella (Thelma Ritter) encourages Jeff to marry Lisa, although Jeff feels he’s not worthy of her, as she’s an upper-class socialite, used to the very best and he’s an adventure photographer who’s used to roughing it. After 7 weeks in his apartment Jeff’s bored out of his mind and his whole world revolves around the goings on of the other tenants, and with the summer heat all of the blinds are mostly left open, revealing the various people and their pursuits. Jeff sees "Miss Lonelyheart’, a sad woman who has imaginary companions around for dinner, and ‘Miss Torso’ a gorgeous dancer who exercises in very little clothing and entertains various men on a regular basis. There’s a struggling composer in one room, an older couple with their pet dog in another. Various couples love, squabble, bicker, fight and make up in full view of Jeff, who is not beyond taking out his binoculars to get an even better view.

Lisa arrives and Jeff  again backs out of commitment, ironically not letting her in to his life as he continues to gain access to the lives of his neighbours in other ways. Jeff soon gets suspicious of Thorwald (Raymond Burr), a salesman with a sick wife who seems to vanish overnight. Jeff sees Thorwald with a saw and large butcher’s knife, and sees him taking something out of the apartment three times in the wee small hours. He tells Stella of his suspicions and she becomes intrigued, conforming to Hitch’s murder maxim, and revealing a macabre side in her speculative descriptive efforts on corpse disposal. Lisa is a doubting Thomas to start but soon enough is caught up in the intrigue, especially after Jeff’s old wartime buddy Tom (Wendel Corey), who is now a cop and who pours cold water on the nascent amateur investigation. Soon enough the ‘glamazon’ Lisa is called to action, and becomes the legs for Jeff as she climbs through Thorwald’s window and finds the wife’s wedding ring, the one thing Jeff had been denying her, but is caught red-handed by the villain. Jeff’s impotence is ratcheted up several degrees by having to watch Lisa struggle with the murderer, a dark reward for his voyeuristic actions, and we’re right there in the wheelchair with him by dint of Hitch’s almost exclusive mirroring of Jeff’s POV for the audience. He never cuts to an interior of the other apartments, we only see in from the perspective of  Jeff’s window, and via the lens he’s using, telephoto or binocular.

The police arrive and save Lisa, but Thorwald has realised who has been watching and sets off after Jeff. Armed with only the tools of his trade Jeff delays Thorwald enough to have Tom arrive, but not before he’s left dangling on the ledge of his second floor apartment, to be ironically thrown out of his own rear window. Hitch tops off this macabre joke by cutting to Jeff post-nuptials we assume, but now with both legs in casts courtesy of the fall. Lisa is now dressed in jeans and a shirt and is reading adventure literature, seemingly being the one who has changed enough to accommodate the other, although she deftly switches to a Harper’s Bazaar mag once she’s sees Jeff’s asleep.

‘Rear Window’ is such a delicately balanced and nuanced world it’s a tribute to Hitchcock’s ability that he was able to so deftly hold all the elements in harmony, with not a false note detectable. The ‘grace’ notes of resolving the sub-drama’s of ‘Torso’ and ‘Composer-Lonelyheart’ wordlessly and beautifully without ever diverting our gaze from the main game is breathtaking, so subtle we barely know Hitch has pulled these marvelous conjuring tricks along the way. The use of music is also a small deconstructionist miracle, no wonder the Nouvelle Vague lionised the innovative old man, as there is no score to speak of, the music is ‘found’ and we hear the sounds of the courtyard as music spills from rooms and the composer’s piano. Again Hitch gets in a little humour as Lisa is echoed in the song ‘Mona Lisa’ (a cold and lonely, lovely work of art’) and it’s the journey Kelly’s character is on to become ‘real’ through action, to break out of the ‘frame’ her beauty has found itself frozen in, to become a woman and not an idea. The idea of sex behind the curtains permeates the entire proceedings, and Stewart (and us) gets to view married life in all it’s stages, from the randy newlyweds who go at it for days, to the comfy old couple who sleep on the balcony to the couple at the end of their tether, the Thorwald’s. Each character is an island unto themselves, and in the only social commentary in the piece, once the older couples dog is killed the wife shouts her cri-de-couer from the balcony as everyone is drawn by the commotion, it’s a moment that shames Jeff’s activities and a plea for community, to end the isolation and be ‘neighbours’ who know and care for each other. It’s another subtle way of telling Jeff to end his ‘isolation’ with Lisa too. Hitchcock brilliantly shows Thorwald’s outsider status at that moment by having his shades being the only one’s closed, a lit cigarette glow the indication that he’s still there.

The relationship between viewer and viewed is of course at the core of the film. Hitchcock effortlessly puts the viewer in a place he’s occupied all his adult life, looking at love. lust, hate and evil through the prism of a viewfinder, tacitly acknowledging the urge to ‘perve’ exists within us all, the high the low and the in-between. Fuse that urge with a fascination for murder, Hitch’s stock in trade, and the results were almost assured. The script is sharp, the set design magnificent, a triumph of Hollywood ingenuity allowing Hitchcock to place his camera in the right place every time. Jimmy Stewart fulfils the role of ‘everyman’ perfectly for this morality fable and the casting is just right, too macho and it wouldn’t have worked, and he’s just self-centred enough for us to believe he could be second guessing a dish like Kelly. Hitchcock found the apex of his uber-blonde ideal in the stunning Grace Kelly, and she was more than up to the part of Madison Ave princess cum action woman , her cool detachment with a hint of eroticism under the surface the perfect balance. Hitchcock was coming off a run of failures, with the odd success d’estime, but ‘Rear Window’ marked the start of an unrivaled run of classic productions that would see the master at the top of his game for years to come. 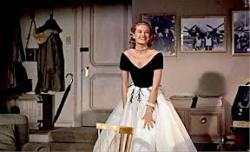 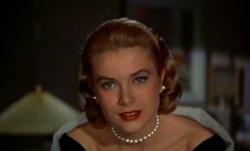 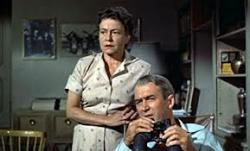