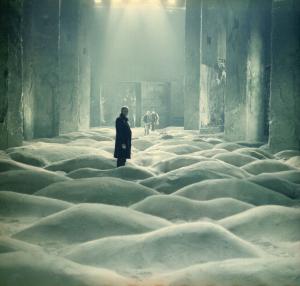 'An artist never works under ideal conditions. If they existed, his work wouldn't exist, for the artist doesn't live in a vacuum. Some sort of pressure must exist. The artist exists because the world is not perfect. Art would be useless if the world were perfect, as man wouldn't look for harmony but would simply live in it. Art is born out of an ill-designed world.' ~ Andrei Tarkovsky

Tarkovsky's meditation on humankind's existential dilemma is at the centre of Stalker, asking the question 'What is the place of the metaphysical in a physical universe'? Tarkovsky uses the device of viewing the question through the eyes of three 'pilgrims', a Stalker (Alexander Kaidenovsky), a Professor (Nikolai Grinko) and a Writer (Anatoly Solonitsyn). The Writer despairs of the modern world, a world so dull and uninteresting compared to the middle ages, when spirits and magic dwelt with common people. He wants to go to the mysterious Zone to spark some inspiration, to be able to write something people will still be reading in a hundred years, he wants a kind of immortality. His guide to the Zone is a Stalker, trained in the mysterious and dangerous arts of navigating safely through the Zone to get to the Room. The Room is the innermost part of the Zone and once there it's alleged the traveller will receive what their true heart desires. The third member is a man of science, who seems to want to measure the mysteries of the Zone, as if they could be marked off and quantified.

The look of the film is truly startling, The set design and camerawork make a kind of dreamworld out of the mundane. The major set was a disused power station and it's turned into a foreboding and alien terrain, both familiar and unfamiliar. As with his Sci-fi masterpiece Solaris Tarkovsky has fashioned a visual world that is unique and serves his vision perfectly, and on the Hollywood budget equivalent of the smell of an oily rag.

The structure of the fable can easily be unravelled on one level if we see the Stalker as a priest/spirit guide, leading his devotees through the mystical terrain of the realm of the invisible. The Zone substitutes as religion or spirituality, that esoteric kingdom over which the clerical classes have historically claimed domain. The Stalker has been trained in the Priestly arts by Porcupine, a Stalker who lost his brother to the dangers of the Zone. The Stalkers methods seem magical, hurling his nuts and white bandages to mark the path. The Writer and Professor duly take the leap of faith and follow his marked out path. If the Zone is the spirit realm then the Room is heaven/nirvana, or the ultimate destination for the attainment of paradise.

Once the Room is found, it becomes apparent that both Writer and Professor represent threats to the nostrum Stalker subscribes to. Writer wants immortality, and Stalker is unable to  point to an instance where anyone taken to the room has actually been granted happiness, or the ability to live as themselves, to have that freedom. Professor wants nothing less than to blow up the Room with a bomb, reasoning that once everyone knows about it they'll overrun the Zone and civilisation will be out of control, for him better no possibility of heaven. Stalker argues that they will destroy hope, and that even if the Room is a lie, false hope is better than no hope.

The film supplies some overlay of psychological angst, an air of oppression, by using the Zone as a metaphor for the unknown. For someone making films in communist Russia the overtones are obvious. Visually Tarkovsky uses 'magic' to distract and subvert, as does religion. The sleight of hand is a kind of philosophical red herring. What gives Stalkers strange daughter the power of telekinesis is one such instance, or his wife alluding to the fact Stalker is an alien?  I don't think either matters, or that it's important as Tarkovsky has built his fable on the big questions of existence and faith, and these confections are just brief and mysterious sideshows.

Tarkovsky has created a mythic Homeric journey of discovery for his pilgrims. What do they find in the Zone? Themselves of course, but Tarkovsky is saying they were always there, only the scenery changes, not the internal dynamic of the heart and soul. Find what it is you value, and hold on to it, in the face of everything else, it may be all you have. There is no map for the terrain of the heart and soul, find your own meaning. No wonder Jean Paul Sartre was a fan of Tarkovsky.

Russian mysticism runs deep, and Tarkovsky was tapping into this vein of superstitious sensibility as much as anything else, it's no accident that his favourite filmmaker was Ingmar Bergman. 70 years of secular Communism couldn't dull the influence of centuries of Christian mythology, and after the structures of the state collapsed in the 1990s the Orthodox church re-emerged as if it had merely been sleeping. Centuries of peasant dominated culture and ignorance was the fertile ground for the church to exploit, and Tarkovsky investigated blind belief in its many forms in a lot of his art. Stalker asks the bigger and more difficult existential questions, and let's the surreal ambience and ambiguity speak for itself. 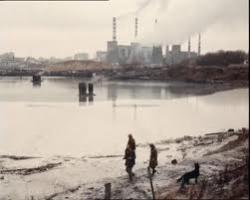 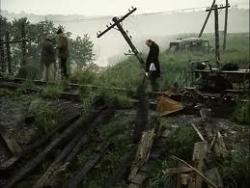 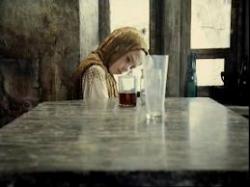 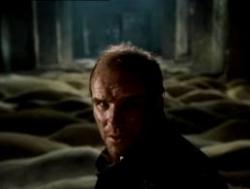 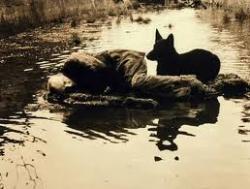