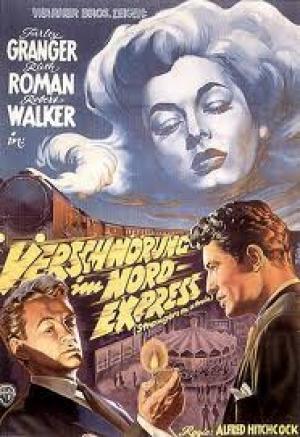 Strangers On A Train

Hitchcock’s ‘Strangers On A Train’ is a classic example of a pithy hook of a title providing audiences with an easy connective motif, ensnaring them in the action and indelibly burning the central idea of the ‘murder-swap’ into our cinematic consciousness at the same time. Hitchcock also knew he would need more than that to flesh out a catchy premise and was keen to have a hit after leaving Selznick for Warner Bros some 3 years earlier and only having rewarded the studio’s faith in him with box office flops since in ‘I Confess’ and ‘Stage Fright’, two of his least memorable films, so he spent considerable time on the adaptation himself with help from heavyweight writers Raymond Chandler and Ben Hecht. ‘Rope, his first film for Warner’s in 1948 was at least a critical hit but also fared poorly at the box-office, so he had a lot riding on this train. Hitchcock made something of a casting coup with the ill-fated Robert Walker in the pivotal role of Bruno Anthony as Walker had only recently emerged from a psychiatric ward. after breaking down due to alcohol and drug problems stemming from his bitter break-up from wife Jennifer Jones. Jones began an affair with Hitch’s old boss, David O. Selznick while shooting ‘Since You Went Away’ in 1944, and Walker had been on a downward spiral since their divorce in 1945. The experience of a mental breakdown obviously added a realism to Walker’s portrayal of the unhinged Bruno.

Hitchcock opens with a fabulous touch of his visual wit, two men shown only via two different sets of shoes are both marching to catch a train, we don’t see who they’re attached too until they accidentally brush up against each other in the confines of a train carriage. Bruno Anthony (Robert Walker) recognises the person he’s just bumped up against as famous amateur tennis star Guy Haines (Farley Granger). Guy is polite enough but soon senses Bruno is a pest when he starts to bring up Guy’s personal life, his affair with a Washington socialite making him a scandal sheet regular as he’s still married to another woman. Guy tries unsuccessfully to put Bruno off but ends up having a meal with him in his compartment where he outlines his mad scheme to ‘swap’ murders. Bruno understands that in the eyes of the law motive is everything and if two perfect strangers agree to do each other’s dirty work then the lack of connection means two perfect murders will result. Guy has long since resorted to simply nodding yes and humouring Bruno and laughingly agrees it’s a great idea. Guy leaves his lighter in Bruno’s compartment and unwittingly establishes a link between the two men. Guy attempts to ask his wife Miriam (Laura Elliot) for a divorce, but she refuses him, leaving his love Anne (Ruth Roman) distraught, at which point Guy says ’I’d like to break her neck’.

Bruno assumes the agreement is in place, and he dutifully follows Miriam to an amusement park as she’s escorted by two of her boyfriends. Miriam notices Bruno following her and her sexual desire is piqued enough to have her lose her companions and let Bruno get close to her alone on a remote island they’ve rowed across to. Hitchcock shows the murder reflected only in the glasses that Miriam wore, knocked onto the grass by Bruno’s violence as her strangles her. Hitch succeeds in contrasting the harmless fun of the carnival with a gruesome act, even having Bruno burst a boy’s balloon with malice on the way to doing the deed. Bruno waits for Guy’s reciprocal murder, and when it doesn’t eventuate he contacts Guy to see what the problem is. Guy is appalled and tells Bruno he’s insane, but Bruno convinces Guy that he’d be an accessory now and there’s no way out but to go through with the pact. Guy resists, Bruno persists. Anne and her Washington politician father (Leo G.Carroll) are dragged into the drama, as is Anne’s younger sister Barbara (Pat Hitchcock) and soon Bruno is inveigling his way into the family’s attention, much to Guy’s disgust. Guy’s alibi is weak and the police appear ineffective so Guy must clean up his own mess in true Hitchcock ‘wrong man’ fashion. Bruno soon disgraces himself at a society party by getting carried away in a demonstration of a ‘murder’ with some titillated high society types, and continues to throttle one of the women until she passes out, triggered as he was by Barbara’s glasses and facial resemblance to Miriam. Guy attempts to have Bruno’s father get medical treatment for his ‘lunatic’ son, but Bruno remains one step ahead. Bruno decides, as Guy won’t do his murder, he’ll pin Miriam’s murder on Guy by leaving his engraved lighter at the amusement park scene of the crime. Guy is involved with a tennis match that delays his ability to stop Bruno, as he’d correctly guessed what his plan would be, Bruno is also delayed, and Guy finally confronts Bruno on an amusement ride that crashes out of control, leaving Bruno dead and Guy free at last.

Hitch takes as his start point Bruno’s declaration to the breathless socialites ‘Everyone is interested in murder’ and darkly underscores the mundane acceptance of the idea even in the ‘highest’ places. Bruno has just asked a judge how he could eat dinner after condemning a man to death, pointing up the issue of state sanctioned murder as against a private act. Bruno is a compulsive thrill-seeker, clever but without empathy for another living soul, enabling him to reduce murder to a utilitarian concept. Unable to find meaning in his rich hollow world, Bruno envies people who ‘do things’ like Guy has done with his tennis success, and resolves that he must ‘do things’ too. The subtext is Bruno’s desire to impress Guy that he is a ‘doer’ just like him, so that his sexual love for Guy might eventually be consummated. Hitchcock has Walker play the part like a jilted schoolgirl at times, and the frisson Bruno feels when he’s close to Guy is unmistakable. Farley Granger, himself no stranger to affairs with men, brings just the right emotional pitch to his portrayal of Guy Haines, a good looking young man of advantage, essentially harmless but inherently decent, and yet again a Hitchcock character caught in a vortex of intrigue.

The film was a smash hit mainly because it displayed all the master’s touches and finesse, it’s expressionistic visual roots plainly seen, revealing the German influence of Hitchcock’s early career. Brilliantly shot by Robert Burks in a decidedly Noir-ish fashion, it could neatly fit that genre but for the fact Hitchcock is probably a genre unto himself. Several brilliant and witty visual choices contributed to underscoring the action, none better than Bruno the misfit, poker-faced and still, amongst the tick-tock of the turning heads crowd watching Guy play tennis. Priceless.

‘Strangers on a Train’ reignited Hitch’s American career and paved the way to the even greater heights of ‘Vertigo’, ‘North By Northwest’ and the surreal-noir ‘Psycho’.  Sadly the success of the film was also helped in part by the massive publicity surrounding the untimely death of Robert Walker prior to release from a medication overdose. Granger was distraught, the two having formed a great friendship on the set of the film, but ‘Strangers On A Train’ will remain forever as a testament to their abilities and to the unique talent of the master of suspense. 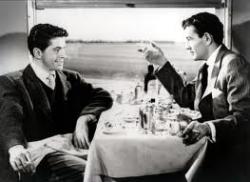 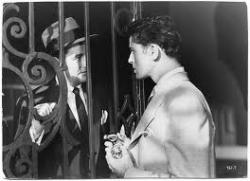 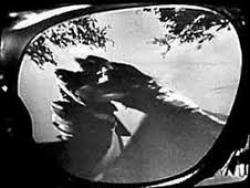 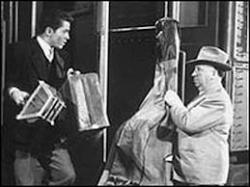 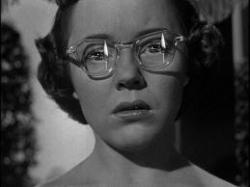 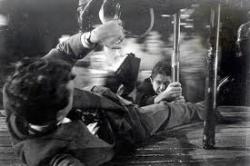 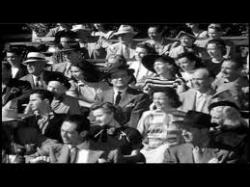