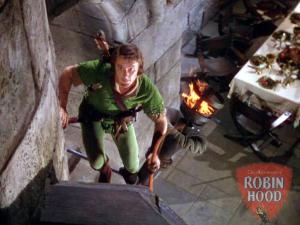 The Adventures of Robin Hood

Warner Brothers magnificent technicolour production of the Robin Hood myth is the definitive adventure romance from Hollywood's golden age. A product of a sharply efficient production line ethos, rather than an auteur's vision, the film benefits from William Keighley's muscular and thrilling outdoor staging as much as it does from the Michael Curtiz helmed interiors. The two approaches meld seamlessly, anchored by performances that are so sure-footed they remain the definitive portraits of any committed to celluloid. Despite the many subsequent attempts to deliver the Robin Hood myth to new generations it's impossible to imagine anyone other than Errol Flynn ( my fellow Tasmanian) as the Sherwood bandit, or Olivia De Havilland as the luminous Maid Marian.

In the 12th Century in England good King Richard has been captured in Europe while returning from the Crusades and his evil brother John (Claude Rains) has siezed power for himself, gouging the Saxon population for every cent he can. Supporting John is his tyranny is Sir Guy of Gisbourne (Basil Rathbone) , a Norman noble who helps keep the divide between the two ethnic groups an ongoing issue. Robin Hood (Errol Flynn) sees the injustice in the land and makes a stand against John's brutality and taxes. Robin crashes a banquet being held for John by Gisborne, delivering a poached deer directly to his table. Flynn's playing of the scene is a delight and the twinkle in his eye immediately endears him to the viewer. John admires the impudent outlaw who has been firing the imagination of the country, and invites him to dine, before attempting to capture him, and Claude Rains' oily playing of John matches Flynn's effectiveness. Robin delivers a rousing speech stating his intentions, effectively nailing his protesting petition to John's church door, and keeping one eye on the stunning young woman sitting next to John while doing so. Robin breaks out of the banquet hall, and puts out the word for followers to join him, and soon many men are gathered in Sherwood Forest and swearing allegiance to Robin and his cause.

Robin's men ambush a money convoy and headed by Gisborne, pompous and inflated as he is, with Maid Marian and The Sheriff of Nottingham, they are captured and taken to Sherwood as Robin holds a celebratory feast. Robin and Marian dance around one another until Robin takes the opportunity to show Marian the victims of John's oppression, forcing Marian to reconsider her opinion of the outlaw. John and the now released Gisborne set a trap for Robin he can't resist, an archery contest, reckoning the winner will be none other than Robin. Robin's cockiness is part of his charm and unable to resist the prize of a golden arrow being presented by Marian herself he enters and duly wins. Robin is captured and thrown into prison, but Marian betrays her Norman blood and helps Robin's men set up a last minute rescue from the gallows. Robin goes to Marian to make his thanks, the two realising they are desperately in love with one another. King Richard (Ian Hunter) has escaped and returned to England incognito, but upon being recognised John is alerted and sends out an assassin. Marian has overheard the plot and sends a warning, but is captured and put in prison for her troubles by John. Richard reveals himself to Robin and the two join forces to confront John, Robin fights a climactic sword duel with Gisborne during the battle, and frees Marian.

The outlaw-as-hero archetype is a strong one, and every culture has tapped it's deep mythological roots, America with Jesse James, Australia with Ned Kelly and the daddy of them all is Robin Hood. It was ever thus, one man's freedom fighter is another man's terrorist? Robin crucially doesn't hate Norman's, he 'hates injustice', and would be happy to share the bounty of the land with his Norman rivals. Robin's definite socialistic solution must have seemed remote enough from a 1930's audience, weary from years of the Great Depression and eager for escapist fare, for it to pass with little controversy. Soon enough America would be seeing reds under the bed, but the allegorical content of this piece slipped under the radar. It would be another '30 years before the times caught up with the swaggering Flynn type anti-hero, the 'sticking it to the man' films that were the filmic fodder of the counter culture featuring a more modern variant on Robin in Cool Hand Luke, or the Nicholson persona of Bad Ass in The Last Detail or McMurphy in Cuckoo's Nest.

The film sparkles at every level, witty script, set design, costumes and musical score are all top shelf, but the targets are hit dead centre with the cast and performances, drawing upon Warner's long list of capable talent. The music is stunning, provided by former child prodigy and student of Mahler, Erich Wolfgang Korngold, who always claimed that this film saved his life as Curtiz had convinced Warners to extract the Jewish Korngold and his family from Austria after the Nazi's took it over. Basil Rathbone and Claude Rains are wonderful as the villains, Rains suitably loathsome as the rather effete John, and Rathbone intense and hard as the driven Gisborne. De Havilland was never lovelier than as Marian, and her costumes are truly inspired, creating a vision of elegance and beauty hard to match. In Errol Flynn however the studio found the right hero, incredibly after Jimmy Cagney had been announced as the star, Flynn was the second choice and only got the part after Cagney has another of his frequent clashes with Jack Warner and pulled out. Flynn continued in his swash-buckling ways, having made Captain Blood as his Hollywood debut, as well as The Charge of the Light Brigade both with Michael Curtiz.

Flynn was something of a larrikin Tasmanian devil who found his way to Hollywood via many a boy's own adventure that beggared belief, but his screen presence was spectacular, the camera loved him. In Robin Hood Flynn found a persona that suited his own irascible nature and redolent charisma and he succeeded beautifully in bringing the mythic outlaw to life. Flynn may never have believed himself a great actor but he was never less than watch-able, and in the words of estimable critic Robert Regan, summing up Flynn's enduring appeal, 'He was an extremely sincere actor. Until his last sad years, there was never a trace of tongue-in-cheek in his performances'. Couldn't have said it better. 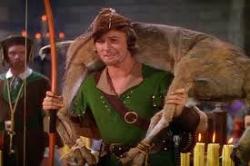 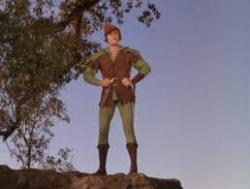 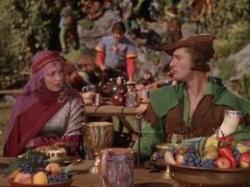 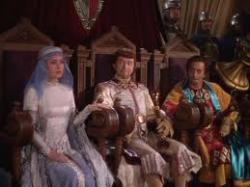 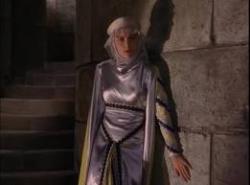 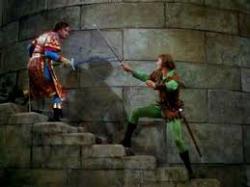