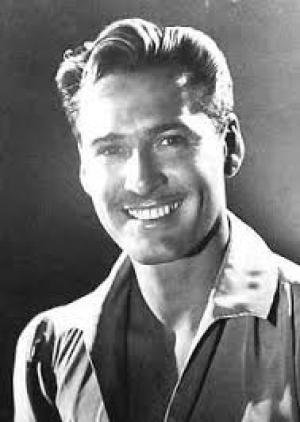 "The public has always expected me to be a playboy, and a decent chap never lets his public down."
~ Errol Flynn

Errol Flynn was born in Hobart, Tasmania in 1909 and became a bone-fide movie star in Hollywood’s Golden Age, lionised for his swashbuckling on-screen persona to an audience scandalised by his controversial off-screen behaviour. Flynn’s reputation as a womaniser started early, in several high schools in his native Tasmania (his father was a lecturer at The University of Tasmania), and continued during his further schooling in London and Sydney, and through his escapades in the waters off Northern Australia as a young sailor and adventurer. His sea faring connections led to a part as Fletcher Christian in Charles Chauvel’s, In The Wake of The Bounty, an odd rendering of the story of the famous mutiny and its aftermath, but it was enough for Flynn to follow his acting bug to London to work and train in theatre for a time. Errol set out for Hollywood in the early '30s, meeting actress Lily Damita on the boat across from England, they married once they got to LA and Flynn made the most of the actresses contacts (including her ex-husband Michael Curtiz), landing a contract with Warner Brothers.

Flynn’s natural athleticism and roguish demeanour made him a box-office hit from day one, when Warner’s opted to take a chance of the unknown actor in Michael Curtiz’s Captain Blood, having failed to secure first-choice Robert Donat. Errol made the best of the opportunity and the film’s success led to several more Curtiz/Flynn collaborations, including his next film, The Charge of The Light Brigade. Warner Brothers realised they had a movie star on their hands, a cash cow that they assiduously milked for as long as they could. Flynn was typecast as an action man from the start, ironic given his physical condition was never A-one due to the tropical diseases he’d contracted in the New Guinea waters, together with a case of TB – enough to have him fail a medical for military service in WWII.

Curtiz and Flynn had a fractious but profitable association in the 12 features they made together, and Warner’s often threw Olivia de Havilland into the mix, having her co-star with Flynn in 8 features and in the sketch-feature Thank Your Lucky Stars. De Havilland confessed years later that she and Flynn were in love but never consummated the relationship, but she told a delicious story of filming a kissing scene in front of Flynn’s wife, Lily Damita, during the filming of possibly their finest collaboration, The Adventures of Robin Hood,  -  "And so we had one kissing scene, which I looked forward to with great delight. I remember I blew every take, at least six in a row, maybe seven, maybe eight, and we had to kiss all over again. And Errol Flynn got really rather uncomfortable, and he had, if I may say so, a little trouble with his tights.”

Curtiz found a couple of great roles for Flynn in a western, Dodge City and against the formidable Bette Davis in The Private Lives of Elizabeth and Essex. A highlight of the era was the brilliant WWI film, The Dawn Patrol, directed by maverick Edmund Goulding and co-starring Flynn’s lifelong friend David Niven. Niven’s writing in his novels on the shenanigans of the time spent in Flynn’s company is essential for any fan of the period. After a run of contemporary roles in dramas and ill-considered screwball comedies, Curtiz gave him more suitable roles in Virginia City, another western, and in The Sea Hawk, a rollicking adventure. Santa Fe Trail was another Curtiz western and by the time they made Dive Bomber they detested each other, and Errol was soon looking for someone else to tailor his career. The period was complicated by the fact Flynn was ineligible for military service at a time when actors were signing on to enlist and many of his English friends had returned to Britain to fight the Nazis in real life.

Flynn finally found a director who could utilise his persona and talents as well as Curtiz, in the grizzled, silent era veteran Raoul Walsh, and he asked Warner’s specifically to replace Curtiz on They Died with Their Boots On, with Walsh. The one-eyed director was a no-nonsense operator who was more about utility than art, but he knew the value of a good story matching a good cast and attaching a team of professionals to bring in the job. After the success of Boots, the first of their 7 films together, the pair enjoyed a mostly smooth partnership, one anchored by mutual respect and shared philosophies. Unlike the straight ahead Curtiz, whose European humour couldn’t translate to Flynn, Walsh was a former hell-raiser and man’s man himself and he understood that side of Flynn’s personality, and what’s more, he let him have fun with it in his characterisations.

Walsh and Flynn made Desperate Journey next, a 1942 war film where Flynn plays an Australian fighting his way out of Germany. Their next collaboration was the period action film, Gentleman Jim, the highly fictionalised version of the life of turn of the century boxed Jim Corbett. The film was a huge hit and a personal favourite of Flynn’s, but still its success indicated the public only wanted him in action/adventure roles. The physical nature of the film and the exertions it put upon the deceptively unwell actor (most of the damage being self-inflicted) actually caused Flynn to have a minor heart attack. Flynn followed up with solid performance in Edge of Darkness, a film for Lewis Milestone, another war picture with a script from Robert Rossen.

"It isn't what they say about you. It's what they whisper." ~ Errol Flynn

Flynn’s personal life overtook any other considerations at this point as he stood trial for statutory rape in 1942. Flynn thought his career would be in tatters due to the bad publicity but Warner’s stuck with him, intuitively realising the public vicariously enjoyed Flynn’s drinking and womanising ways, and they mostly supported the actor in his assertion that he was innocent. The defence successfully pushed the line that the two women accusing him in separate incidents a year apart, had conspired to create the case. The jury acquitted the worried actor and the phrase ‘in like Flynn’ entered the public lexicon.

Walsh put the now even more notorious star to work in Northern Pursuit, and this time Flynn was a Canadian beating the Nazis. His health was now in decline and he was being treated for tuberculosis amongst other ailments, but Warner’s knew they still had a cash cow and kept him on the milking machine, albeit under a new contract that incorporated Flynn’s own production company, Thomson Productions. The first under this contract was Uncertain Glory, a Walsh helmed war pic, of course, with Flynn a Frenchman fighting Nazis. The pair next took a controversial tilt at the war in the Pacific in the excellent Objective, Burma - but unfortunately Hollywood’s penchant for playing fast and loose with actual history saw the Brits get their nose out of joint. It was a great movie, but poor history, and poor Errol copped the brunt of the criticism, especially since he hadn’t actually served in the military.

Alexis Smith starred alongside him, in one of the four films they made together, in the patchy western San Antonio, directed by David Butler but helped out by an uncredited Walsh. A rare comedy opposite Eleanor Parker did well, before Flynn starred opposite Barbara Stanwyck in his only Film Noir, Cry Wolf, a film that has aged particularly well and showcases a convincing, edgier side to Flynn’s abilities. The same director, Peter Godfrey, worked with Flynn again on his next project, the undistinguished melodrama Escape Me Never, once again opposite Eleanor Parker. Flynn and Walsh re-teamed for Silver River, an odd western with psychological dimensions and noir-ish pretensions, but the film was problematic given Flynn’s drinking habits. Warner’s put him to work on Montana, another Western with Alexis Smith, and again Raoul Walsh did some patch work, but the happy working relationship was now soured, mostly over Flynn’s rampant alcoholism, and the pair would never work together again.

The last decade of Flynn’s life produced a very mixed bag film wise. Flynn never worked for A-List directors again, except for part of the Universal film Against All Flags, where Douglas Sirk filled in for a couple of days work, and two Fox films late in the decade. Perhaps Daryl F. Zanuck had a soft spot for the ageing lothario, but Flynn acquitted himself well in both The Sun Also Rises, the Henry King adaptation of Hemingway that starred Tyrone Power and Ava Gardner, and The Roots of Heaven, for John Huston. He made a tribute film to John Barrymore, an old drinking buddy of Flynn’s and died with a new 16 yr. old girlfriend at his side and dreams of adventures in rebel held Cuba.

Errol Flynn was a product of the Golden Age of Hollywood in every sense, a remarkably photogenic human with a disarming roguish charm. Flynn was no fool - he had a keen, animal intelligence and he had an ease and elan in his work, the by-product of someone who couldn’t take himself or his work too seriously. He knew lady luck had smiled upon him and he rode that wave of fortune to the predictable premature end. In a personal aside I take some small pride in his achievements, being that we were both born in the southern Tasmanian town of Hobart, a sweet hamlet at the edge of the world and not a bad place to start a life.