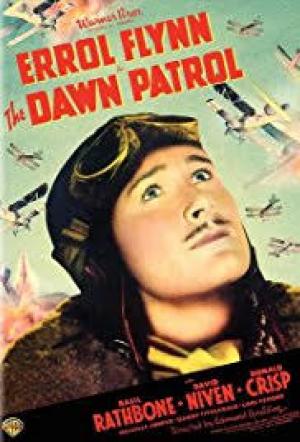 "Man's indecency to man all over the world rules out the idea of humanity as an actuality. It is a dream of young idealists. In practice a misnomer."
~ Errol Flynn

Warner Brothers were looking for star vehicles for Errol Flynn, their hottest box-office property for a number of years in the 1930’s and 40’s and shamelessly plundered a property they owned, the Howard Hawks version of Dawn Patrol from 1930. The studio also wanted a war movie to capitalise on the impending war in Europe, as Germany had recently annexed Austria and most pundits viewed a second major conflict as a certainty. They set mercurial director Edmund Goulding to work and cast a brilliant ensemble of wonderful British actors to support the Tasmanian born Flynn, including his good friend David Niven and Flynn’s erstwhile screen nemesis Basil Rathbone, the pair having recently made the superb, The Adventures of Robin Hood. Flynn delivered one of his best performances as the devil-may-care flyer who has great responsibility thrust upon him and the story finds a nice balance between the struggle of the men and the weight of command.

Courtney (Errol Flynn) and Scott (David Niven) are two brash Royal Flying Corps pilots in France in 1915. They fight hard and party hard, knowing that the chances of surviving the war for men in their roles is slim. Every day their commander, Brand (Basil Rathbone), orders men on missions and counts the losses as the survivors struggle back to base. Courtney and Scott help induct the endless supply of inexperienced replacements into the barracks life, knowing that many of the boys will only survive a matter of days. The famed German ace, Baron Von Richtofen enters the conflict and raises the already high stakes for the group of Flyers. Courtney and Scott make an unauthorised raid on the Baron’s airfield and the unexpected result is a promotion for the shot-nerved Brand, leaving Courtney in charge of the airfield. Courtney finds out about the burden of responsibility the Commander has, just as Scott’s young brother arrives as one of the green and wide-eyed replacements.

Edmund Goulding was an odd character who had enjoyed his greatest success with the glittering multi-star MGM hit Grand Hotel a few years earlier. He was an ex-pat Brit, a writer, composer, actor and rampant bi-sexual whose sex parties were legendary apparently. This side of his character made him a less that sure bet for longevity in any career, and MGM let him go after one scandal too many. He seemed to bounce between the majors on a regular basis since directing his first silent film in 1923 and would work at Fox after his Warners stint ended. Possibly because of his own acting experiences, he was at his best when dealing with actors and got career best performances from many of his leading players including Gloria Swanson, Greta Garbo, John Gilbert and Norma Shearer, and Flynn was never better than in this film. Goulding, like George Cukor, had a reputation as a ‘woman’s director’, and if so then Dawn Patrol suffers not one jot as all the characterisations on show are top shelf, and Goulding never gets in the way of the actors in delineating their characters and internal conflicts. In fact, for a director who came up in the silent era the cutting and pace is very modern, the match of maestro Howard Hawks in that regard. Of course, Goulding was taking his lead from the first Hawks film, taking large slices of the action footage verbatim, but beefing up the dialogue to suit the theatre trained Brits.

After sound films arrived a decade earlier in Los Angeles there was an influx of actors who could talk, especially Brits, and Hollywood experienced the first ‘British Invasion’, 30 years before the Beat Groups. Donald Crisp, Barry Fitzgerald and Melville Cooper round out a wonderful array of English trained talent (Flynn’s only acting training was touring in English Rep) and Goulding’s decision to expand the dialogue makes the drama and the moral predicament even more effective. The camaraderie on the set was exceptional, and Niven spoke highly of Goulding’s direction and ability to work with his actors. Goulding was something of a visionary too, saying of the coming of sound in 1929, “The infant industry has taken the ribbons from her hair. She has put away some of her bright toys, she is growing up. She may have a child one day, and the child’s name may be Television, but that’s another story.”

John Monk Saunders wrote the short story on which this film is based, as he also had for the first Best Picture Oscar winner, William A. Wellman’s Wings. The post war period in the late 1920’s was a time when artists were digesting the lessons of the great conflict and films like All Quiet on The Western Front and Wooden Crosses were exploring the legacy of the pain and loss. While the vastness of the slaughter in the trenches boggled the mind in the 1914-1918 war, here we have a microcosm where the percentage of loss is equally as brutal, but the perspective allows an intimate and personal dimension to unfold. Rather than a polemic on ‘war is bad’, the script asserts that the best of humanity can occur even in the darkest of hours or against the toughest adversity. Jean Renoir’s magnificent anti-war film La Grande Illusion from just the year before may have been an influence as it showed the camaraderie of the flyers and included scenes of battlefield adversaries treating each other with respect. Both Renoir and Hawks had experience as aviators in WWI, Renoir in active duty and Hawks as a flight instructor in Texas, so a love of flying infused their respective pictures in a time when air travel was a fascination and barnstorming stunt flyers all the rage.

The Dawn Patrol was conceived as a deliberate star vehicle for Errol Flynn, and it didn’t disappoint, it showcased every aspect of his audience appeal. He was incredibly photogenic, the camera loved him as did a legion of women, and men wanted to be him. In this film he is kind, dutiful and decisive, tough and tender, a rogue you can rely upon and not many actors could have squared that circle. Flynn landed somewhere between the smirking gruffness of a Clark Gable and the warm-hearted sweetness of a Robert Donat, but always wholly himself. Flynn on screen was devoid of guile and artifice, a natural with a limited range but definitive and authoritative in roles that allowed him to be his personable self.

Edmund Goulding’s The Dawn Patrol is A-grade classic Hollywood, an example of what could be produced when all the might of the studio system was focused on the right project for the right star. Goulding brought home the bacon for Warner Brothers and was rewarded with a succession of excellent Bette Davis vehicles before going across to Fox and Tyrone Power. The Dawn Patrol was embraced by audiences as an unsentimental, hard bitten fiction that harked back to ‘the war to end all wars’, but sadly the world was about to embark on a similar madness in 1939, and another generation of young flyers would be sacrificed on foreign fields. 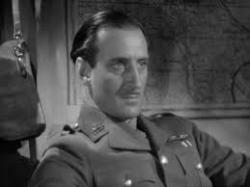 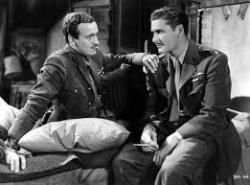 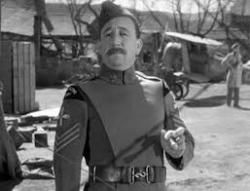 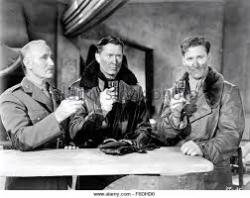 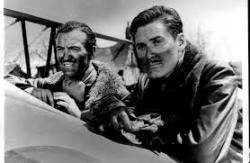 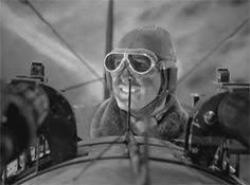 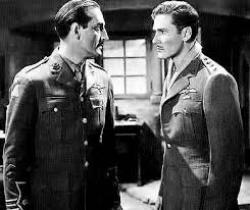