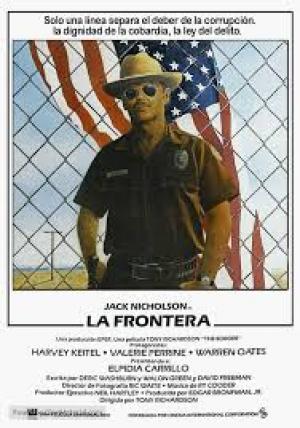 Out in the West Texas town of El Paso...

"I have always gone on to new places and undertakings, each different from those already familiar to me (‘oh where is that sense of unifying style?’ the critics would say) Each time I’ve pushed off it has not been from the necessity or wish to get away but because the newer world holds the promise of a positive and glowing thing which I wanted to experience or create" ~ Tony Richardson

Tony Richardson came to prominence as a filmmaker by chronicling the social issues facing post war Britain, first as part of the Free Cinema documentarian group and later as part of the British New Wave. In the 1970’s he became an ‘international’ director and in the early 1980’s he found himself at the helm of an American social issues film, The Border, a downbeat look at life on the dividing line between Mexico and the USA, out in the West Texas town of El Paso. Jack Nicholson, a huge star then in transition from offbeat leading man to offbeat character actor took the lead, teamed up with Harvey Kietel no less, and Ry Cooder provided the warm and stylish soundtrack in a robust and earthy film that found no love upon its release.

Charlie Smith (Jack Nicholson) is a discontented immigration cop in LA, regretting his move out of a Parks and Wildlife job, when his wife Marcy (Valerie Perrine) arranges for them to take an adjoining condominium next to her old cheerleading friend Savannah (Shannon Wilcox) in El Paso. The couple move to Texas and Savannah’s husband Cat (Harvey Keitel) arranges a job for Charlie where he works, on the Border Patrol. Cat soon drags Charlie into the corrupt and violent world of doing business with the human traffickers on both sides of the line. Charlie’s world collides with Maria’s (Elpidia Carrillo) a young Mexican mother who is attempting to balance a precarious situation with her child and younger brother and her attempts to get them all across to the US to start a new life.

Charlie is a working stiff facing an existential crisis, caught between an unfulfilling job and an indolent wife. His work is a farce that involves him rounding up and deporting illegal Mexican workers in collusion with the employers who help him select his marks, and he regrets leaving his outdoor job for the city grind. Marcy is affectionate but unrealistic and lazy, living a child’s existence on the income Charlie makes, which never quite covers her outgoings. After being dragged to El Paso Charlie is confronted with an even more brutal system that exploits the Mexican workers and enriches both people smugglers and corrupt Border Patrol officers. Charlie realises there are different kinds of borders, and he has to draw one in the sand for his corrupt partner Cat, after he’d reluctantly agreed to go along with a scheme to make the kind of money he needed to fund Marcy’s new lifestyle.

Richardson makes the most of the earthy Mexican village locations in filling the screen with an authentic slice of life on the poor side of the river, and deftly contrasts that with the vacuous consumer culture on show on the richer side. The simplicity of life in the village, with all the attendant pitfalls of life in poverty, is presented in a matter-of-fact way, the poor are neither sainted nor demonised with some showing grace and decency and others succumbing to the nastier impulses of aiding in the exploitation of their countrymen, both as illegal immigrants or as sex workers. In Richardson’s world, as in Jean Renoir’s, everyone has their reasons and both sides of the divide are trying to eke out a living based upon their own moral codes. Charlie’s moral code kicks into clear focus once he considers Cat to have crossed a line, but his exposure to the simple humanity of Maria is key in awakening in himself a reconnection to his own sense of decency.

The immigration issues that were facing America in 1982 are not dissimilar to the issues still facing the country under Donald Trump, still a complicated stew of identity, fear and race. On a purely economic level the argument against immigration makes no sense, as huge slabs of American business rely on cheap, undocumented migrants hopping the fence and doing the lowly paid work that many American citizens just won’t do. When the argument gets emotional it gets ugly. Fascists like Donald Trump play dog-whistle politics in exploiting the fears of some American citizens who, either through ignorance or xenophobia, are easy prey for the propagandists. The greatest con job ever perpetrated by Trump’s moneyed class was to convince the middle and working classes that poor immigrants were a threat to their lifestyle, rather than questioning a system that returns most of the wealth to the already mega wealthy. The Border does not play up the politics of experiences on the front line of the debate, it merely lays out some very human stories and affirms the right for every individual to pursue a life of dignity and happiness.

Tony Richardson’s uneven career had led him down several paths by the time he’d got to The Border, but his clear-eyed outsider status afforded him a chance to render the piece without any overt sentimentality in relation to depicting the poor Mexicans, or America bashing in depicting the suburban, working stiffs who policed the borderline. Richardson was aided by a uniformly excellent supporting cast, especially by Harvey Keitel as the hard-edged grafter willing to do what it takes to make a buck, and Valerie Perrine and Shannon Wilcox as the blissfully self-absorbed wives. The beating heart of the film is the lovely performance by Elpidia Carrillo as Maria, devoid of artifice or guile, it gives the right emotional tone for Nicholson to react to and build a case for Charlie’s redemption. Any film with Warren Oates in the cast is also a huge plus.

Tony Richardson brought a tender vein of humanism to the project and unpacked the issues without delivering a polemic on the rights or wrongs of the immigration question. The low-key approach saw the film fly under the radar on its initial release, leaving an under-appreciated gem containing a superb Jack Nicholson performance unfairly languishing in the critical stakes. Nicholson delivers one of the most understated characterisations of his career’s golden era, just prior to spending the next decade dissolving into caricature, ironically in direct proportion to his growing superstardom. Jack gives the film the quiet strength to unlock its central message, one involving the dignity of the poor and dispossessed and also of the lines that we either draw in the sand or choose to cross. The Border is a very fine film that stands up nicely as a slice-of-life depiction of ordinary people in extraordinary circumstances. 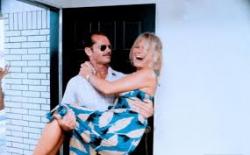 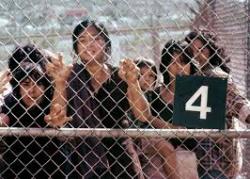 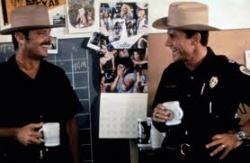 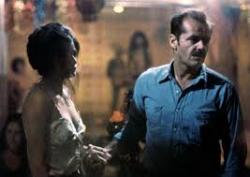