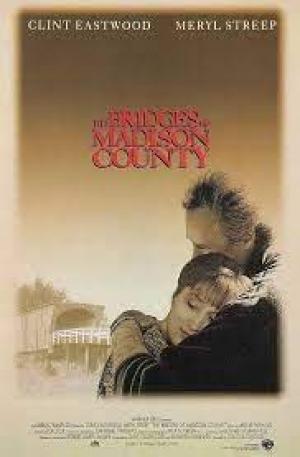 The Bridges of Madison County

A bridge too far

Some Hollywood heavy hitters thought enough of the source novel of The Bridges of Madison County that it was optioned prior to publication by Steven Spielberg’s Amblin company. Clint Eastwood was signed on to star and several directors were associated with the piece, Sydney Pollack, Bruce Beresford and Spielberg himself before the job fell to Clint. Spielberg co-produced and Eastwood favoured the script by Richard Lagravenese and wanted Meryl Streep to take the role of Francesca, who beat out Anjelica Huston, Isabella Rossellini, Jessica Lange and Susan Sarandon for the sought-after part. Eastwood roped in his frequent collaborators Jack Green for the gorgeous cinematography and old army buddy Lennie Niehaus for the top-notch score.

Two adult children return to their Iowa farmhouse in the early 1990s to finalise the estate of their dead mother, Francesca (Meryl Streep) and are shocked to find instructions that she is to be cremated and her ashes scattered at a nearby bridge. They uncover a connection with a National Geographic photographer called Robert Kincaid (Clint Eastwood) and read their mother’s account of an affair between the two in 1965 when Francesca’s husband and the two kids were away at the county fair. The flashback section shows the short affair as Robert calls in to a farmhouse to ask directions to a bridge he wants to photograph and the two begin to get know each other.

It’s clear from the opening shot of the farm mailbox (Mr. and Mrs. Richard Johnson) that Francesca is a non-person. She was an Italian war bride and found herself in rural Iowa, a fish out of water, having to adapt to a new country, a new language and customs, and raise two children into the bargain. Making a fresh start meant subsuming who she was to the dominant model of her husband’s farming community, which may have seemed like a fair exchange in escaping war-torn Europe, but feelings of identity are reawakened by Robert’s unexpected appearance. The piece is at once a romance but also a clash of ‘philosophy of worth’ – of the value of a free spirited, uncompromising, rootless life versus one of compromising and settling down. Part of Francesca envies Robert’s nomad existence, and that part of her falls in love with him. Her anguish revolves around the question, ‘Is that part of me the true me?’ and she declares in her memoirs, ‘Acting like another woman, I was more myself than ever before.’ A powerless woman, she wants to claim some agency from a patriarchal society that has put her in a box as an invisible homemaker and mother, indeed she wants to reclaim the idea of herself as lover, of herself as a solid presence.

Eastwood handles the romantic material deftly as he sets a measured tone for the pair to explore the possibilities of middle-aged desire. We witness the mutual attraction build into a slow dance of signals and code, where what is not said is as important as what is said by two people who have some miles on the clock. Eastwood is himself a fair musician, and his use of music tells a story in itself. Francesca listens to classical music on the radio in the farmhouse kitchen and has the mildest of pangs of regret when it is turned off for a juvenile pop song by her teenage daughter. This is echoed later when Francesca is like a giddy teenager and listens to pop music after organising a date with Robert. Later, when they do start to court and spark, the dance song they embrace to is delicate and adult. Eastwood is very capable of providing these grace notes to embellish the mood and also provide more coded signals rather than spell it all out with dialogue. The lovely score reinforces that trope, composed by regular Eastwood stalwart Lennie Niehaus, and the work deservedly won the BMI Award for Best Score that year.

Clint Eastwood became the preeminent macho Hollywood star in the 1970s via a series of action-packed westerns and detective films, so he would seem an unlikely director for this low key, romantic story and amongst the most unlikely of feminist filmmakers, but this is largely a feminist film given it focuses on Francesca’s viewpoint. By the mid-1990s he was an aging action star, so this film was a pointer to issues of maturity and age and what is won and what is lost in the process. Hollywood has always struggled to find great, meaty parts for middle-aged actresses, and men rarely find the same roadblocks, romancing women many years their junior and the wrinkles in the mirror get deeper. Women are held to a different standard, but here at least is a multi-dimensional role for an older woman and Meryl Streep makes it her own.

Meryl Streep is obviously one of the most revered and admired actors of any era, and this is one of the roles that shows why. The part is extraordinarily difficult, so much is conveyed in the silences and the gestures – a glance needs to convey the regret of decades or the glimmer of a different future. Streep ranges from touchingly delicate to bitterly arch and gives flesh and bones to this woman’s story in ways that reverberate and infuse the film with heart and soul. She is remarkable and Clint is smart enough to step back and revel in the interaction and delivers a fine counterpoint to her tour de force. He is at his best when he’s quiet and solid, and here he makes his strength and stillness count, but there is no doubt he feels deeply for Francesca, all the while being worldly enough to know how unlikely any future together might be.

After his masterpiece, Unforgiven, in the early 1990s Eastwood set out on a path to becoming a significant director in cinema, something also unlikely given his populist bent, but he proved the doubters wrong by coming up with consistent, robust and worthy work. With the odd mis-step and some hideous personal political stances, he has nevertheless provided some of the undisputed highpoints of Hollywood output for the 3 decades since. Hollywood is awash with mundane, overly sentimental films, most of them mawkish and manipulative in the worst way, but true and heartfelt sentimentality is rare. The Bridges of Madison County is that rare, tender bird thanks to Clint Eastwood giving it wings and Meryl Streep making it fly. Lovely. 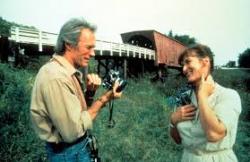 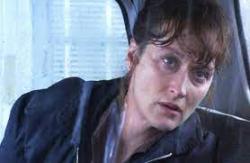 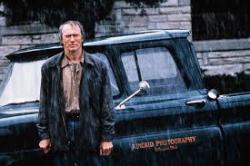