The Devil Is A Woman

In a modern world where colour is ubiquitous, taken for granted in every sense, where it is synonymous with 'reality', it's salient to recall a time in the early 1930's when black and white was pretty much all there was, and therefore the artistry of those involved in working in that form became as nuanced and skilled as that of any great artist in other fields. In the same way that the nomenclature 'pencil artist' can encompass both a single line stick figure cartoonist and the genius of M.C. Escher, so then black and white cinema comprises the mundane and functional output of the mainstream movie hack and the startling visual Mise-en-Scène  of someone like director Josef Von Sternberg. Sternberg was something of a phenomenon in Hollywood, butting heads with the studio system he worked in at all levels, but having the happy knack of mostly making films relatively cheaply and the studio exhibiting them for profit, he got away with a lot. That changed for him after The Scarlet Empress  in 1934, which cost more than double the standard feature at Paramount (who thought they were getting another hit like Garbo's Queen Christina),  didn't find public favour. Paramount refused to let Von Sternberg direct the next Dietrich vehicle, but she insisted and was a big enough star to get her way, and so he came to direct what was to be the last of their seven collaborations, The Devil Is A Woman.

The ironic tone that would infuse the film is set at the beginning as the titles play, the words The Devil Is A Woman  are backed by a jaunty Spanish musical theme. It's carnival time in a Spanish town and the local Governor Don Paquito (Edward Everett Horton) instructs his police force to not make so many arrests this year, as it creates work for him after, and to favour shooting troublemakers! The buffoonery of his offsider and the comic tone tells us this won't be a bloodbath. The carnival explodes in a flurry of movement and a riot of sexually coded images, several women surrounding a large costumed rooster (cock) that they bring under control, and the costumed bull charging at various maidens. A float goes past a masked man Antonio (Cesar Romero), and he becomes enchanted by the gorgeous woman on board, Concha Pérez (Marlene Dietrich) and follows her to her villa, she indicates that she'd be happy to meet him during her regular evening carriage ride. Antonio retires to a small restauarant and bumps into an old friend, Captain Don Pasquale (Lionel Atwill) and he relates his tale of the woman and asks if the Captain knows of her? The Captain then relates his experience of Concha, who he's known intimately for 5 years, and warns Antonio of the dangers of becoming involved with her. Antonio gives his word not to proceed with his infatuation, but allows himself one assignation to tell her of this, and condemn her treatment of his friend. That was his first mistake.

The idea of a love triangle in relation to Dietrich's character was a familiar one to Von Sternberg, and given his obsession with La Dietrich it's tempting to see this as apposite to his situation with her. He'd 'discovered' her, made her a huge star in Hollywood with his iconic, stylised and meditative framing of her beautiful face, (and constantly claimed sole credit for it) yet he did not possess her, married as she was to Assistant director Rudolf Sieber, and yet he must have identified with the 'third' part of the love story scenario's of Morocco,  Blonde Venus  and The Devil is a Woman.  The further irony being that Sieber was his assistant on The Devil Is A Woman,  the only one of their collaborations where Von Sternberg acted as cinematographer, confirming the theory that he was a world class photographer in his own right, creating a rococco visual feast.

And what a feast Von Sternberg presents. The early shots of Concha running down the stairs towards her villa are stunning, the set dressed to perfection and the framing balanced like that of a master painter. Von Sternberg knew how to visually 'exite' a frame, adding in this case the streamers or balloons of the carnival, and later elaborate masks and costumes. Where other directors filming a character climbing a set of stairs would settle for a conventional set of stairs, Von Sternberg would make the stairs angular and uneven, then shoot from between the branches of an autumnal tree or netting to further enhance the detail, or to create a feeling for space. A restaurant in which a stock scene would have a few tables with chequered cloth and some candles, becomes in Jo's world a forest of jungle foliage, lattice work and shadows, so much better for the exchanging of secrets. The cigarette factory that the Captain saves Concha from is a burst of detail and atmosphere, pulsing with the life and flavour, and after all this, there's Marlene's face, expertly lit and held up as the pinnacle of beauty, a woman to die for.

Von Sternberg usually is criticised for gliding over traditional story concerns in favour of a purely visual interpretation, but that is an underestimation of his talents. In all of his films he employed capable writers, and collaborated several times with the brilliant Jules Furthman, not the sign of someone who didn't value writing. In this film the story is a well written melodrama, but it's treatment of a poor girl who uses the only assets she has to get ahead is a telling indictment of class inequities. The upper class and wealthy men who desire her can be brutal and direct in their ambition, but are aghast when a woman exhibits the same qualities in her behaviour. Early on Concha, encouraged by a wiley mother, decided that exploiting a man's desire was the only way to succeed, and men became her toys, she reacted to real love and to simple lust or infatuation in much the same way, as a lever to use against men, until she was unable to distinguish between the differences. Concha's realisation of her callousness and therefore potential redemption comes via the unlikely sacrifice of the Captain, who when asked in a duel by Concha not to "kill the only man I've ever cared for",  in Antonio, Don Pasquale proves his love by taking a bullet for her and refusing to shoot back.

The film works superbly on many levels, but as a cautinary morality tale it hits it's stride. Concha wins in terms of having control, in having possessions, but at what cost? "What I gladly gave, you took like a thief"  is how the Captain expresses this paradox, and ultimately Concha is a deeply unhappy woman, keeping at bay the pangs of emptiness with endless distractions and capricious and sudden changes of location and boyfriend. Her tragedy is that she's acting out of compulsiveness as much as the Captain and Antonio, "there were only two way's out",  the Captain ruminated on another of Concha's painful dilemma's, "I chose a third".  The title of the film becomes ironic when you see just how much of a man's world the world Concha is born into actually is, and it's double jeopardy for a woman in a culture dominated by a deeply Catholic view of women, i.e women tempt the lower or base side of man's nature, and keep him from the Godly or divine, in other words all the troubles of the world can be sheeted home to these vile creatures!  All women are doing the devil's work. In some ways Concha dares to compete with men on their own terms, wresting control from their hands, pulling the levers for her own gain, feigning naivite but eliciting ruthlessness.

Whatever Von Sternberg's failings as a human, and he was mean and autocratic, his achievements in a roughly 10 year span ensure that cineastes everywhere will love and admire his legacy. His insistent, heightened reality and heroic emotionalism created an obsessive 'cinema du l'amour fou',  perfectly in sync with his fevered visions. Dietrich put up with him way beyond what any other actor could stomach, instinctively knowing maybe that he only had her best interests at heart, and it's his version of her that has become the defining Marlene Dietrich screen goddess. No one else came close. 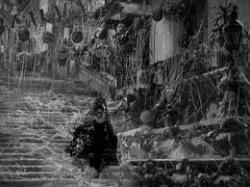 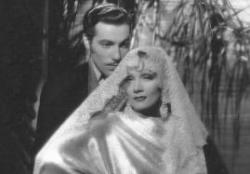 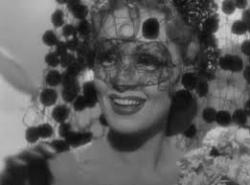 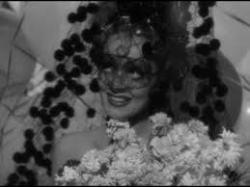 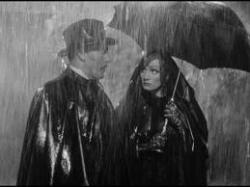 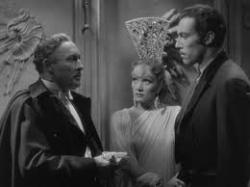 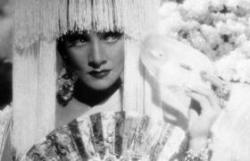