Ben's degree in a bachelor of hearts

"Art at its most significant is a distant early warning system that can always be relied on to tell the old culture what is beginning to happen.
~ Marshall McLuhan


In an astonishingly successful and varied career, Mike Nichols first came to showbiz notoriety in the ‘late ‘50s as one half of the comedy duo Nichols and May, with Elaine May. The couple were a successful nightclub and Broadway act, eventually winning a Grammy for Best Comedy Album in 1962. After the act split up in the early ‘60s Nichols fell into theatre direction, becoming a Tony Award winning director via his association with Broadway legend Neil Simon. Nichols promptly went to Hollywood to direct his debut feature, the film adaptation of Albee’s Who’s Afraid of Virginia Woolf,  which won 5 Academy Awards and garnered him a Best Director nomination. He therefore came to his sophomore feature effort, The Graduate, as something of a golden boy with the golden touch, but for once the film lived up to the lofty expectations, and also won him the Best Director gong for 1967.

Benjamin Braddock (Dustin Hoffman) returns home after 4 years, a college graduate with no plans and no direction. At his homecoming party he is pressed into driving the older Mrs Robinson (Anne Bancroft) home, where she attempts to seduce him. Ben and Mrs Robinson start up an affair, which is complicated by the arrival of Elaine (Katherine Ross), the Robinson’s daughter, who Ben promptly falls in love with. Elaine finds out about the affair and she returns to college where Ben pursues her to convince her to marry him, against the advice of all her family and friends.

Charles Webb wrote the source novel, The Graduate,  in 1963, tapping into the legacy of disaffected youth literature in the wake of J. D. Salinger’s seminal Catcher in the Rye.  Buck Henry and Calder Willingham adapted the book, turning it into a critical counterculture touchstone for the ‘summer of love’ 1967 film release, speaking directly to the growing ‘generation gap’. Benjamin is the Holden Caulfield of his generation, a young man in existential crisis, convinced of the phoniness of his parent’s values but unsure of how to separate himself from his dependence upon them. Benjamin’s literal embrace of Mrs Robinson is a metaphor for his embrace of their values, which ultimately turns out to be empty and without meaning.

The crucial difference between Ben and Holden is the context of the times each of them inhabits. In 1951, Holden spoke to a generation scarred by WWII, one on the cusp of the biggest consumer glut the world has seen as America accounted for 60% of all the consumer goods purchased in the world! Benjamin inherits a world rattled by the Cold War, the Cuban Missile Crisis and the prospect of nuclear annihilation, but also a world where the universities of America were becoming politically radicalised in ways that would have been unthinkable for Holden’s time. The West was having a collective crisis of confidence, the grey shadow world of the Cold War was not the black and white, good triumphs over evil that the victory over fascism in WWII had been. This national neurosis was reflected on the campuses of America, where issues such as Civil Rights, Women’s Rights and the Vietnam War drew a stark dividing line between the generations.

Nichols uses some sly visual metaphors to accent Ben’s dilemma, beginning with a shot of him on a plane, just one among a seemingly sedated mob. Nichols contrasts this with the final shot on the bus, where Ben is again with a mob, but this time he’s fully come to life. It’s a neat metaphorical bookend for Ben’s journey to self. Ben is overtly offered a slice of his parent’s pie, via the one word code “plastics”,  shorthand for the phoniness of the future on offer. Mrs Robinson uses Ben as a diversion from her middle class ennui, as we come to understand that she has sold out her own happiness for security and suppressed her own creative self in the process. Unfulfilled by the perfunctory sex, Ben finally gets her to talk and teases out of her information about her failed tilt at an art degree – in her he sees the direct result of selling out your dream.

Ben tells his father “I just want to be… different”,  as he struggles to articulate the depth of his disaffection. His well-meaning parents are oblivious to his needs as it does not at any point occur to them that their world could look unappetising to anyone. Mrs Robinson despises the world she’s bought into, immersing herself in a haze of alcohol in an attempt to anesthetise the pain, but the gap between her and Ben is obvious and sometimes comical. After her initial attempt at seduction Ben is confused, “You’re trying to seduce me... aren’t you?”  Ben is entering the ‘adult’ world, but his confusion and mistrust is palpable, Nichols shows it sympathetically via a clever party sequence shot in close-up to emphasise Ben’s claustrophobia. Ben finally tells Elaine, “I don’t understand the rules”,  and in the denouement as Mrs Robinson screams at Elaine, “It’s too late”,  Elaine relies, “Not for me”,  the generation gap in microcosm. Elaine embodies the hope of the counterculture, as she forgoes the anodyne future her parents offered in order to take a chance on the romantic, if chaotic choice that Ben offered.

Nichol’s Broadway background served him well in helping to extract stellar performances from his actors, enough to convince audience’s that the then 36 year old Bancroft was ‘twice the age’ of the then 30 year old Hoffman. Hoffman’s nervous boyishness presaged a new kind of Hollywood anti-hero, a feminised, sensitive man, the antithesis of the stoic old Hollywood, white hat, taciturn hero. Hoffman delivered a note perfect treatise as Benjamin, all jangly nerves and bumbling phrases, perfectly speaking to the ‘youth’ generation. Bancroft is riveting as the scheming middle aged woman and Ross is luminous as Elaine, the encapsulation of the hope for a different future. Murray Hamilton and William Daniels as the fathers are effortlessly convincing in roles that could easily have descended into caricature, they mark their presence without being showy, a lesson in the art of the character actor.

Nichol’s key decision to offer the soundtrack to hit pop duo Simon and Garfunkel was a brilliant move, albeit almost accidental, and one that further added to the counterculture credentials. Nichols had used pre-existing Paul Simon songs to pace the rough cut of the film with, but fell in love with the tone they added to the footage. He commissioned Simon to write 3 songs for the film and to agree to the licensing of the S&G songs he was using already, Sounds of Silence, April Come She Will and Scarborough Fair. Simon had a song partly finished, about looking back on a past America, called Mrs Roosevelt, and at Nichol’s insistence he changed it to Mrs Robinson, penning a classic in the process. he first presented in with a "Doo do doo, Dee de dee", verse to fill in for words he had yet to write, but Nichols loved it and convinced him not to change it, so it remained. S&G continued an association with Nichols, both offered parts in Catch 22,   before Paul’s was written out, the saga captured in Simon’s magnificent song The Only Living Boy in New York in 1970.

In many ways The Graduate  was as much a marker of the ‘new’ Hollywood as Arthur Penn’s much vaunted Bonnie and Clyde, from the same year.  In fact, Warren Beatty and Faye Dunaway were front runners for Ben and Elaine before committing to Bonnie and Clyde,  which ruled them both out. Every major middle aged actress in America was in line for Mrs Robinson, with Doris Day being Nichol’s first choice, but she backed out because of the nudity involved (as did Ava Gardner for the same reason). Nichols wanted Robert Redford initially for Ben, and tested dozens of actors before settling on Hoffman, starting him off in one of the most successful careers in movie history.

The Graduate  works on many levels, as a marker of what divides generations, but also as a reminder of what we have in common, the need for human connection. Ben and Elaine literally run away into the unknown, symbolically locking out their parents from participating with the trappings of their own institution, a crucifix in a church door!  The pair overtly denounces the institution of marriage as well, in favour of a romantic connection and a chance on the unknown, as revolutionary an act in its own way as nailing their treatise to a church door. Nichols affirms the value of investing in love, and in 1967, All You Need is Love  was a credo to live by and to hum along to. It still is.

Nichols sadly passed away at age 83 on Nov 19, 2014, and leaves behind a superb legacy. He will be remembered as a giant in theatre and film, one of the key links between the old Hollywood and the Reconnaissance that he helped fuel. His wit and insight contributed to a style of intelligent films that never sold the audience short. Thanks for the memories Mike. 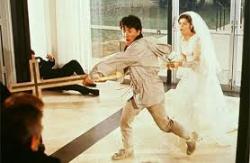