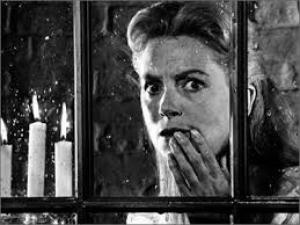 “Alone. Yes, that's the key word, the most awful word in the English tongue. Murder doesn't hold a candle to it and hell is only a poor synonym.”  ~ Stephen King

Henry James’ classic Victorian ghost story, The Turn of the Screw scored a superlative screen adaptation from Jack Clayton in 1961, and remains the gold standard for black and white cinematography and creepy gothic atmosphere. Clayton gambled against type in casting an older governess in Deborah Kerr, adding a layer of depth that doesn’t exist in the book, and simultaneously gave her one of the best roles in her long and distinguished career. Oddly, Clayton had bumped into Cary Grant in London and offered him the cameo of the children’s Uncle, but missed out on re-uniting the An Affair to Remember duo because Grant wanted the character to re-appear at the end of the film.

Miss Giddens (Deborah Kerr) is the reserved and proper daughter of a clergyman; she applies for a position of housekeeper to a wealthy bachelor (Michael Redgrave) who has inherited his recently orphaned niece and nephew, children he has “no room for… neither mentally nor emotionally”. Miss Giddens is given full responsibility for the children and travels to the remote country estate to take over their care. Miss Giddens finds the niece Flora (Pamela Franklin) to be a delight and soon Miles (Martin Stephens) travels home to join the household, having been expelled from his school for being a bad influence on other boys. The housekeeper Mrs Grose (Megs Jenkins) relates tales of the previous governess, Miss Jessel, who died mysteriously, as Miss Giddens starts to question the strange behaviour of both children.

Truman Capote worked on the screenplay, mostly based on a 1950’s stage version of James’ novel, and his Southern Gothic instincts and ability to underline the repressed sexuality of the virginal governess took the material into even darker terrain than the novel hinted at. Clayton used the ambiguities to his advantage and maintained the possibility that Miss Giddens fixations were all in her imagination. The superb art direction added to the uneasy feel of the piece, decaying plants and suggestive, naked statues from classical antiquity also adding to Miss Giddens sense of sexual confusion. Clayton clearly suggests she is infatuated with the Uncle, and her fixation with the dead gardener Quint and his scandalous relationship with the former governess serves only to amplify elements of her frustrations. “She’s hungry for him, for his arms, for his lips” Miss Giddens says of Miss Jessel, but she could have speaking about herself.

Freddie Francis, fresh off an Oscar win for Sons and Lovers, shot the film for Clayton, a masterpiece of the black and white art form, and shortly after he moved into direction (mostly a string of B grade horror films for the next 20 years) until David Lynch reclaimed him as a cinematographer for the stunning visuals of The Elephant Man in 1980. The mood of The Innocents was established early with a vocal of a haunting folk tune sung only against a black screen (distributors assumed it was a mistake) and the uneasiness holds for the entire length until the startling ‘infant kiss’. Clayton understood terror is in the suggestion, not in the showing, and it’s the psychological dimension to the story that unlocks chills from start to finish.

Deborah Kerr moved effortlessly into middle aged parts of great variety, from Zinneman’s The Sundowners to Huston’s The Night of the Iguana, and she carries off the difficult part of the brittle and beleaguered Miss Giddens with great style. She is the key performer in the ensemble, as the children function in a separate logical space given their age and understanding, so she carries the weight of making the proposition work. The visual style from Clayton and Francis makes Kerr’s task all the more easy, and even simple devices that have since become commonplace in horror films still have the ability to startle in such masterful hands.

Jack Clayton made a handful of features over three decades, sadly low output for someone of such talent upon the evidence presented here. The Innocents rises above its potentially limited genre antecedents to become a classic of any kind, beautifully framed and paced to create a spellbinding and sustained dream like ambience, wonderfully acted and superbly realised at every level. Essential viewing. 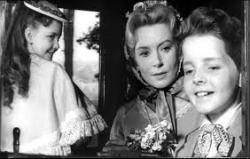 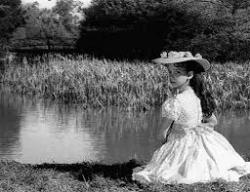 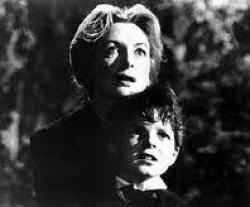