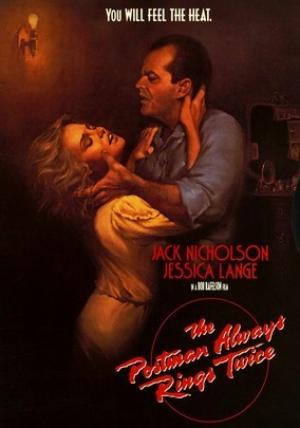 Of the many fine Rafelson-Nicholson collaborations, this endures as their neo-noir 'homage' to the '30's and as a visceral update of the dark-toned American films that followed through the next two decades. Playwright David Mamet adapted the screenplay from the James M. Cain novel of the same name, but crucially moved away from some of the choices that were made in the original American 1946 screen version starring John Garfield and Lana Turner. The novel was first adapted in France in 1939 and then in Italy in 1942 by Luchino Visconti as his debut feature, the brilliant Ossessione after his having been given a copy of the novel by Jean Renoir while working for him in France as his assistant. Incredibly Visconti never got the rights to the novel, and that allowed MGM, who produced the 1946 version to successfully suppress the showing of the film anywhere outside of Italy until 1976.

Rafelson opens with a dark highway, as the lights of a car shine on Frank Chambers (Jack Nicholson) a hitch-hiker, and soon the car pulls up in an isolated diner for a bite to eat. Frank scams the owner Nick (John Colicos) out of the food, spinning a tale of looking for a job, which has Nick offer him work around the diner and gas station. Frank declines the offer and is in the process of leaving when he spies the cook, Nick's stunning wife Cora (Jessica Lange). Frank doesn't leave. Cora instinctively knows what kind of a man Frank is, and is cool to him to start with "Do I look Greek to you" ? but it's apparent that she's in a loveless marriage. Nick is a gruff and direct bull of a man, and soon Frank and Cora are exchanging meaningful glances, and when Nick goes to town Frank makes his move. Cora is baking bread in the kitchen and when Frank grabs her she fights ferociously, but eventually the fighting morphs seamlessly into aggressive lovemaking, and in one of modern cinema's most erotically charged scenes they make love on the baking table, "C'mon"!, Cora says as she clears the bread and knives. Cora has come alive, smiling for the first time, and when Nick goes away for the night Frank tells her to pack her things as they're leaving for Chicago. At the bus depot in L.A

Frank gets involved in a craps game and asks Cora for her money, but she refuses. When the game is finally over Cora has left. Both return to the diner and Frank is upset Cora didn't believe in him, and she has doubts about the relationship. Cora tells Frank, "if it was just us" ? intimating that with Nick out of the way they'd be happy, "they hang people for that" is Frank's sombre reply. The illicit couple attempt to kill Nick in a scheme that goes wrong, but leaves Nick in hospital unaware of how he got there. Nick recovers, and Cora attempts to end the affair, but can't bring herself to make love to the repulsive Nick. The couple attempt murder a second time with a car accident, that again goes wrong, killing Nick but badly injuring Frank in the process, not before a cathartic bout of sado-masochistic lovemaking though!. A suspicious prosecuting attorney convinces Frank he's wise to the plan, "Buddy, I've seen her, I might kill for that myself", and has Frank sign a complaint for damages against Cora who was driving the car. Cora goes off the rails at the news that Frank has betrayed her, and with her lawyer and his clerk present she makes a confession. The lawyer Katz (Michael Lerner) pulls a sharp move that has the insurance companies come to terms and gets Cora acquitted, as the confession is never used in evidence at the trial. Frank and Cora return to the diner.

Cora sees business boom due to her notoriety, and now she has everything she wanted, a solid business of her own and a man who adores her, but guilt and doubt soon overwhelm her. Frank is miserable and unable to reach Cora, who goes home to visit her dying mother. Cora still has the upper hand on Frank as she's been tried for the murder and can't be again, but he was never tried for it, so Frank remains impotent. On her return the couple avoid a blackmailing scheme by the clerk who took the confession, and apart from Cora finding out about a sexual indiscretion Frank had with a lion tamer in her absence (as you do) it seems Cora is emerging from her dark funk. Cora discovers she's pregnant, and finally the couple see a future together, Frank proposes and they marry 'You just want to shut me up' Cora challenged at the offer, but Frank insists it's real, not a ploy to keep her from testifying against him as she would be his wife and unable to do so. The couple drive home from the wedding, happy and hopeful, fate intervenes.

The tone of this version is pure noir, and the camera work by Ingmar Bergman veteran and genius Sven Nykvist invests the visual with an austerity and a remoteness that underlines the alienation of the characters and the existential angst at the heart of the piece. Nicholson is fantastic as the 'hollow' man Frank, looking for an angle but completely besotted by the femme fatale of Cora. Unlike the possibly decent John Garfield variant of Frank, Nicholson's is amoral and irredeemable, driven by fate to complete his evil pact with Cora, unable to stop his compulsive behaviour. Cora too is without scruples, and Mamet never tells us how she got to that point in her life, and in a sense he doesn't have to. Cora is a magnet to man's attention and would have been since puberty, the grubby personal deals she's had to do to survive on her wits are tacit and written in Lange's wonderful performance. Nick also has a dark comment on the immigrant American dream, where his new country is a land of 'opportunity, not happiness'. The mood is '70's bleak, albeit two years late, and the pacing is almost European in area's making it a difficult watch and sell for audiences wanting faster paced thrills, but it's a testament to Rafelson's nerve that he holds the tone and it only makes the downbeat and measured ending more effective.

The Postman Always Rings Twice is about the last of Nicholson's classic period roles that presents the 'Jack' persona, and soon after he would descend to highly paid caricature and overblown cameos, apart from the odd notable exception, but films like this stand as evidence for one of the most talented and creative actor's of his or any generation. 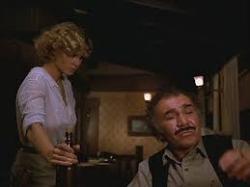 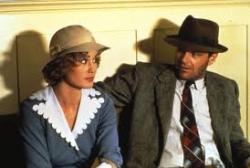 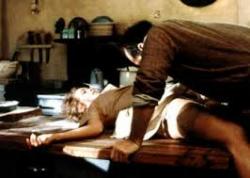 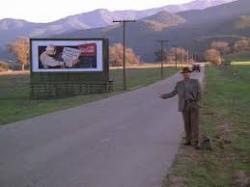 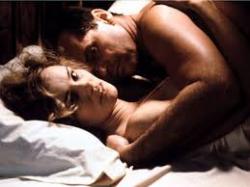