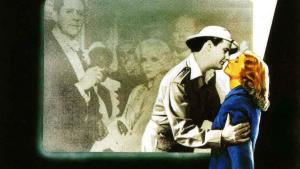 The Purple Rose of Cairo

‘The Purple Rose of Cairo’ is Woody Allen’s solipsistic homage to the escapist powers of the movies, his valentine to the silver screen and it’s illusion of a more attractive alternate reality in the B pictures of depression era America. Allen sets his fantasy within the conceit of an actor literally bringing his character to life, and in this case stepping off the silver screen to find true love and  ‘freedom’, ironically while the woman he falls in love with is trying to submerge herself in the world of the movies, infinitely more attractive than the reality she lives. Woody’s musical nous is again to the fore in his soundtrack selection, and he opens the film with Fred Astaire’s lilting voice, ‘Heaven, I’m in heaven’….

Cecilia (Mia Farrow) is a waitress, not a very good one, living in New Jersey and she’s trapped in a loveless marriage with a loafer who drinks and beats her, her only weekly escape is to the local picture theatre. After another argument with husband Monk (Danny Aiello) she goes to see the week’s new release, ‘The Purple Rose of Cairo’, an RKO programmer and is bewitched by the exotica and lavishness of the world presented on screen, as glamourous society types travel the globe at will, in this case meeting an explorer type, Tom Baxter (Jeff Daniels) and dragging him back to New York for a ‘madcap Manhattan weekend. Cecilia enjoys the film so much she goes back the next day with her sister. After a fight with Monk she walks out but with nowhere to go, she returns and the next day she’s fired from her job. With no job and not wanting to return home she goes to the movie and sits through 3 straight screenings of the film, only to have Tom address her from on screen and to walk off it, into the theatre and walk out with Cecilia. The characters left on screen are helpless as they need Tom, although a minor character, to advance the story, they begin to argue amongst themselves as the audience get dis-satisfied with the ‘entertainment’. Tom and Cecilia end up at a deserted amusement park, where Tom professes to have had his eye on Cecilia, and says he’s relishing his freedom from the predictability of his screen life.

The movie producers are informed of this disturbing development, ’It’s New Jersey, anything can happen’, and their lawyers are nervous as to what the character will do in real life, as they blame the actor they call Gil Shepherd (Jeff Daniels) to go to Jersey and help sort the mess out. Gil meets Cecilia, who confuses him for Tom, but leads him to the amusement park for the confrontation between the actor and his creation. Tom refuses to return to the screen, frustrating the ambitious actor who sees this as a career set back, as further Tom Baxter’s seem ready to leave more movie screens, ’there’s one in Chicago forgetting his lines’. Monk finds out about her date with Tom and finds the couple, beating up on Tom, who remains unmarked, ‘the advantage of being imaginary’. Tom starts to struggle with the bigger questions in the real world, poverty, pregnancy, God and ends up being taken to a brothel by a hooker (Dianne Wiest) only to charm the girls with his guileless philosophies. Meanwhile Gil and Cecilia get to know each other, and share an equal love for Gil’s talent. Cecilia is a true fan, even name checking the little seen musical ‘Dancing Doughboy’s’ before swapping dialogue from it word for word with Gil. Woody gets in some priceless chops on the vanity of an actor, as Gil falls in love with Cecilia who tells him ’you’ve got a magical glow’, but essentially he’s just re-falling in love with himself. Tom takes Cecilia on a whirlwind romance on the other side of the screen, giving her a taste of movie fantasy, but ultimately she has to choose between Tom and Gil. She chooses reality and packs her bag finally to leave Monk, but turning up to the theatre to meet Gil and leave for Hollywood with him she’s told he’s already left. She walks into the theatre to see the new feature, Fred Astaire sings ‘Heaven, I’m in heaven’ and Gil sits alone on a plane, seeming like he’s lost something.

The set up allows Woody to wax lyrical on many delicious contradictions, and the brilliant dialogue comes thick and fast. The cast is A-grade and the supports superb, Broadway great Zoe Caldwell and Hollywood veteran Van Johnson have some great moments as the stranded screen actors waiting for the minor player to return, it’s Johnson who posits the solipsistic proposition ’we’re reality and they’re a dream’. Ultimately Allen is saying that we’re all seeking an alternate reality, the real humans want what the fantasy screen world represents and the screen figures want escape to freedom, either way both are condemned to repetition, one scripted the other regulated by societal convention. Gil’s sadness at leaving Cecilia is tempered by a level of self-awareness that intrudes upon his shallowness, that he’s lost whatever hope he had of connecting with reality, but he’s sold his soul to Hollywood and there’s no place there for the decency of a girl like Cecilia. Woody knows the dream is just that and avoids the happy ending, leaving that to ‘only in the movies’. Like ’Sullivan’s Travels’ some 44 years before, it concurs that escapism to a celluloid fantasy is all some people have.

Woody Allen has fashioned a brilliant and witty entertainment that is not just clever it also touches and warms the heart. His then wife Mia Farrow is superb as the put upon waitress who finds another true innocent in an on screen character with no guile, ’ I’ve just met a wonderful man, he’s fictional but you can’t have everything’. Jeff Daniels matches her in his dual role as Gil/Tom, capturing the naive and one dimensional Tom and the calculated charm, vanity and odd mix of insecurity and ambition of Gil. Woody would re-visit this theme of life and fiction and fantasy colliding with another character called Gil in 2011’s ‘Midnight in Paris’, a worthy companion piece to this sparkling gem of a film. 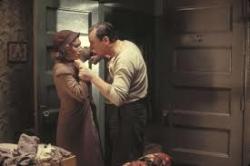 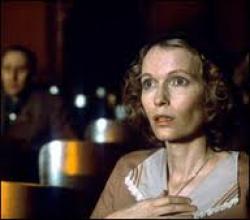