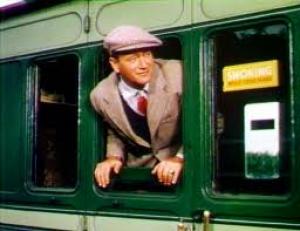 John Ford was a mythmaker of the first order, and after defining how Americans (and the world for that matter) viewed the old west he turned his attention to the land of his parents and created a storybook Emerald Isle of idealised blarney, peopled by stereotypes and ciphers, but totally charming and beguiling nevertheless. Ford’s relationship with Ireland was complex, he liked to tell everyone he was Irish, and in his own estimation maybe he was, but here the Maine born American examined Ireland through a sentimental and singular lens. Ford’s Irish roots ran deep, his cousin was a famous rebel playwright, Sean O’Casey, and Ford himself had directed one of O’Casey’s works on screen in the ‘30’s, even sending money in support of the IRA in it’s struggle to end English rule. By the 1950’s Ford had mellowed enough to want to produce a gentle homage to the Ireland of his dreams, and so settled on the light romance of his long held ambition, The Quiet Man. The film contains many Fordian tropes, but emphasises a central Ford tenet, the essential difference between men and women, and the endless longing and yearning for the ‘other’.

Sean Thornton (John Wayne) is a big American, a prize fighter who has returned to the land he left as a child to reclaim his family home. He spies a beautiful young neighbour, Mary Kate Danagher (Maureen O’Hara) and instantly falls in love. Thornton battles acceptance from the locals and belligerence from Mary Kate’s brother ‘Red’ Danagher (Victor McLagen) as he tries to establish himself and win her heart. Sean is aided in his endeavours by Michaeleen (Barry Fitzgerald) the local matchmaker and bookie, who sets the rules of engagement for the smitten couple, and the wily local priest (Ward Bond). Red fumes as Mary Kate returns Sean’s affections, and before long the inevitable confrontation consumes the small township, but Sean is fighting on two fronts as Mary Kate has firm ideas of her own on the rocky road to marriage.

Ford had been attempting to film this story for some 15 years, but could not get backing until the president of Republic Pictures, Herbert Yates, stumped up the money, albeit with the proviso that Ford deliver a western first! Ford obliged by filming Rio Grande, the last instalment in his cavalry trilogy, and set off for Ireland in the summer of 1951 with his legendary stock company, and most of his family, in tow. Ford had noted liberal Frank S Nugent write the heartfelt screenplay, after passing him over for reactionary James McGuinness on Rio Grande, a thinly veiled anti-communist polemic with Indian grotesques as the faux ‘reds’. Ford keeps his political views here to a minimum, preferring instead to focus on the human relationships and on the couple’s attraction, “the first love story I ever tried, a mature love story”, he told interviewer (and future director) Lindsay Anderson.

The combative lovers, Sean and Mary Kate, were played by Ford muse John Wayne and his red-haired favourite Maureen O’Hara, after Ford had made a “handshake deal” with the pair some 8 years earlier. Herb Yates hated the casting of Wayne in the “phoney art house picture”, and feared the pacifist fighter role would harm his then huge box office clout. Ford briefly considered casting Robert Ryan, but possibly averred given the political climate of the time and Ryan’s known leftist leanings. Wayne, who may not have had the psychological edge of Ryan, gives Sean enormous heart, and brings out the romantic dimension of the character in one of his best roles for his mentor (and tormentor) Ford. O’Hara is luminous as the delectable Mary Kate, lighting up the screen and creating a surprisingly independent character, fiercely protective of her own identity, living as she does trapped in a patriarchal culture where her worth is inextricably tied to the men in her life.

Ford stalwart Victor McLagen, who’d won his Best Actor Oscar for Ford’s The Informer, brings his powerful presence to Red, and his son Andrew tagged along and worked as a second assistant director. Andrew learned well at the feet of the master, going on to have a notable Hollywood career in making mostly good to fine westerns for the next few decades. Ford whipping boy Ward Bond filled the minor role of the priest, and brings his usual solid bluster to bear.

Herb Yates was also uneasy about the political tones in the written piece, and succeeded in having Ford water down the subtle rebel references, even though Ford had already made a major change from the short story on which the film is based, that of eliminating Sean’s IRA connection. It seems Ford’s war time experiences may have moderated his desire to incorporate a conflict as nuanced as the Irish struggle against English rule, and it’s not ever made clear just in what era the film is set, even though the short story was actually set in the ‘troubles’. Ford keeps some impish and subtle references however, particularly in Fitzgerald’s scene stealing Michaeleen, “Well, it’s a nice soft night, I tink I’ll go join me comrades and talk a little treason”, comedy with a dark edge. Ford hints at the rebel antecedents of the piece with the canny use of the ballad, The Wild Colonial Boy, much loved by Australians as well as Irish, telling as it does the tale of an Irish convict turned bushranger (highwayman) in the antipodes. The original Irish version was outlawed as seditious, and the Australian variation speaks of the fight against tyranny, and Ford probably saw himself as a wild colonial boy at some level.

The Quiet Man has come to be viewed in some circles as a sly critique of McCarthyism, showing as it does a man rejecting America, something unusual in any American film of the era. Ford was something of a paradox politically, and by the early ‘50’s he’d moved away from his earlier liberalism and appeared aligned with his right wing mates Wayne and Bond in the reactionary Motion Picture Alliance for the Preservation of American Ideals. The MPA, whose literature was penned by none other than Ayn Rand, loudly led the witch hunts that attempted to purge Hollywood of any supposed communist influence. At the height of McCarthyism Ford famously rebuked Cecil B DeMille’s attempt to highjack the Directors Guild and create a de facto blacklist, in what seemed like a liberal stand on the issue, but then privately apologised to DeMille. Ford spent a large part of the rest of his career eulogising the American military in some of his worst films, and indeed just prior to The Quiet Man he produced the appalling documentary This is Korea!, a blight on his artistic judgement if nothing else.

It may instead be that Ford was over compensating for his perceived liberal past, much like Frank Capra, as he also found himself under suspicion from Hoover’s FBI, and was merely ensuring his ability to continue working in the highly charged climate. Work was life to Ford, much as it was to Kazan, and Ford’s methodology of achieving this end certainly avoided the pitfalls and stresses of Kazan’s much publicised path. John Ford was so much of a contrarian it’s impossible to know if The Quiet Man was simply his valentine to his Irish roots, or a subtle reminder that his liberal and humanist credentials still ran deep. Ford did, after all, direct the masterful The Grapes of Wrath, surely enough to get him blacklisted for life if it was anyone else?

Ford was very capable of lining his work with artistic and poetic dimensions, and then of bald faced denials that they existed at all, and in creating a picture book Ireland with stereotypes and caricatures he knew exactly what he was doing. “Only and American would have thought of emerald green”, is the sly comment a local makes on Sean’s renovated home, resembling as it does a real life Disney version of an Irish cottage. Ford was really creating a refuge for himself in his ‘dream’ Ireland, one for his tormented soul to take comfort in when he needed to seek solace from the demons that consumed him. At the time Ford was going through a huge estrangement from son Patrick, battling depression and binge alcoholism, as he managed the small army needed to create a motion picture. He was low enough on one day to have Wayne take over some direction to cover for him, and Wayne commented on how depressed Ford had become. Once more John Ford put family and social institutions at the forefront of his work, asserting their primacy in human affairs, even as his own family life was a shambles.

The Quiet Man survives as a charming fable of two people finding each other in the nick of time. Sean needs a woman like Mary Kate to heal the wounds of his past, and she needs him to complete herself, a man who wants her for who she is, with whom she can be her true self, the perfect complimentary pairing. In this Ford creates a timeless tale, one that rises above political considerations and posturing, and it’s probable that was his intention all along. That he did it so well was noted by the Academy, which awarded him his record 4th Best Director gong, and also recognised Winton Hoch’s marvellous technicolour cinematography in the bargain. Ford’s dream Ireland remains as elusive as Lorna Doon, as impossible as catching the morning mist off the mountains of Mourne with a pitchfork in the wind, but a beguiling destination nonetheless, and Yates had to eat his words about “phoney art house film”, as the picture became one of the biggest hits in Republic’s history. 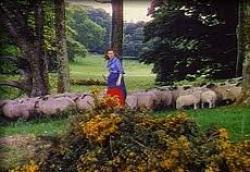 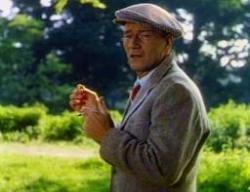 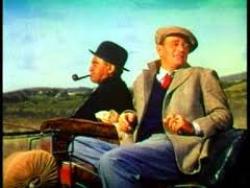 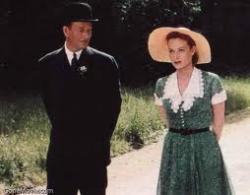 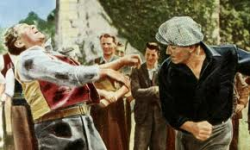 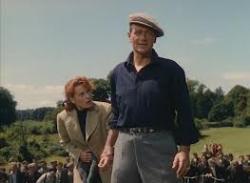 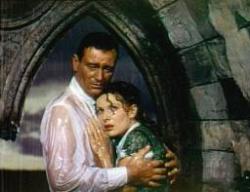 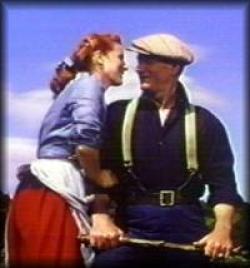