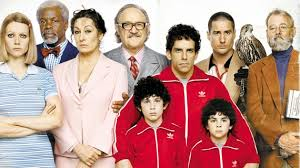 "I have a way of filming things and staging them and designing sets. There were times when I thought I should change my approach, but in fact, this is what I like to do. It's sort of like my handwriting as a movie director. And somewhere along the way, I think I've made the decision: I'm going to write in my own handwriting."
Wes Anderson

Wes Anderson has achieved the near impossible feat, anthropologically speaking, of carving out an identifiable signature style in a mass media form. Love him or loathe him, it’s hard to mistake his work in film for that of anyone else's, except maybe a preppy Whit Stillman? The Royal Tenenbaums represented a perfecting of the tropes hinted at in his quirky debut Bottle Rocket, and his sophomore effort, the even stranger Rushmore. Anderson’s magic resides in his lightness of touch, and his sureness of tone, and in finding the right actors to go along with his vision. In other hands, what appears insightful under Anderson’s stewardship would come off as twee and cute. Anderson manages to find whimsy, and charm, and yet balance it out with tragedy and an over-arching sense of regret, a bittersweet confection that leaves a lasting taste.

Royal Tenebaum (Gene Hackman), estranged from his preternaturally talented "family of geniuses" and borderline destitute at the tail end of his working life, seeks to reconnect with them. He finagles his way back into the household by telling his children he has six weeks to live and seeks to redeem himself in their eyes over that time for all his failings as a father. Royal's children, Margot (Gwyneth Paltrow), Ritchie (Luke Wilson) and Chas (Ben Stiller) all battle various neuroses and events as they attempt to incorporate their father into their fractured and difficult lives, having never lived up to the promise of their early talent. Etheline (Angelica Huston), Royal's estranged wife, is seeing another man and does not welcome her husband back, but grows to see his attempts to "put things right" are sincere, as Royal brings his quirky charm back to re-energise his deflated family.

Anderson is a master of creating a sombre and understated melancholy, of tapping into the ineffable sadness that underpins all human life given our awareness of our own mortality. Rather than dwell on the maudlin, Anderson balances the ledger with the breezy sweetness of Royal's cock-eyed optimism, as the patriarch of the family reminds them of the importance of the 'inner child'. Royal's quiet desperation is not only for himself, as he earnestly wants his children (and grandchildren) to awaken themselves to the joys to be found in living, and not to squander the gift of life on depression and self-loathing, not to be "scared of life". Royal, who has lived a selfish and self-centred life, now sees the result in his neurotic brood and sees he must turn things around for himself and for them. "Closeness to death has changed me", he says, "You were never dying", is the ironic reply.

Anderson and his close collaborator Owen Wilson, demonstrate a fine ear for language and a brilliant knack for casting to fit what they write. The ensemble piece demands great balance and discipline, for if one part is out of kilter the whole suffers, but here Anderson has no such problems. Gene Hackman is simply superb as Royal, the crucial centrepiece on which the entire endeavour spins, oddly reported to not have enjoyed the experience at all, and not to have got on with his director. Regardless, Hackman turns in a late career best characterisation, in a role that demands nuance and depth, a world away from the mainstream fodder that Hackman fell back on post Eastwood's remarkable Unforgiven.

Stiller, Paltrow and Luke Wilson also beautifully fill the key roles of the children. Stiller's boxed up intensity is ideal for Chas, the international finance genius who successfully sued his father as a child and is paranoid for the safety of his two sons. Paltrow is wonderful as the depressive Margot, beautiful and deadpan, a shell of a woman who can't find happiness with stitched up hubby (Bill Murray) or Tenenbaum wanna-be Eli Cash (Owen Wilson). Luke Wilson makes the most of the difficult role of Ritchie, the tennis champ, and brings pathos and humour to the role, releasing the overtones of existential resonance as he releases his Falcon, "Go Mordecai"!

Anderson stiches his projects together like elaborate tapestries, full of fine and sometimes fleeting detail, and he puts evocative touches to even minor back-story components. His visual style is unfussy but effective, and he favours theatrical set up's when putting his characters into conversational scenarios. This gives the feeling of imposed artificiality, which underscores the 'near reality' of his approach, a decision that allows him enormous latitude in tone and texture. The use of music has become a signature area of Anderson's work, and in The Royal Tenebaums he delivers at every point. It makes for a full experience, where the viewer is taken on a ride through a wonderfully realised faux-world, as surreal as it is possible, a kind of fantastic cinema shorthand set to insightful and expressive tunes. Jackson Browne's wistful These Days, rendered in Gallic monotone by Nico, is the perfect companion for Margot's travails, as is the two pastoral Rolling Stones songs from Between The Buttons that accompany her moments of connection with Ritchie in the tent scene.

Wes Anderson may not be for everyone, but he has continued to construct interesting and meaningful cinema that speaks to the human yearning of belonging. Most of his films involve borderline eccentrics, struggling to fit in a world that superficially has no place for them, and so they must carve out their own bespoke universe. Reflective and witty, Anderson's films evoke the mystery of the relationship of formative childhood to the formed adult, and to examine how we deal with the resultant conundrums. The Royal Tenebaums is comedy with an arch melancholy at it's heart, and it exists in the same magical-realism territory inhabited by the cinema of Charlie Kaufman and of Jean-Pierre Jeunet. One of the great American films of the naughties, and one to get lost in again and again. 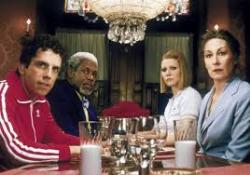 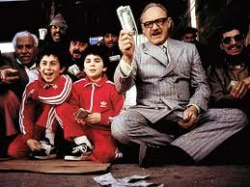