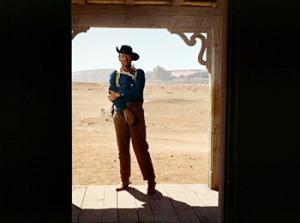 The Searchers is a key step in the evolutionary development of cinema, and not just westerns. Post WWll mores were changing and this contributed to a new climate of freedom for film artists to present more dimensional characters in the mainstream. Roughly speaking prior to the early fifties in ‘Hollywood’ pictures the good guys were good and the bad guys were bad, so called ‘psychological’ drama was the domain of urban settings like film noir, not westerns. Acting styles were becoming more realistic and all of these factors set the ground for The Searchers. The lines were beginning to blur enabling Ford to create a different kind of work, but still identifiably Fordian of lasting power and beauty, and set in his favourite locale, Monument Valley.

Based on an incident in 1839, where Indians kidnapped a young white girl, Alan LeMay wrote the novel that Ford commissioned Frank Nugent to turn into a screenplay. Rather than focus on the girl (who in real life committed suicide after her return) the film follows the man who searches for her. Ford called it a ‘tragedy of the loner’ and it serves as a metaphor for his own life. Ethan Edwards (John Wayne) is a man outside of his own life, the cherished family he holds dear is something he cannot truly connect with as he loses himself in his obsessive chase. Ford’s obsession was his work, and when he wasn’t making movies he was drinking. He repeatedly made films that championed the family as the cultural bedrock of society, yet he shamefully neglected his own family life. Both Ethan and Ford have demons that remove them from the ‘ideal’ of family, and The Searchers is a spotlight that can easily be turned back on it’s creator, showing a dark underbelly and troubled soul.

In a logistical exercise that would have done the Army proud, Ford trekked deep into Monument Valley to set up hundreds of technicians and support crew, dozing roads where there were none and building ranches from scratch. He used his stock crew and company, and they mostly gave some of their best performances, none moreso than Wayne. Howard Hawks had coaxed a multi-layer performance out of him in Red River, and here Ford pushes him even further. Ethan Edwards is a misfit, revered by his family as a kind of mythic frontiersman, he is a mass of contradictions. He returns home from a war long over and it’s clear that he’s been doing things on the edge of the law and maybe even morality, as the unmistakable signals between him and his brothers wife attest to.

The timeline makes clear the possibility that Debbie (Natalie Wood) is Ethans daughter. After his brothers family is massacred by marauding bands of Comanche and his two young nieces abducted, Ethan takes Martin Pauley (Jeffrey Hunter), his brothers adopted son and part Indian, along for the search to get them back. Ethan is at once a racist towards the Indians but well acquainted with their ways and admiring of some of their traits. After a long period passes it’s obvious that Ethan would prefer Debbie dead rather than contaminated as an Indian wife. This sets up the tension between him and Martin. The Indian Chief Scar (Henry Brandon) is barely shown, and is therefore much more menacing as a result. Scar, as if summoned from Ethan’s id serves as a mirror of Ethan’s own darkness, someone not about to let conscience get in the way of rough western justice.

Ford allows that no side is completely innocent that lives on the edge of civilisation, having one of the women muse that it’ll be ‘100 years’ before it’s any different in these frontier regions. People on both sides are reduced to feudal or tribal modes of surviving, and Ford isn’t championing western civilisation as any better or worse than the Indian one it’s displacing, it’s just what happened. In these times of ‘political correctness’ it seems fashionable to downgrade Ford, particularly in his attitude to Indians. The Searchers bears the brunt of this revisionist slant, but upon close examination the claims don’t hold up. The Indians are the ‘other’, and serve as a scapegoat for all kinds of prejudices that are laid out in the course of the film. The racist views on display were common views of the time (1868-1873), indeed in the mid-fifties while the film was being made. the civil rights struggle was only just starting up in the southern US states. Ford shows the Indians as people both struggling to adapt and fighting back. Ford was well liked by the local Navajo’s whenever he filmed in Utah, and went on to make films that were more interested in the Indian perspective.

The history of humankind is one of repeated demonisation of certain minority groups or races, and while that is an uncomfortable fact it is a truth we must face. Ford, apart from lapsing into providing the odd easy stereotype of Indians, Blacks and even Irish (add drunken sailors, martinet military men, stoic mothers et al) is reflecting broader community values and need not be held to a higher accountability than anyone else. The scales are more than balanced by his providing some of the most significant celluloid storytelling and memorable characters that will continue to illuminate the human condition for successive generations. Not a bad feat for John Ford, someone who continually and disingenuously denied being an artist. The Searchers will endure, not just at the top end of the Ford canon, but in the highest realms of all cinema. 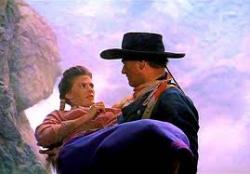