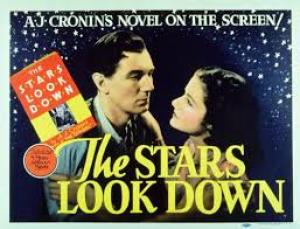 The Stars Look Down

Carol Reed cut his teeth on the ‘quota quickies’ of the 1930s, the legislated measure that ensured British films would be screened alongside their popular American competition. He worked his way into the front ranks of British directors with a series of well made, unpretentious and popular entertainments like Bank Holiday and A Girl Must Live, before making a name for himself as a serious artist with The Stars Look Down  in 1940. Reed cast Margaret Lockwood and Michael Redgrave in the lead roles, reuniting the couple who’d starred in the marvellous Launder and Gilliat scripted, Hitchcock directed The Lady Vanishes  in 1938. The darkly beautiful Lockwood was something of a Reed favourite, completing seven films for him in a six year period up until 1941, and Redgrave also fronting the camera three times for the talented English director.

Davy Fenwick (Michael Redgrave) is a miner’s son in a coal mining village in the North of England, but he hopes to escape the inevitability of working in the pit by getting a university education. The miners fall into a dispute with the mine owner over the safety of the Scupper Flats seam and the potential for it to flood, and this leads to a resolution to strike that cripples the village. Davy wins a scholarship to Baddely College in Tyneside where he hopes to bring the plight of coal miners to the attention of influential politicians. The miners return to work on the Scupper Seam and Davy falls for Jenny (Margaret Lockwood) in Tyneside, who convinces him to marry her and abandon his dreams of a University degree. The newly married couple return to the mining village where Davy becomes a school teacher, still worried about the potential for disaster at the mine.

The film represents A.J.Cronin’s best selling novel in a slightly truncated form, but stays true to the tenor of the book, Cronin himself doing un-credited work on the screenplay. Reed himself was no socialist, and had “no particular sympathy for the working class”  according to a later statement; he considered he was “just doing what was best for the story”.  Either way the film is a remarkable achievement as it espouses a leftist agenda and argues for the nationalisation of coal mines, but frames the idea within a deeply humanist examination of the lives of ordinary people. The quiet heroism of ordinary people serves as the backbone of the film, and Reed uses a doco-realist tone for much of the narrative, particularly in the atmospheric scenes around the mine.

The socialist politics that underpin Davy’s ambitions should be read in context with the time, as Europe was firmly in the thrall of right wing fascism, and only months away from a war that stood against that stifling ideology. Socialism, and in some ways communism, were seen as the hope of the working class, the horrors of Soviet communism not yet widely known, and even America had embraced the mildly ‘socialistic’ program of Roosevelt’s New Deal, the government investment in infrastructure that pulled the country out of the Great Depression. Cronin presents Davy’s struggle on two fronts, against the boss and his intransigence and also against the idea from his own class that it’s “High fallutin’ rubbish”.  Davy is committing the cardinal sin in class riven England of ‘getting above his station’, as he attempts to combat the casual though ubiquitous discrimination woven into the tapestry of society.

Davy recognises the inequity and injustice of the class system and even sees members of his own class who subscribe to the agenda of the bosses, particularly Joe (Emlyn Williams) “You’re a born capitalist Joe”,  Davy tells him, before Joe throws the first stone to start a mob raid on the butcher’s shop. Davy’s struggle intrudes on his relationship with Jenny, who buys into the consumerist trap of getting items on the ‘never never’, a hire-purchase contract that generally had usurious terms that favoured the companies. Cronin writes Jenny as a vain and narcissistic woman, and Lockwood plays it perfectly, in one of the most unsympathetic roles she ever played. Redgrave is wonderful as the noble poor boy, investing a dignity and delicacy of tone in his work, and Williams is fine as Joe the spiv, the self obsessed class traitor.

The Stars Look Down is a beautifully framed and photographed film, and Reed moves freely between the realist eye he applies in the mine sequences and the Poetic Realist  visual touches he applies elsewhere. Influenced by the French genre he was so fond of, there are some startling moments, particularly when he captures Jenny in the rain from the window of Davy’s student room, she looks like a phantom, a portent of and the perfect embodiment of the travails to come. Reed later developed his visual style with expressionist angles and atmospheric lighting in masterpieces such as Odd Man Out  and The Third Man.  The cinematographer for The Stars Look Down  was Mutz Greenbaum, who went on to film the superb London noir for Jules Dassin, Night and the City.

The Stars Look Down is a lesson in understatement, devoid of overt sentiment and redolent with gorgeous and subtle moments, especially in Davy’s and his mother’s interactions. The film is a thoughtful and ambitious essay of the divisions within British society, and a tribute to the determination and quiet resolve of the working class to carry, a trait that would come to the fore in the war years. Carol Reed became one of the most significant of British post war directors, and this film is the marker to his more mature and assured style, and one of the finest British films of the period.

* A warning about the American version, it has a sentimental voiceover from Lionel Barrymore, and a quasi-religious finishing sequence involving a prayer and shots of sunlit clouds, totally outside of the tone of the remainder of the film. The British cut concludes with a beautiful scene between Davy and his mother, completely in sympathy with Reed’s vision. 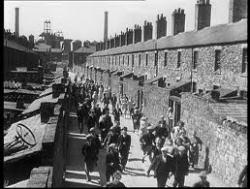 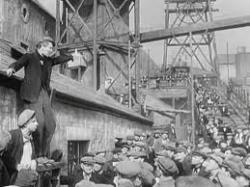 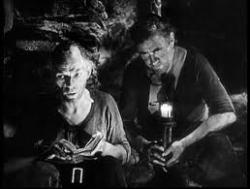