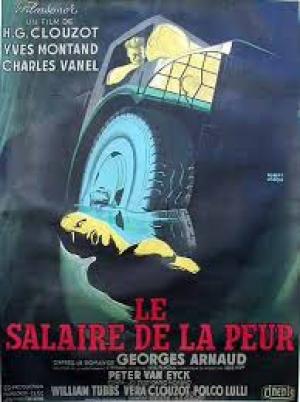 The Wages of Fear

Henri George Clouzot continued a fine streak of enervated post war French cinema hits with his essay on tension and courage, The Wages of Fear (Le Salaire de la Peur),  and scored his first international hit into the bargain. After an excursion with new wife Véra to South America in 1950, Clouzot came back with the Georges Arnaud novel about four truck drivers having to take nitro-glycerine across some bad roads to extinguish an oil fire and began working on a script with his brother Jean, who wrote under the pseudonym of Jérôme Geronimi. Clouzot wrote in a part for his wife Véra as no female roles exist in the novel, and set about the arduous schedule of filming which was to last a year and a half.

Mario (Yves Montand) is a narcissistic loaf, whiling his life away in a tiny village in South America with no money and no prospects. What little allure the village holds is encompassed in the sexy bar girl Linda (Véra Clouzot), who is in love with Mario, who treats her like a dog. Near the village an American company, the Southern Oil Company has an operation, exploiting the locals and providing poor working conditions for those that can get the sought after jobs. Jo (Charles Vanel), a new arrival struts into the village, preening and bullying and looking for an angle to make life easy. Mario befriends Jo, at the expense of spending time with Linda, or with his big hearted roommate, the Italian Luigi (Folco Lulli). A huge oil fire breaks out on the SOC site 300 miles away, and a shipment of explosive nitro needs to be urgently delivered so as to extinguish the blaze. The emergency means an opportunity for four men to make the hazardous trek, and if they survive the ordeal they’ll walk away with $2000 each, a fortune in their terms.

Clouzot had survived the occupation of France and WWII, an obvious ordeal of fire for many Frenchmen, and the subsequent trauma of being unfairly convicted and banned from working for collaboration saw him lean towards projects that presented humanity under pressure, forced to confront darkness both external and internal. The men in this film are first rate losers, barely better than the beggars on the streets that they despise, and unusually in the moral cinematic climate of the ‘50’s, the money on offer represents no element of redemption, it purely represents escape. Poverty and circumstances have reduced these men to an animal condition, and Clouzot does not spare the audience in showing just how ugly that level of existence is. “It’s like prison here”  Mario tells Jo upon his arrival.

The American release saw fully 20 minutes of footage removed, typically scenes that reflected poorly on the corporate imperialism that caused so much pain and division. In a region with not much to offer a prescient observation explains the Yankee presence, “When there’s oil around they’re not far behind”.  Plus les choses changent? Clouzot lets the power imbalance speak for itself mostly, but occasionally he shows it in its breathtaking brutality, as when 4 men are killed in the gas explosion and the American manager instructs his minions on how to answer questions, “Put all the blame on the victims”.

Clouzot and his brother wrote the screenplay and purposely created a multi-ethnic group of protagonists as a metaphor that hints at the co-operative needs of post war Europe, Mario is a Corsican, Jo a Frenchman, Luigi an Italian and Bimba (Peter Van Eyck) a German. The men all must find a path that reflects individual effort and collective will, a series of accommodations that mirrored the messy politics of Europe post WWII. Clouzot also focuses on the existentialist dilemma that they face, particularly within Mario’s personal journey, one that counterpoints his interior struggle with the exterior struggle in a hostile environment. Mario finds his worth in repudiating Jo’s cowardice and in echoing and affirming the ordinary heroism of his friend Luigi. Mario looks deep into his own soul to see if he can find someone worth saving, and to find a future that allows him to live with himself.

Armand Thirand worked closely with Clouzot over his entire career, and was the cinematographer in almost all of the features Clouzot made, and the camerawork in The Wages of Fear  is simply stunning. The myriad angles and set up’s, framing and lighting are intricate and effective at every level, never settling for the obvious or the banal. The music from Georges Auric combines with the stunning visuals to create a potent brew of suspense and tension, allowing for a nail biting and vivid depiction of the drive across the bumpy roads. The time and care that Clouzot demanded is etched into every frame, as like his rival Hitchcock he preferred to have everything storyboarded before he rolled film. Not one for improvisation at any level, “I’m terrified of the blank page” Clouzot said by way of explanation, the film is packed with detail and nuance.

Clouzot cast music heart-throb and matinee idol Yves Montand against type as Mario, the anti-hero of the story, and after Jean Gabin turned down the plumb role of Jo, Charles Vanel took the part and duly walked away with the Best Actor award at Cannes. Clouzot’s demanding ways had him garner a reputation as something of a tyrant on set, bullying and terrifying his actors, including his wife! Brigette Bardot, who would work with Clouzot a decade later called him the Devil, but went on to say “The devil is very attractive”,  meaning he had a charisma and charm with it and was able to extract her best acting work in the process of cajoling and bullying her. Vanel is very fine as Jo, commanding and blustering in the early scenes as he exudes confidence and conversely convincing as the shell of a man shattered by the relentless tension and fear that the truck driving job entailed. The lesser, supporting roles are all filled with performances of verve and wit, adding an effortless verisimilitude to Clouzot’s compelling and commanding work.

On the back of the film’s international success Clouzot found himself a feted and acclaimed master of cinema, almost immediately confirming his lofty ascension by producing the remarkable Les Diaboliques,  another world wide hit. The Wages of Fear  deservedly won the Palme D’or  in 1953, as well as Berlin’s Golden Bear, and although a commercial hit in his home country Clouzot would enjoy little approbation from the influential critics at Cahier du cinema,  who associated Clouzot with a moribund ‘Tradition of Quality’, their “cinema du papa”.  It seems scandalous now that the likes of Godard and Truffaut and Rivette all remained immune to Clouzot’s ability, and even more unfathomable was the fact that Claude Chabrol was amongst their number, who himself would enjoy a later reputation as the French Hitchcock.

The Wages of Fear  remains one of the high points of cinema in the 1950’s, a brilliant and fearless study of men under pressure and a virtuoso technical achievement that still stands as one of the best ever. 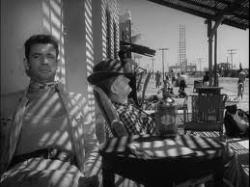 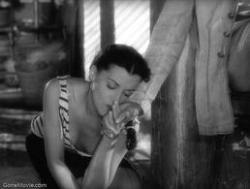 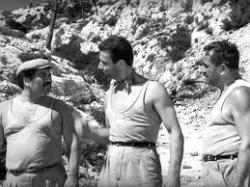 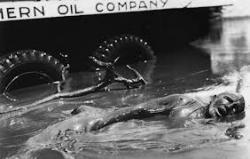 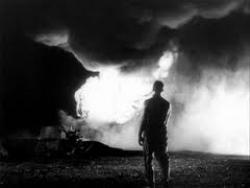