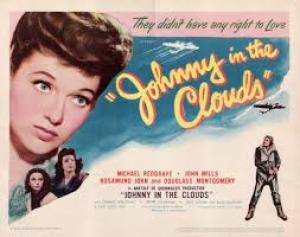 The Way To The Stars

"Do not despair ... for Johnny-head-in-air;
He sleeps as sound. ... as Johnny underground.
Fetch out no shroud ... for Johnny-in-the-cloud;
And keep your tears ... for him in after years.
Better by far ... for Johnny-the-bright-star,
To keep your head ... and see his children fed".
~ John Pudney

The Way To The Stars is a superior WWII drama, beautifully directed by Anthony Asquith and a showcase for several fine British actors, prime amongst them Michael Redgrave, John Mills, Joyce Carey and the too-rarely-seen Rosamund John. For Asquith, it is one of ten collaborations he made throughout his long career with his good friend, the playwright Terence Rattigan, with whom he enjoyed a 30-year association, and remains one of their finest works. Like many young men from all walks of British life, Rattigan served in the military during the war, and his experience and empathy lies at the heart of this modest masterpiece, as assured and insightful as any effort to portray life during wartime.

David (Michael Redgrave) is a crack pilot working out of Halfpenny Field in England and regularly flying missions across the Channel in 1940. He is responsible for new recruits and meets Peter Penrose (John Mills), who initially struggles to make the grade, but who improves and becomes David’s best friend. David is in love with the local hotel owner, Toddy (Rosamund John) and they marry and have a son, called Peter. Two years later and Penrose is about to ask his sweetheart Iris to marry him but gets cold feet after David is killed in a mission over France and feels he has no right to commit to a long-term relationship. The Americans take over Halfpenny Field and Toddy forms a platonic attachment with Johnny, a married American flyer and the two disparate parents bond over young Peter, a reminder of Johnny’s children back home. Toddy reads Johnny a piece of poetry (printed above) about flyers that David had written, the only time she shares the poem with anyone.

Terence Rattigan carved a significant name for himself in both British theatre and film, with a deft skill for observations of English reserve and sublimation of feelings when under pressure. Rattigan, who was educated at Harrow and who had a similar upper-class pedigree as his friend ‘Puffin’ Asquith, (whose father was a British Prime Minister) originally wrote his story of flyers as a play called Flare Path, during the time he served in the Royal Air Force as a tail gunner. Asquith directed the successful West End run of that play during the war and Rattigan used it as the starting point for his screenplay of The Way To The Stars, released as the war was ending a couple of years later. Producer Antone De Grunwald contributed to the story, now centering on two English flyers prior to the entry of the Yanks, and on the twist the story takes once the Americans arrive to take over both the airfield and the girls.

The real strength of the film is that it’s a war film without a war. There are no battlefield heroics, and outside of planes taking off and landing, or a couple of dashes to the air raid shelters, there is no indication of who or why they fight. There are no long speeches about the hideous ‘Hun’ or the evils of fascism, or any extraneous or external distractions, just ordinary people ‘getting on with it’, under extraordinary circumstances. It could be the poster child for the 21st Century pithy catch phrase ‘Keep Calm and Carry On’. It also gives equal weight to the female experience, not just to the warriors on the frontline. The ordinary unspoken tension in the space between the men and women is multiplied enormously with what the war has wrought, bringing with it both overt destruction and quiet devastation.

Rattigan and Asquith also contrast the different approaches to interpersonal relationships between the reserved and ‘stitched up’ Brits and the more brash and open Yanks. When the Yanks arrive their extrovert ‘emotionalism’ serves as both counterpoint to the British detachment and a spark for change. Toddy had previously put up with being civil to the obnoxious and unctuous Miss Winterton (Joyce Carey), but after a taste of American directness she takes a stand, opening the door for the much put-upon niece Iris to do the same. Peter watches forlornly as the Yanks make a move on Iris, finally admitting his feeling regardless of the consequences.

The film is an affirmation of human connection, never needed so much as when people are under extreme stress. The risk of loss is a risk worth taking, especially when the stakes are so high. Rattigan’s strength also lies with the ambiguity he manages to conjure, ever so subtly suggesting a future may be possible for Toddy and Johnny, will he get a Dear John letter? Can Peter avoid being killed and finally propose to Iris? The lighter touches, played by the brilliant Stanley Holloway, Joyce Carey and Basil Radford, adds to the humanity of the piece, which has a deep affection for the plight of the ordinary population. The bittersweet ending was an indication of the everyday tragedies that the population had to endure at the time, and underlined the point of the film, that the war was felt deeply at the home front, just as on the front line.

One of the great features of the film is the superb ensemble cast, never a false note on screen, and it lends an authenticity to the production at every point. All are wonderful, but Rosamund John is the heart of the film, anchoring the piece and allowing the drama to unfold around her. Redgrave and Mills are very fine as the dramatic foils and several fine actors support them, even down to the small cameos of newcomers Trevor Howard and Jean Simmons, and Douglass Montgomery is very good as the sweetly earnest Johnny.

The Way To The Stars is simply one of the finest British WWII films ever made. It has a clarity and humanity that shows ordinary life and love in such a memorable and poetic way, a credit to the upper-class creators, and a reminder that the horrors of the war were no respecters of class. The Yanks didn’t get the poetry of the film (the title was a literary reference to a Virgil quote - "...young courage is the way to the stars") at the time and the film was renamed Johnny In The Clouds upon its American release, but stiffed there anyway. Their loss, it stands as a timeless classic of the type and essential viewing. 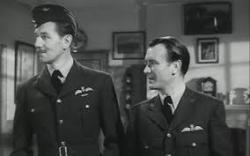 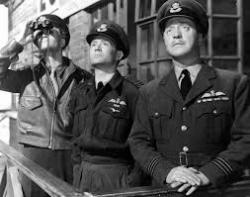 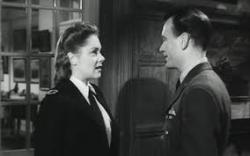 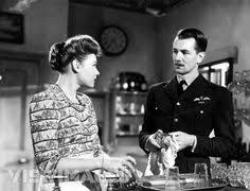 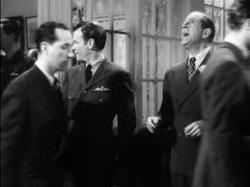 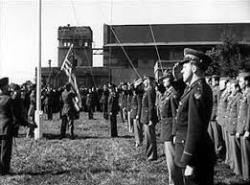