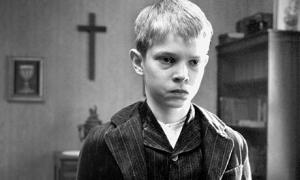 "And I don't believe that children are innocent. In fact, no one seriously believes that. Just go to a playground and watch the kids playing in the sandbox! The romantic notion of the sweet child is simply the parents projecting their own wishes." ~ Michael Haneke

After the curious sideways misstep of re-filming his 1997 film Funny Games in English, writer/director Michael Haneke moves to an entirely different setting altogether with The White Ribbon and it may prove to be his crowning glory. The familiar Haneke concerns are present, the struggle of the internal and the impact of the external, and that strange grey country where they meet is where he fixes his gaze. His visual stylistic tropes are given full expression, the lingering long shot where we know the sense of what’s unfolding we just don’t get to see it in intimate detail, so we fill in the space ourselves. Shots that conceal more than they reveal but force us to think actively about what’s missing rather than passively accept what’s shown.

The White Ribbon is set in a tiny Northern Protestant village in Germany, just prior to the First World War. Haneke starts his tale by admitting what he tells may not all be true, a way of saying that no one person is privy to all the facts, add to that the level of innuendo and gossip that’s part of small town life and we arrive at a frustratingly inconclusive and unresolved place. Haneke seems to revel in the not knowing, and he is not afraid to take us along for the ride, and an unsettling and bumpy ride it is, to paraphrase Christopher Koch, life in a German village in the early part of the 20th century carried with it a fine pitch of dread.

Haneke uses narration as his device of giving information, by an old man remembering the village where he was a schoolteacher. From the outset, we are in the hands of an old man’s memories, which should give us reason to be wary. The first portentous event he relates is the horse riding accident that befalls the Doctor. A pillar of the establishment, brought down by an anarchist’s wire. A sawmill accident soon sees a farmer’s wife killed, with the family looking for someone to blame. The sons fix on the Steward who runs the Baron’s property, but the Farmer feels helpless to act as it would jeopardise their already meagre income. These are almost feudal times and the Baron is untouchable. Such is the price of serfdom. The Baron’s son is later abused by unknown assailants and suspicion and innuendo run rife.

Amidst this penumbra of malice we have the one ray of hope in the love the teacher (Christian Friedel) finds with Eva,(Leonie Benesch) nanny to the Baron’s children. It plays a sweet and understated counterpoint to the nascent violence that permeates the heart of the film. Events unfold in telling vignettes, a boy learns what death means and realises his mother is not coming back from ‘holiday’ after all, or a canary is killed by a pair of scissors and laid on the Pastor’s desk. Life is spare and difficult, and only money offers an escape route out of the oppressive malevolence, and the Baroness eventually takes it, taking her son Sigi, who bloomed on holiday under the support of her Italian suitor, with her. The teacher pursues his chaste fiancée, who was sacked capriciously by the Baron, and he dreams of going into his father’s tailoring business. The Midwife realises there’s no place for her or her son in the Doctor’s (her lover) affections and goes off to tell the police what she knows of her son’s ordeal. She vanishes as does the Doctor and his children. War is declared and everything is about to change, loose ends abound.

Part of the controversy around this film is the statement early in the narration that this story would, more or less, help explain the future events in Germany. I doubt Haneke felt he was outlining reasons for the rise of National Socialism, but what he delivers, if you will, is fascism in microcosm. There are certainly clues about the fertile ground the culture provided for subsequent events. The village children behave as a pack or mob, and the teacher’s suspicions for some of the nasty events settles on them. The group appear uniform and are taught the value of conformity, control and rules. Certainly, difference in the form of Sigi, the Baron’s long haired son and Karli, the retarded son of the midwife, is punished. When the teacher (the one good man) raises the possibility of the children’s culpability with the Pastor (the institutional status quo), he is threatened with public denunciation. The Pastor is mostly found lecturing the children on the virtues of order, to guard against chaos, particularly that from within.

The White Ribbon of the title is a symbol of purity, tied to the children after various indiscretions, reminding them that purity is to be cherished and striven for. Another symbol of institutional strength, the Doctor, is seen to be corrupt and venal, succumbing to temptation and a life of hypocrisy. Haneke is once again putting seemingly decent, upright people under pressure from outside forces to test their moral mettle. A pet theme of his seems to be that rules and ritual can be a bulwark against rips in the social fabric to some extent, but when those threats come from within, from the nature of man, they are useless. Pointedly, Haneke lingers over all the wording of the Lord’s Prayer, reminding us of the wish to be ‘delivered from evil’. How are we to be delivered from the evil within? Western culture is primed to think in terms of messiah/saviour paradigms, be it a middle ages Knight or a gunslinger in the old west. Witness the recent events in the US and the fervour that greeted Obama’s election. No less a personage than the noted political analyst Beyonce breathlessly declared ‘He’s the one’. The American right were saying the same thing 8 years later when Donald Trump emerged from the slime. Unfortunately, for the Germans their Dark Messiah arrived in time to exploit the national neuroses over post WW1 traumas, tying a different kind of ribbon to their arms whilst spouting purity of a racial kind, and led them not to the Aryan promised land.

Haneke films his tale in luminous black and white, and Christian Berger’s stunning cinematography is both austere and elegant, the feeling evoked is one of timelessness. The performances are uniformly excellent, the children in particular strong and convincing and worthy of a cinematic tradition stretching back beyond Truffaut’s 400 Blows to Clement’s Forbidden Games. I think in time this film will take its place in the canon, worthy of Bresson or Bergman, whose Winter Light is surely referenced in the scene where the Doctor tells the midwife what he really thinks of her. The White Ribbon is a lingering and haunting film in all ways.