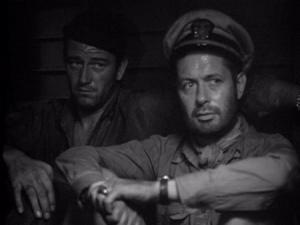 They Were Expendable  could have been an exercise in military hagiography of the type John Ford would lapse into in later years, but because of the influence on Ford of the man whose story it tells, Commander John Bulkeley, it avoided the crass simplifications and gung-ho bravado that most Hollywood war films espoused. Ford could have made the film 2 years earlier, but decided to honour Bulkeley’s wishes and not make a ‘two-bit propaganda film’ with the attendant ‘Hollywood hero monkey-business’ cliches, so he decided to wait until the war ended and film it almost as a documentary re-enaction. Ford also wisely used ex-Navy men where possible, his star Robert Montgomery, his cinematographer Joe August, (Gregg Toland was unavailable) his screenwriter Frank Wead amongst them, adding authenicity at every level. Ford rose to the rank of Captain during his war service and was responsible for getting footage at the Battle of Midway as well as of the D-Day landings, his experience adding to his already significant filmic ‘auctoritas’. This then was the atmosphere that Ford wanted to capture, a gritty realism of men doing a job of work, without the triumphalism of a conquering power that might even have been forgivable in late 1945.

Ford invests the opening with a certain gravitas by using a title card that includes ‘In The Year Of Our Lord’ making it clear this is at once an historical and important document belonging to its time, and further by implying tacitly that the participants were doing God’s work. This speaks to Ford’s championing of conservative values, family and the flag, and the film treats the groups of men as surrogate families, showing the sense of loss and the strains on the ties that bind. The opening shots are of a series of PT boats doing excercises in late 1941, trying to impress the watching big brass with their versatility, operated by Lt Brickley (Montgomery) and Lt ‘Rusty’ Ryan (John Wayne). Rusty is frustrated that the PT boats are not taken seriously and longs to transfer to a destroyer, Brickley urges restraint. A farewell for the unit Doc (Jack Pennick) is held on the day the Japanese bomb Pearl Harbour and ‘Boats’ Mulcahey (Ward Bond) delivers a nice speech about the older soldiers and their responsibility to the younger generations coming through, a theme that gets a couple of airings in the course of the narrative.

The PT boats are relegated to messenger duty and Rusty remains frustrated, the only action they see is in avoiding and engaging enemy planes that strike their base and smash it to bits. Brickley complains to his superior Gen Martin (Jack Holt, father of Tim) and is given the key speech of the film, that of the necessity of team playing, of sacrificing when asked so that "somebody else hits the home run, our job is to lay down that sacrifice, that’s what we’re trained for and that’s what we’ll do."  Brickley takes the advice and treads a fine line with keeping his men motivated despite their frustrations and maintaining his own cool.

Rusty misses out on a mission after taking a schrapnel hit and is nursed back to health by Lt Sandy Davys (Donna Reed). A romance blossoms that is both understated and ultimately unresolved as Sandy ends up being left on Bataan prior to it falling into enemy hands. Importantly the film treats her as an equal, that is a ‘professional’ doing her job and not complaining. no matter the hardships. There is a quintessential Fordian ritual scene, this time a shared meal where Sandy is invited to dine with the main corps, and Ford shoots it with reverence and humility for the touching moment of calm it represents to the men, sentimentalising it, but in a way that underscores not undermines the scene. Rusty ends up on the end of a telephone with no way to know if they’ll see each other again. The key job of work arrives in the shape of helping sneak Gen McArthur out of the region so command can be set up in Australia, and the one note of overt militarism is in the handling of the brief scenes involving this.

Ford obviously was alluding to the fact that retreat was not the end, but it is an awkward tone in the face of the rest of the film. The group struggle on through many scuffles and problems, but the enemy remains invisible in this film, the focus never moving from the travails and dedication of the enlisted men and women. Ultimately Brickley and Rusty are ordered to Australia as well, and are faced with having to leave their men who are seconded into the land forces, sailors without boats, part of a theme of the ‘glory of defeat’ and of the meaning and dignity that can be found in duty and sacrifice. The last shot is of the final US plane to leave the region as the weary remnants march on, awaiting the horrors of the next 2 years of Japanese domination. An unnecessary card appears on screen saying ‘We Shall Return’, given this was post Hiroshima and Nagasaki it would be redundant in the extreme and an odd note to end on.

Ford and Joe August shot the film without the standard lighting reflectors, giving the film a monochrome look, less sharp and glossy and more real in an oddly surreal way. In combination with the decidedly un-Hollywood lead performance from Robert Montgomery, a brilliant exercise in ‘method’ acting years before it became the rage, a connective reality was achieved that enabled Ford to create a canvas of subtle and nuanced depths. John Wayne produced a performance to be proud of, his strength and solidity giving real weight to the part. Russell Simpson, a Ford regular has a nice turn as an old shipwright and Donna Reed is luminous as Sandy, a lovely and thoughtful portrayal. The film was mildly successful upon release, its harking back to US setbacks at the beginning of the Pacific war being out of touch with the mood of a post-war victorious public. It fared better in reaction and public consciousness in the UK where it found many champions who recognised its restraint, taste and respectful documentation of an extreme situation which ordinary people faced with resolve and courage. Admiral Bulkeley (the real life Brickley) who became a friend of Ford’s  was told Ford intended it to be a ‘documentary’ and replied "it is a documentary, but with good actors."  No higher compliment?

NB. One sour footnote was that during filming a scene involving Montgomery and Wayne saluting a General, which was stopped several times by an increasingly irrate Ford. Finally Ford blew his top and yelled at Wayne, "Can’t you manage a salute that looks as though you’ve been in the service?"  Wayne, who idolised Ford and who was also heavily criticised in some sections of Hollywood because he did not serve in the forces, stormed off set for the only time in his life, and Montgomery, who thought it "outrageous"  fronted Ford and said "never speak to someone like that again."  Ford, an unreconstructed bully at times, apparently broke down crying. He continued to bully and belittle actors for the rest of his distinguished career though. 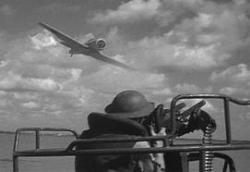 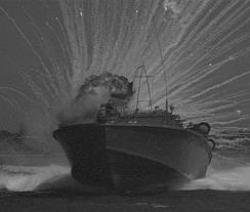 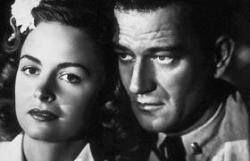 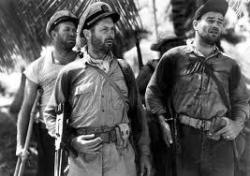 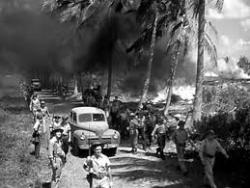 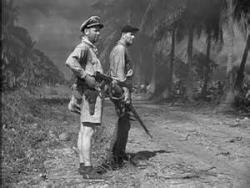