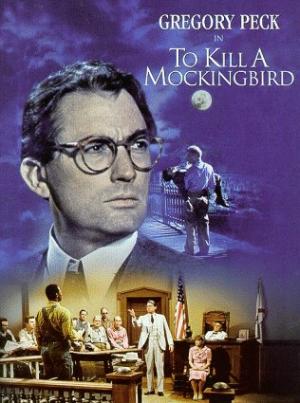 To Kill a Mockingbird

It’s been said that everyone has at least one book inside them, and in Harper Lee’s case she showed scant regard for the aphorism by having her one and only novel win a Pulitzer Prize. The book was wildly successful but Hollywood was not falling over itself to make the film and several studios had passed, as director Robert Mulligan said, no one wanted to make a film about ‘a middle-aged lawyer with two kids, no romance, no violence and no action’. Producer Alan Pakula, himself to go on to a distinguished directing career embraced the challenge and crucially cast Gregory Peck in the pivotal role of Atticus Finch and signed Southerner Horton Foote to do the adaptation. The screenplay was only minimally different to the novel and Harper Lee herself said “I think it is one of the best translations of a book to film ever made”. Foote wanted to capture the ‘talismanic’ meaning of childhood that we all tend to attach in later life to earlier events, and it’s through this prism that we view racism in America and the value of family in depression era Alabama.

The eye-catching opening title sequence sets the tone, the unpacking of childhood memories from an old box of assorted oddities, a watch, some dolls, a knife, marbles et al, as a child’s crayons sketches the name of the film, shot in crisp black and white. Elmer Bernstein’s lovely score, with resonances of nursery rhyme’s soon flowers to a full score of southern gothic-romance proportions, and is a superbly judged companion piece for the visually lyrical opening. A series of vignette’s follows where we meet the younger self of the voice-over narrator, Scout Finch, the adult voice is an un-credited Kim Stanley and the child is played by Mary Badham. Scout is a tomboy, playing rough with brother Jem (Phillip Alford) and giving a hard time to new kid in town Dill (John Megna). The children’s world is anchored by the solidity of their lawyer father Atticus, who trusts them enough to let them roam the boundaries of their own experiences, confident that love and support awaits at home them if they fall into trouble. The children speculate about wild rumours of a ‘maniac’ in the Radley’s dark house nearby, and create all manner of imaginary monsters within. On an excursion into the yard Jem gets caught on the wire and loses his pants, he goes back for them and finds them folded and ready for him, a foreshadowing odf a ‘kindler and gentler’ monster.

Atticus takes a job to defend Tom Robinson (Brock Peters), a black man accused of raping Mayella Ewing, a white woman, and the trial divides the town. The father of the girl involved Yule (James Anderson) threatens Atticus and before the trial a lynch mob of white locals assembles outside the gaol where Atticus is standing guard for the night. The children arrive and show the disarming power of innocence, forcing the cooling mob to review their intentions in light of the children’s presence. The trial proceeds and tellingly the children sit in the all-black gallery and watch their father defend an obviously innocent man. Peck is magnificent in these scenes and sets the benchmark in a performance of dignity and restraint in a fight he instinctively knows he will lose, even though intellectually he knows he’s in the right. The girl has almost certainly been molested by her father, a common occurrence at the time in poor rural communities and Atticus himself calls her a ‘victim of poverty and ignorance’, subtly throwing the burden of guilt back on a society that leaves it’s vulnerable open to this kind of abuse and exploitation. Peck’s performance is more than matched by Brock Peters as Tom, the quiet black man who relates what really happened, that Mayella (Collin Wilcox) attempted to seduce him, her nascent sexuality looking for an outlet. The jury brings down the only verdict you’d expect from an all white jury in Alabama in the first half of the 20th century and Tom is killed a short time later when he attempts to escape from custody. Scout and Jem get life back to a degree of normality but when, Brother’s Grimm like, they are crossing the woods a dark figure jumps them intent on killing them, only to be engaged in a struggle by a mysterious figure who kills the assailant and takes the battered body of Jem home to recover. The protector turns out to be Boo Radley (Robert Duvall), and the would-be killer Bob Ewing.

The film is set up as a fairy tale, where the morals of good versus evil are distilled in such a way for children to absorb and learn life lessons while being entertained. ‘To Kill A Mockingbird’ functions perfectly at this level, the monster in the woods, notionally Boo Radley, is ‘fear itself’, the thing the narrator mentions at the beginning saying ’ we had been recently told ‘we have nothing to fear except fear itself’, Roosevelt’s New Deal manifesto of belief for the struggling country. Boo turns out to be a benign monster, the real threat lies inside the castle walls with Ewell and the racism that pervades society, the fear of the other. Atticus has demonstrated his maxim of ‘never fight back, no matter the provocation’, Yule spits in his face and he maintains his coll, and Jem watches and understands it’s a stronger man who doesn’t reduce himself to his ignorant enemy’s level. The maxim ’it’s a sin to kill a mockingbird’ that Atticus tells to the children finds resonance in Tom’s killing, a black man who did no harm to his fellow man, and Atticus allows the scales of justice to balance by tacitly agreeing to the Sheriff’s summation of Yule’s killing and letting Boo go free, at this point he’s not a lawyer, he’s a father.

Harper Lee never wrote another novel, and this combined with the fact she spent the next few years helping her childhood friend Truman Capote (who the character Dill was based on) research his seminal non-fiction novel ‘In Cold Blood’ led to rumours that Capote substantially wrote the book for her. Capote himself wrote to an Aunt privately that he was shown a copy of Harper’s book a year prior to publication and found it ‘quite good’, What is certain is that Lee said she never wrote another novel as she had no more to say and the pull of fame and fortune meant nothing to a small town girl when balanced against her innate fear of public rejection. Capote fell out with his friend, jealous of her winning a Pulitzer, which he never did although he thought he deserved one, reason enough for him to claim authorship you’d think of the prize winning text, but he never did. Harper Lee captured her childhood world perfectly, and Horton Foote transferred it seamlessly to the screen. Peck, who deservedly won the Academy Award for best actor, created a figure for the ages on screen, reminding America at a time of great turmoil in Civil Rights politics of the inherent goodness of many white liberal’s supporting the struggle of Dr Martin Luther King Jr and others. America in 1961 stood at a crossroads, and the tide in favour of equality was moving inexorably in the direction of fairness, helped no doubt by the simple portrayal of women like Calpurnia (Estelle Evans), the black housekeeper who looks after the Finch children and the quiet dignity of the black community who witness the efforts of Atticus to defend Tom, and who stand as one in a beautifully weighed tribute as Atticus exits the court, defeated but in the right. The white community are a mixed lot, but it is clear that bigotry is a product of ignorance, and Atticus favours education as a way to enlightenment, again placing the solution within the purview of the Government and it’s choice to invest in the future of the nation’s children by resourcing their schools.

Robert Mulligan directs with an un-fussy eye, cutting and moving where needed and keeping the narrative clear and focused, no camera histrionics here. The film became an instant classic, speaking to America’s past in a voice redolent with meaning for the time it was made, with a moral and gravitas that ensured it will endure for many generations of Scout’s and Jem’s to come 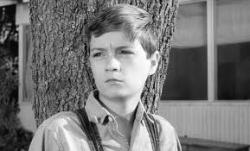 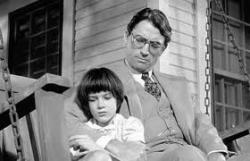 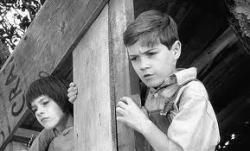 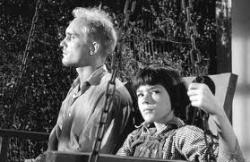 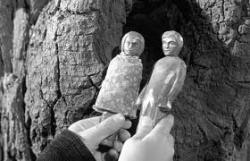