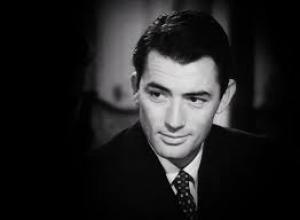 "Inside of all the makeup and the character and makeup, it's you, and I think that's what the audience is really interested in... you, how you're going to cope with the situation, the obstacles, the troubles that the writer put in front of you." ~ Gregory Peck

Gregory Peck was set firmly in the tradition of classic, masculine Hollywood movie stardom, where men such as Clark Gable, Spencer Tracy and James Stewart seemed to be playing a version of themselves every time they appeared on screen. This, of course, was a conceit but the era of stars stretching their thespian skills and playing against type was one that came after Brando and Clift re-invented the game for the American male actor. In truth, Peck was a virtual contemporary of Brando’s, only making his debut a bare 5 years earlier, but he always seemed to belong to the previous generation, and in Hollywood perception is everything.

A native Californian, Peck fell in love with acting at University and soon crossed the continent as a young man and tried his luck on Broadway, unable to serve in the military because of a bad back. After a couple of years in New York, he won enough notice to return to L.A. to work at RKO and then as a contract player at Fox.

Peck had no apprenticeship in film support roles at all, he was a leading man from his first role in an unremarkable Jacques Tourneur WWII film from 1944 called Days of Glory, but with his second role in John M. Stahl’s The Keys of the Kingdom he was nominated for an Academy Award for Best Actor. That film set his screen persona in rock, a suitable metaphor for such a solid, composed screen presence, and despite him trying to branch out with a bad boy role in King Vidor’s Duel In The Sun, but the image didn’t stick and soon Peck was fulfilling expectations with a movie-going public that loved him from day one.

A succession of quality roles came Peck’s way after his nomination, notably in two films for Alfred Hitchcock, firstly Spellbound, opposite Ingrid Bergman where the pair became lovers in real life, and in The Paradine Case, with a first-class ensemble cast featuring Charles Laughton and Ethyl Barrymore.  During this period, he also worked for Clarence Brown in The Yearling, and for Elia Kazan in Gentleman’s Agreement, and both the films garnered further Academy Award nominations. Peck’s real life liberal credentials often chimed with these humanist, liberal roles, and even though he denounced HUAC during the McCarthy years he suffered no ill-effects on his career.

Director Henry King proved to be a key collaborator for Peck during the next phase of his career, providing A-grade roles in Twelve O’Clock High, (another Oscar nominated performance and a win with the New York Film Critics Awards), The Snows of Kilimanjaro and in one of the roles of his career, Johnny Ringo in The Gunfighter. King and Peck were also caught up in the 1950’s ‘sword and sandal’ craze, producing David and Bathsheba for Daryl F. Zanuck, an odd non-spectacle driven biblical epic opposite Susan Hayward.

Peck was on much surer ground in Yellow Sky, with Richard Widmark, a solid western for director William A. Wellman, and a couple of rousing old time adventure yarns for veteran Raoul Walsh, Captain Horatio Hornblower, and The World In His Arms, with Ann Blyth and Anthony Quinn. William Wyler cast Peck opposite newcomer Audrey Hepburn in the magical fluff of Roman Holiday, one of his enduring roles, and he continued to travel for a succession of interesting roles. Robert Parrish filmed a war story in Sri Lanka called The Purple Plain and in England Ronald Neame used him to great effect in the quirky, The Million Pound Bank Note.

Unlike other stars of the era, Peck decided to focus on projects that interested him, rather than continue to be fed through the studio machinery, so he worked independently for different studios and hand-picked his own projects. He worked for John Huston on his adaptation of Moby Dick and displayed a touch for comedy in Vincente Minelli’s Designing Women opposite Lauren Bacall. He returned to the western genre in the late 50’s with Henry King again on The Bravados and with William Wyler for The Big Country, a film Peck also co-produced with Wyler. King again directed Peck, this time as F. Scott Fitzgerald, and Deborah Kerr as Sheilah Graham in Beloved Infidel and the actor headed to Melbourne to film On The Beach, a classic Cold War tale about nuclear holocaust with Fred Astaire and Ava Gardner.

British director J. Lee Thompson cast Peck in his next two films, firstly in the hit WWII blockbuster Guns of Navarone, with Anthony Quinn and David Niven along for the ride, and then with the excellent thriller/noir, Cape Fear, opposite Robert Mitchum – they both took smaller supporting roles in Martin Scorsese’s brutal 1990’s re-make. In 1962 Peck got the role of his career in Robert Mulligan’s To Kill a Mockingbird, an adaptation of Harper Lee’s masterful novel, as small town lawyer Atticus Finch, a role he will forever be associated with. As a reward for his fine performance he finally won an Academy Award for best Actor, and a Golden Globe for luck.

After that career high point Peck worked solidly in features for another 15 years, with mixed results. He starred in a couple of typical 1960’s spy-type thrillers in Mirage for Edward Dymytrk and Arabesque for Stanley Donen and opposite Sophia Loren. Peck trotted out a couple of western’s in a re-teaming with Robert Mulligan for the gritty and moody, The Stalking Moon, and twice with J. Lee Thompson for his western McKenna’s Gold, and spy drama called The Chairman.

Peck was still solid box-office going in to the 1970’s, starring for John Sturges in the up-to-the-minute space drama of Marooned and in the John Frankenheimer drama, I Walk The Line. The New Hollywood was busy inventing new stars and Peck found a couple of good late career roles in The Omen and in The Boys from Brazil, finally playing a villain opposite Laurence Olivier’s Nazi hunter. Peck also achieved an ambition to play Douglas MacArthur in Joseph Sargent’s MacArthur, a character diametrically opposed to Peck’s own persona – MacArthur was a racist, a bigot and a fascist reactionary. Both roles in The Boys from Brazil and MacArthur earned Golden Globe nominations for Peck.

In later years Gregory Peck took to touring his own story around the playhouses of the world, a reflection of his enduring love for live theatre. He was one of the biggest stars in a classic era of American film, and while possibly his inherent decency and movie-star looks ensured success, his dedication to his craft and utter authority in his best roles should not be underestimated. Peck oozed effortless class, and his patrician presence graced many a fine film, some perfect time capsules, some perfectly timeless.