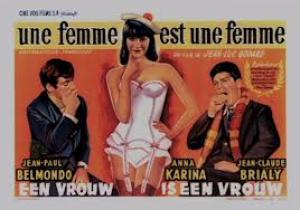 "The cinema is not an art which films life: the cinema is something between art and life. Unlike painting and literature, the cinema both gives to life and takes from it, and I try to render this concept in my films. Literature and painting both exist as art from the very start; the cinema doesn't".
-        Jean Luc Godard

Jean-Luc Godard's playful period of deconstructing familiar cinematic tropes continued with this burst of colour and movement involving another eternal love triangle. It's all at once parody and satire, a comedy and a social drama, and all wrapped up in Raoul Coutard's lovely photography and Michel Le Grande's romantic-lite musical themes.  Godard is at his most energetic with this film, with a larger budget and confidence as a result of the success of Breathless  that probably helped, as did the 'pause for thought' moment the scandal involving a delayed release of his follow up film Le Petit Soldat,  later to suffer a critical and public mauling. If Godard felt he had to prove himself all over again he would do it by even bolder stokes on his cinematic canvas, for every deconstructionist moment in Breathless  there would be three in this film. He cast his beautiful wife Anna Karina in the lead, as he had done in Le Petit Soldat,  and employed Jean Paul Belmondo again, now a huge star, and Claude Chabrol regular Jean Claude Brialy as the third character in another eternal love triangle. Into this stew Godard throws everything and the kitchen sink, but at the heart of the dilemma he posits his own bleak take on relationships "It's because they are in love that everything will go wrong".

Angela (Anna Karina) is a stripper in a seedy Paris club, she's married to Émile (Jean Claude Brialy) and she wants to have a baby. Claude does not, and soon Anna is talking of looking for an alternative, "I'll pick the first guy I meet",  she says at one point, and then two cops enter the room to prove her wrong. Taking her at her word that she'll use another man, Émile suggests his best friend Alfred (Jean Paul Belmondo) do the job. This throws up one of Godard's evergreen themes, the idea that if you love someone you will do anything at all to make them happy, even if that thing makes you unhappy. While not being thrilled that Alfred would fill the breach so to speak, Émile would be content that Angela gets what she wants. The rest of the action is taken up in the dance between the three and an eventual ambiguous rapproachment between the married couple.

'Ambiguity rules' is the tenor to most of the film, in fact Godard doesn't let any situation play out at only one level, like the modes he refers to overtly and obliquely in a cinematic sense, the entire dialogue is a word play in itself, at one point Angela and Émile even start to converse by a series of book jacket semaphore! Characters lurch into faux musical numbers at the drop of a hat, dramaturge or Demy, Tashlin or truth? we're never quite certain. "The truth should look different from a lie",  Angela says. Alfred gets impatient "because 'Breathless' is on TV tonight",  as another self referential 4th wall demolition device drops, he later bumps into actress Jeanne Moreau and asks her how Jules et Jim  is going? "Moderato",  she replies as the in-jokes pile up on one another like cars around the Arc de Triumph. Angela pulls off a sight gag about Indo-China, intoning "All the women to the firing squad",  and 'colonial diplomacy' is referenced in a black skinned stripper's routine, Algeria tacit, no stone unturned. Angela sings to a jaunty tune, "No one is more unhappy than me", as Godard-ian disassociation underlines everything.

Godard places the narrative, such as it is, in the framework of one of the most important decisions in a woman's life, the question of when to have a first child, or to have one at all?  That he made the woman a stripper is no accident, it's also a comment on the objectification of women by men, the threat that a change to her body by having a baby represents, and the idea of the responsibility it engenders, rather than her body as simple use for pleasure. The difference between men and women is a rich and fertile vein that Godard often came back too, and here it's stated overtly, rather than obliquely, "modern women who try to imitate men are stupid",  says Émile/Godard, and set in an era of nascent feminism, when western women were about to gain some control over their fertility with the pill, this is a resonant phrase.

The Pill was ratified for use in 1960 in the USA, West German's were using it in 1961, but French women not legally until 1967, the legacy of a more conservative government and Catholic pressure. When Angela is about to have sex with Émile at the end of the film, she crosses herself in prayer, and after the deed she does so again, an ironic twist from Godard. She then replies to Émile, who said "damn you",  with, "not damn me, a dame me".  It's also no accident that the men conspire against her, and far from being acidic rivals in wooing her to bed, they both collude to confound and confuse her, or to cheat on her with other women. Sexual politics a la mode.

The performers are warm and engaging, Karina is luminous, she won a Best Actress at Berlin for the role, but it's Godard's show. The success of Une Femme est Une Femme  mapped a path to his boldest period and richest of filmmaking in a 'mainstream' sense, and again the term is relative, but that road to the glories of Vivre Sa Vie,  Le Mepris,  Bande A Parte  and Pierrot Le Fou  lay just ahead, before Godard took a sharp left turn in the late '60's and dispensed with the road map all together.