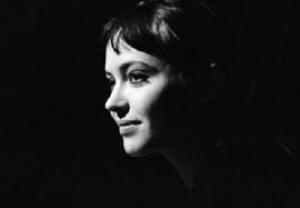 “Jean-Luc gave me a gift to play all of those parts. It was like Pygmalion, you know? I was Eliza Doolittle and he was the teacher.” ~ Anna Karina

Born Hanne Karin Bayer in Denmark in the early part of WWII, and christened Anna Karina by Coco Chanel in Paris in the late 1950’s, she survived a loveless childhood and homelessness on the streets of the French capital to become one of the gorgeous faces of the Swinging Sixties. Karina worked as a model before being spotted in an advertisement for Palmolive by Cahiers du Cinéma critic Jean-Luc Godard, who offered her a small part in his debut feature, Breathless, but she turned him down. Godard persisted and cast her in the lead in his follow up, Le Petit Soldat, a film addressing the Algerian situation and controversial enough that it was not released for over two years. During the filming of Le Petit Soldat they became lovers and moved in together.  Eager to work, Karina made a light comedy for Michel Deville, of which Godard was contemptuous, but seeing her in it he realised she was capable of taking the lead in his next work and their first masterpiece together, Une Femme Est Une Femme. The film  won the young woman Best Actress at the Berlin Film Festival, proof of her arrival and potential.

They followed this Succès d'estime the following year with another masterwork, the haunting and tender, Vivre Sa Vie, one of Karina’s most enduring achievements, especially since the marriage was so tempestuous. In the interim between the films Karina became pregnant and the couple married. Often left to fend for herself by her enigmatic and diffident husband, she agreed to star in Le Soleil dans l’oeil for Jacques Bourdon, and promptly had an affair with her leading man. In the eruption that followed Godard destroyed all her possessions and she attempted suicide, a split was announced and then, they were reconciled and making another masterpiece, Vivre Sa Vie. In a personal tragedy she also lost her baby in a miscarriage which damaged her emotionally and led Godard to withdraw into his work further. Though going through personal trauma, the couple made cameos in Agnes Varda’s stunning Cleo From 5 to 7, an indication of their status as the hot couple of the Nouvelle Vague (imagine how that went down with the prickly and mercurial Godard), and she made an English language comedy in the UK (opposite Bob Monkhouse!) playing a, what else, French maid. Karina struggled to find other directors as good as her husband all her career, but in 1964 she worked with former enfant terrible, Roger Vadim, in a talented ensemble piece, Vadim’s version of La Ronde - but Vadim’s attentions were clearly on American import and his new love interest, Jane Fonda.

She also made the wonderful Bande à part same year with Godard, possibly their most iconic collaboration, and an astonishing feat given the personal circumstances surrounding its making. During pre-production Karina felt abandoned and attempted suicide again, triggering Godard to admit her to a mental institution. She realised many of her issues stemmed from the death of her baby, and Godard’s aloofness. He started filming on Bande à part 3 days after she left the mental hospital. Karina credits the film with saving her life,  “I had come out of hospital. It was a painful moment. I had lost the taste for life at that time. “In the meantime, I had lost weight, I wasn’t doing well, neither in my head nor in my body. It’s true: the film saved my life. I had no more desire to live. I was doing very, very badly. This film saved my life.” The couple patched it up again for a short period of time, but Karina accepted a role in Le Voleur de Tibidabo and had an affair with the director and star, Maurice Ronet and they filed for divorce.

Even though their marriage had ended, Godard turned to his muse to star in his sci-fi classic, Alphaville. Apparently hoping to win her back during the filming. That film indicated that there was still a spark between them relations were mostly cordial it seems, but that all ended with the nightmare production of their final fully-fledged masterpiece, the challenging-in-every-way, Pierrot Le Fou. Godard used the filming to improvise several bitter scenes of a relationship in the process of disintegrating, until the gruesome finale where the male partner, or Godard substitute blows off his own head. The co-dependant behaviour continued twice more, with a Godard polemic, Made in USA and finally in a vignette for a multi-star, multi-director compendium film, The Oldest Profession, both from 1966. After that the pair barely spoke again and Karina forged a career as an actress and singer that lasted another 50 years, though she did say, “He was, and will remain, the greatest love of my life.”

She was a bona-fide movie star at this point, and was also being taken seriously as an actress, evidenced by her being cast in A-list projects by Jacques Rivette in La Religieuse, and by Luchino Visconti in his Camus adaptation, The Stranger, opposite Marcello Mastroianni. The Rivette was sufficiently controversial it took several petitions from French intellectuals to get it released, and Karina drew favourable critiques for her efforts, following on a stage production directed by Rivette and produced by Godard some two years earlier. The late 60’s also saw a series on uneven films at the hands of noted director’s, amongst them the critical failure of Guy Green’s John Fowles adaptation The Magus, and J. Lee Thompson’s Before Winter Comes, opposite David Niven and Topol. She also worked with Tony Richardson (then going through his French fascination with La Moreau), in Laughter In The Dark, an ill-starred attempt to adapt Nabokov, and no less a Hollywood legend than George Cukor, when he took over a problematic film called Justine in 1969.

Anna Karina worked consistently throughout the 1970’s, occasionally scoring a box-office or critical hit, like Franco Brusati’s Bread and Chocolate and Rainer Werner Fassbinder’s Chinese Roulette. She even directed and produced her own film, one she wrote and starred in as well, Vivre ensemble, in 1972. She continued to appear in films into the 21st century but also diversified into writing novels, as well as maintaining a successful singing career, not bad for a homeless street waif.

Anna Karina was a breath of fresh air when she arrived almost fully-formed with Une Femme Est Une Femme, having neither the enigma of Jeanne Moreau or the raw sex of Brigitte Bardot. She occupied a space somewhere between a French Audrey Hepburn and a Julie Christie. Karina’s reputation will forever be tied to that of her former husband’s - In the 7 years they worked together, they spent 5 of them married to each other and made 7 feature films. In that same period Anna Karina made 14 films with other directors, but it is for her work in the Godard films that she joins the ranks of cinema’s immortals. He was her great love and she was his muse, their collaboration ranks with the Josef Von Sternberg/ Marlene Dietrich cycle, or even their 1960’s Italian contemporaries Michelangelo Antonioni/Monica Vitti. Karina was a more than capable actress who carved a small but perfect niche for herself, forever identified with an era, a woman for her time and an unlikely icon for the ages.