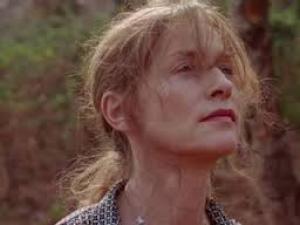 "Colonialism. The enforced spread of the rule of reason. But who is going to spread it among the colonizers?”
~ Anthony Burgess

Claire Denis essays a post-colonial mindset in Africa as white French farmers come to terms with a country (unidentified) that is no longer a minion of the republic and an indigenous population that has scant regard for old protocols that led to their marginalisation and exploitation. Denis spent her pre-teen years in Africa and has examined the fractured French relationship to the Dark Continent twice before in her debut Chocolat  in 1988 and in her masterful Beau Travail  in 1999. Denis enlisted Isabelle Huppert, the premiere actress of her generation, to play the central role in the piece and the waif-like redhead managed to magnificently carry the film on her petite shoulders, dominating the narrative from start to finish.

Maria (Isabelle Huppert) is the matriarch of a coffee plantation in a nameless African country going through the process of a post colonial power struggle. Maria has to deal with rebel insurgents who follow a local warlord known as The Boxer, as well as a dissolute husband, Andre (Christopher Lambert) who has gambled many of the plantations profits away, and a listless and disconnected son.  The coffee harvest needs to be finished and Maria attempts to hire some locals to do the job, contending with the reality of the boy soldiers and the shrinking white population caught in a lawless country n the brink of civil war.

Denis favours a fractured narrative style that jumps between events and time, forward and back, in a mosaic of vignettes that heightens the intense feeling of unease that envelops Maria like a shroud on her journey. It’s as if she carries the weight of the colonial legacy on her skinny legs, unwilling to bend to the inevitability of change, or acknowledge the level of enmity directed towards the white landowners, “these dirty whites, they don’t deserve this beautiful land”.  Maria knows no other strategy than to keep moving forward, her tenacity and unyielding spirit seems destined to collide with the reality of the dangers extant, an unstoppable force meeting an immoveable object. Denis sets up this expectation and then subverts it at many levels, by blurring the lines as to whose side anyone is on at any given time, by examining the nexus between loyalty and betrayal, and by slyly and tacitly questioning Maria’s single-minded motives.

Maria loves the country; it is the country her son was born in, “It is his country, he was born here, but it doesn’t like him”,  and struggles to see her family as illegitimate or unwelcome intruders. The child soldiers add a layer of chilling horror (Kony 2012 anyone?) to proceedings, as Maria’s quest takes on the tone and feel of an unrelenting nightmare, uncertainty piling upon uncertainty. Maria runs into the child soldier road blocks and is told, “Everybody pays”  in order to pass, and when she questions the scam she’s also told “It’s because of people like you that there is corruption”.  A subtle indictment of colonial exploitation is the half brother of Maria’s son, Jose, the product of Andre’s indiscreet liaison with the family’s black housekeeper, and a reminder of the complexity of the situation.

Claire Denis casts a dispassionate eye on the land and on the conundrum faced by each side of the racial divide as the cool, quasi reportage style manages to give an air of tragedy and loss that never dissipates. There is blame on both sides, and human beings stuck in the middle trying to live their lives, “everyone is entitled to their share”,  Maria is told by an accusing black voice sick of the whites “filling their bellies while we starve”.  Justice is a sword with two edges. Despite her efforts, the black rebel philosophy reduces Maria to "white material",  something transient and disposable typical of the inessential consumerist goods that the whites fill their houses with. There can be no greater condemnation than the inequalities of consumption that have led to a world where so few have so much, while so many have so little. The statement by a white friend, “you don’t want anyone taking what you have” takes on many layers of irony as Maria trudges on in her quixotic haze.

* A breathtaking stat in 2014 emerged that put global inequality into context, it estimated that the wealthiest 85 people in the world had the same net worth as the poorest 3.5 billion people!

Maria’s dilemma is that of a woman who fails to see why she should bend in the face of inevitable change, especially when change means the loss of the things that give her life meaning. If she’s had any common decency in her dealings with the black population it will count for little in the new order, and if she fights back she stoops to the level of the criminal rebels, opportunists who ride on the back of the moral argument and justice inherent in taking back their country. The two young men fathered by Andre represent the strange and uneasy cultural dichotomy as each lurch from one harrowing situation to another, both curiously the victims of accidents of birth.

The national wrench of the Algerian experience has left a gaping wound in French consciousness and any colonial examination needs to be viewed through this prism, still causing ripples of angst more than half a century later. Denis is acutely aware of the sensitivities involved as she looks at the dilemma through the eyes of a driven woman who has family as well as business issues, but these are trumped by the major issue of identity. Maria is representative of the white ‘invaders’ who have stayed so long they are in the nether world of being neither French nor native, and this more than anything compromises the long term ambitions she holds for herself and her conflicted and fractured family.

Denis controls the pace and tone of the film beautifully, creating an atmosphere of tension, walking a tight line but never lapsing into cheap horror or thriller tricks as the narrative unfolds with a deathless logic. The heart and soul of the film is the central performance from Isabelle Huppert, an actress so startlingly consistent she seems to have a sixth sense in choosing projects that few others have. Huppert’s haunting presence lends an almost ethereal tone to proceedings as she manages to evoke some kind of resilient ghost stalking the landscape, prodding and pricking both sides into self examination. It is a magnificent characterisation in a series of flawless roles by the finest actress in the modern era, bar none.

White Material  is a harrowing ride, a disturbing and yet beautiful essay on questions of identity and loss, of heartbreak and brutality, on the easy ugliness of man’s inhumanity to man. There is no easy answer to the question of how much damage the colonial powers did in their quest to exploit the resources of, or bring ‘civilisation’ to, primitive, third world countries, but the ripple effects make for fascinating viewing. White Material,  once seen never forgotten. 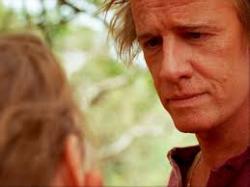