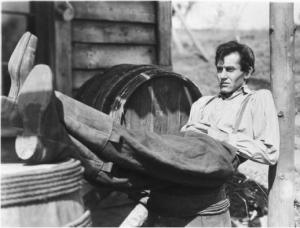 John Ford's evocative framing of Lincoln's early life came at a crucial  point in the political life of the nation and represents a timely reminder of the democratic values upon which the country was founded. In 1939 the world was in a whirlwind of change, having survived the great depression, where unemployment rates in the USA were in excess of 30%, the country was mired in an isolationism that saw America effectively abrogating it's international responsibilities. Ford was not unaware of the struggles in Europe and he supported the fight against the fascists in Spain and was also a life-long supporter of the Irish fight for independence via the IRA. Lamar Trotti wrote the insightful screenplay and again showed his deep sympathy with the ordinary people, having provided the writing for Ford's 'americana' pieces with Will Rogers. In Lincoln's story, given his actor brother's close association with portraying the President, Ford went to work on a subject close to his heart. If 'Stagecoach' was a plea for unity in the face of outside aggression, then 'Young Mr Lincoln' was a reminder that leadership based on sound principles and common sense never goes out of fashion.

Ford begins with a small community gathering who recognise in Abe Lincoln (Henry Fonda) a decency and dignity of purpose that warrants electoral support. The shy shopkeeper takes some law books in exchange for goods from a poor family and soon is entranced by the contents, which he distills to a simple formula, 'these are your rights, anything that takes them away is wrong'. Lincoln's ambition is fed by the pretty Ann (Pauline Moore) and there is a touching courtship scene which Ford then effortlessly blends into a scene of loss, it's a stunning and beautiful sequence and the sign of an artist at the top of his game. Ford's preferred method of work is worth commenting on here, as he never used storyboards unlike Hitchcock for instance. Ford improvised once on location, trusting his eye and instincts to find the right texture and camera angle. Hitchcock found the actual filming process dull, as he'd already made the film on paper, but Ford looked for inspiration and spontaneity once on location, and had enough ego and talent to live by his wits and trust he'd get the right result.

Lincoln relocates to Springfield and sets up as a lawyer, he becomes a popular local and moves easily among the common people at the 4th of July parade, and as a pie cooking contest judge at the fair. An incident at the fair between a couple of drunkard townsmen and some farm boys leads to a murder trial and Abe becomes the defense attorney. ford establishes Lincoln's common sense and decency simply and effectively, but still manages to have him set apart from the crowd, as if he's somehow marked for greatness, it's a delicate balance but one he pulls off. Ford's techniques for this including framing a seated and still Lincoln, pensive and shadowed, while chaos and confusion surrounds him in the courtroom. Ford seemed to be deliberately creating a real life version of the famous Lincoln memorial, and ultimately he moves to that exact reference at the end. Abe relates to the simple farm family, and their plight to his own experience, and movingly tells of the loss of his own mother, a substitute of a type he finds in the accused boy's mother. It's Trotti and ford's way of stating where Lincoln got his values and his motivation from, not from any 'theory' about law found in a book, but in the real utilitarian application of principles to help support a culture of value. Ford has some subtle touches, Lincoln playing 'Dixie' on his jaw harp, a gentle reminder that he requested that song be played after the South's defeat in the wrenching Civil War, and eloquent message of healing and of his eschewing triumphalism at a crucial point in history.

In Henry Fonda Ford found his ideal actor for this 'popular front' period, as Fonda's restraint and taste made the portrayal respectful, but not hagiographic, and suited Ford's tendency to sentiment, in the best sense of that overused word. They would work together 3 times in quick succession, in the colourful 'Drums Along The Mohawk' and in Steinbeck's superb response to the depression, 'The Grapes of Wrath'. Bert Glennon again shot the piece in beautiful black and white, giving full expression to Ford's painterly and poetic eye.

During the late '30's the effects of Roosevelt's New Deal politics had galvanised many leftist organisations into a 'popular front' similar to the umbrella leftist movement in France during the same period. Philip Dunne recalled ''Those that remember Rear Admiral Ford as a conservative in his later years, perhaps finding him guilty by association with his rightist friends, forget that in the 1930's he sailed with his political helm aport'. Ford certainly responded to the plight of the common man in this era, and even though this film is primarily about Lincoln, it's the light in which he shows the simple folk that are Lincoln's foundation and inspiration that resonates, the same people that Ma Joad speaks so evocatively about in Ford's masterpiece 'The Grapes of Wrath'.  Ford was chameleon enough to sculpt his vision to fit the times, even if his politics moved to the right after his War time service. The tragedy of Ford was that in every era he championed the notion of the family while he made a mess of his own home life. He eulogised this institution above all other's, it's the reason that the west was tamed in Ford's lexicon, to make it safe for these decent family values to flourish in what was once wilderness, that's Ford's west. Ford held the family up as the ideal, maybe to keep telling himself to try harder to live up to his cinematic model, and knowing always that his nature would see him fall short. Ford was a contemptuous and spiteful man, a poet trapped in a bully's persona, but it's the contradictions in the man that help make his art so compelling.