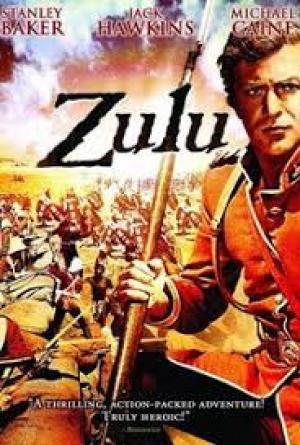 "But the whole point of the Sixties was that you had to take people as they were. If you came in with us you left your class, and colour, and religion behind, that was what the Sixties was all about." ~ Michael Caine

Stanley Baker and Cy Endfield had made 4 films together by the early 1960’s when they formed Diamond Films, and Zulu became their best-known production. Baker was in the vanguard of the growing presence of earthier, working class types in British cinema, an antidote to the gentle, middle class faces so prevalent at the time. Baker had come up the hard way, grinding years in Repertory Theatre in the post war environment, before small film roles led to bigger parts and broad success. By the time Baker became a producer he was one of the biggest stars in Britain. Endfield, by contrast, was an American emigre, having fled his home country because of the Hollywood Blacklist. Endfield was named before HUAC and became one of the more notable refugees to work in Europe, alongside Joseph Losey and Jules Dassin. The success of Zulu was greatly enhanced by the choice of the relatively unknown Michael Caine for the key role of Lieutenant Bromhill, an upper-class officer. Caine has always credited the fact that Enfield, as an American, had no in-built class prejudice in casting a working-class Cockney as a plummy toff. Caine pulled off the role so well he became a major star overnight, after a decade of treading the boards in Rep like Baker.

The genesis of the film was in Endfield’s reading an article on the Battle of Rorke’s Drift by John Prebble. Enfield wrote a screenplay based on the article and researched the Zulu point of view when they set up for a 3 month shoot on location in South Africa. Baker, a native Welshman, was attracted to the Welsh aspect of the key regiment involved in the unlikely defence against overwhelming odds. A native Zulu uprising against British colonial oppression occurred in 1879 in Isandlwana, and in the aftermath 4,000 Zulu warriors marched on a small British settlement at Rorke’s Drift, manned by some 150 soldiers of the Queen. Britain in 1964 was experiencing a lessening of influence, adjusting to life after global dominance, and Carnaby Street/Swinging London were about to embrace a nostalgia for the regalia and accoutrements of Imperial Britain, so there was a national mood to look further back than the recent war with a rose tinted hue in order to ameliorate the sudden state of global irrelevance.

A Swedish Missionary (Jack Hawkins) and his daughter attend a Zulu wedding when the Zulu King is informed of a great victory over the British at Isandlwana. The news of the defeat and the fact that the large Zulu force is now approaching them reaches the British outpost at Rorke’s Drift and command is assumed by Lieutenant Chard (Stanley Baker) who marshals his relatively small force to defend the position. The Regiment prepares as best as it can and its soon surrounded by a well-armed and aggressive army of natives, intent on continuing its rout of the Colonialists. Chard is assisted by Lieutenant Bromhill (Michael Caine) in organizing the defence but they clash over tactics and some jealousies arise. The Zulu’s attack and retreat in several waves but the overwhelming numerical advantage fails to complete a quick victory.

The film avoids any overt criticism of Colonialism as a policy or its effects on native populations and instead seeks to depict the courage of the regiment who managed to survive against the odds, winning 11 Victoria Crosses in the doing. Britain in 1964 was not struggling with the concept and legacies of Colonialism in the same way France was over Algeria, so the film feels more like an old-fashioned Boy’s Own Adventure, common at the time of the height of the British Empire, the era in which Zulu is set. Britain eulogised its war dead and the great sacrifices that were made (mostly by the working classes) in maintaining an empire on which the sun never set. Any visit to the great Abbey’s or churches of London will reveal the nexus between religion, royalty and the glorious dead. How else to continue a steady stream of soldiers than to convince them they will earn endless praise and immortality? Their Name Liveth Forevermore indeed.

Endfield handles the necessary spectacle with a sure eye and also holds the attention in the more intimate exchanges between the officers and the men. A key to its success is in finding the humanity of the officers and of the foot soldiers who must follow orders when their emotions must be telling them to do otherwise. Michael Caine convinced Endfield to expand the role of Bromhill, originally written as an upper-class twit, to make him more dimensional and to grow under pressure as the film progresses. Both Baker and Caine succeed in delivering performances that are rounded and fully fleshed out; splendid characterisations of men under extreme stress. It’s also an example of the brutal efficiency of the British military machine, and even though the Zulu’s had purloined the rifles of the defeated force at Isandlwana they were outwitted by superior tactics.

The film portrays ordinary British men coping with an extraordinary situation, and surviving by dint of their military training, which was possible given the ordnance involved in 1879. The Empire moved on to even greater levels of slaughter on the Western Front some 35 years later, where training and tactics melted in the face of industrial scale killing machines.

Best to enjoy Zulu at the level of an historical curiosity and, much like the classic WWII Brit films that preceded it, as part propaganda as much as re-enactment. That a generation of British soldiers had to face these kind of situations is startling enough, but to do it on the edges of the known so-called civilised universe is astonishing. Endfield presents the natives are neither noble savages or mindless beasts, they are just there, inhabitants of their own land repelling invaders and does not dwell on the politics. Zulu is classic, old-school filmmaking and can be enjoyed as grand spectacle pure and simple, a story told with verve and dash and full of fine performances, especially Caine’s star making turn. Jolly good show old bean! 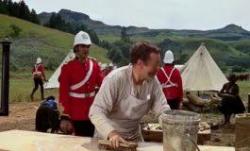