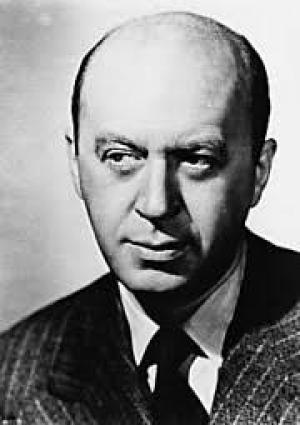 He did it his way.

'I never seek controversy or foresee it for my pictures. I take a personal stand, and perhaps because my films are on contemporary subjects, people do not share my point of view.' ~ Otto Preminger

Otto Preminger was an ambitious, educated European who rose to prominence in Hollywood at the end of WWII after a circuitous route, involving theatre in Vienna under Max Reinhardt and a falling out with Fox supremo Daryl F. Zanuck. Fox offered Preminger a contract during a talent scouting spree in Europe in the mid 1930’s and after a couple of mild efforts Zanuck offered him a prestige adventure film project in 1938, Kidnapped, which Zanuck himself had adapted from the famous Stevenson novel. It may have been a given that the two huge egos would clash, but Zanuck duly fired Preminger who then went off to lick his wounds on Broadway. This coincided with WWII, and with Zanuck away at the war, his Fox partner Willian Goetz bought a hit play that Preminger directed and gave the surly director a chance to both direct and star in the property after Preminger proposed he direct it for free instead of working with Ernst Lubitsch. Preminger, although he’d delivered a hit, was no fan of the play, and duly roped in a young Sam Fuller to beef it up as a screenplay.

Zanuck returned from the war to find the whole project a done deal and Preminger re-established at Fox and working on a new project, a founding pillar of Film Noir, the immortal Laura. Goetz had approved Preminger as director on the piece, but Zanuck demoted him to producer and replaced him with Rouben Mamoulian who set about changing Preminger’s vision fundamentally. Preminger eventually persuaded Zanuck that his approach was better, and Zanuck relented, only to see Laura become a break-out hit, make a star out of Gene Tierney and set Preminger up as an A-list talent. Next up, Preminger collaborated with Lubitsch before he took over direction of the film when Lubitsch died, a minor one called A Royal Scandal with Tallulah Bankhead, then he delved back into the dark currents of Film Noir with the excellent Fallen Angel, with Laura alumnus Dana Andrews.

Preminger hit his stride at Fox, won the grudging respect of Zanuck and turned out several hits and few misses under his well-paid 7-year-contract. Prime amongst the quality films were Where The Sidewalk Ends and Whirlpool reuniting Laura co-stars Tierney and Andrews. Both films benefited from razor sharp Ben Hecht scripts, an indication of the primacy Preminger placed in writers. These Film Noirs were a specialty for displaced European talents like Jacques Tourneur, Robert Siodmak and Billy Wilder, who was essentially (like Preminger) an erudite Viennese Jew. Other films during this period included the controversial best seller Forever Amber, The Fan, an adaptation of an Oscar Wilde play and Daisy Kenyon, a pot boiler with an A-List cast including Joan Crawford, Dana Andrews and Henry Fonda, still paying off his debt for getting Grapes of Wrath from Zanuck.

Preminger made another couple of Noir’s next, the odd remake of the French classic Le Corbeau, called The 13th Letter with Linda Darnell, and a typically fine entry with Robert Mitchum and Jean Simmons, called Angel Face, for which Zanuck loaned him out to Howard Hughes at RKO. The director turned independent producer for his next project, a controversial adaptation of the play, The Moon is Blue, with William Holden.  He finished at Fox with two excellent hits, Carmen Jones, with Harry Belafonte and Dorothy Dandridge (with whom he had a long-time personal relationship) and The River of No Return with Fox’s biggest star, Marilyn Monroe and Robert Mitchum. Zanuck and Preminger parted company now that the director was a big enough name to produce his own features, which he did for the rest of his career almost without exception.

'Directing Marilyn Monroe was like directing Lassie. You needed fourteen takes to get each one of them right.' ~ Otto Preminger

Post Fox, the thing that set Preminger apart from his peers in the conservative 1950s was his appetite for pushing boundaries, particularly in the relatively puritan atmosphere of mainstream US cinema compared with the more liberal mores of contemporary European cinema. He produced a mainstream war film with Gary Cooper, before he confronted heroin addiction in the excellent drama The Man With The Golden Arm starring Frank Sinatra in a career best performance. He produced Saint Joan with his new acting discovery Jean Seberg, a fine ensemble cast of Brit stalwarts and had the George Bernard Shaw source play adapted by Graeme Greene. He used Seberg again for Bonjour Tristesse, co-starring David Niven and Deborah Kerr and confronted controversy again in 1959 with Anatomy of A Murder, a withering look at a rape trial starring American everyman Jimmy Stewart. Preminger became a familiar target to groups like The Legion of Decency, the Catholic organisation that monitored the moral content in cinema.

One job of work he took at the end of the decade was for Sam Goldwyn, who had bought the film rights to the Gershwin musical Porgy and Bess. The production was troubled from the beginning after several directors were passed over, but Rouben Mamoulian took it on and immediately clashed with Goldwyn. Given one of the stars was Dorothy Dandridge, Preminger’s girlfriend, Preminger agreed to help out and repeated the Laura scenario with Mamoulian nearly 15 years later. He then produced a big budget epic in Exodus, a drama about the setting up of Israel starring Paul Newman, which helped bring the influence of the Hollywood Blacklist to an end by crediting blacklisted writer Dalton Trumbo. Preminger stirred the pot again with Advise and Consent, with Henry Fonda and Charles Laughton et. al. in a Washington set drama that had a homosexual scandal at the heart of the story. He again chipped away at the blacklist by employing actors Will Geer and Burgess Meredith, two HUAC victims.

Otto Preminger spent the last decade of his career providing work of varying degrees of quality, starting with the underwhelming but ambitious The Cardinal, another examination of establishment institutions in this case the Church. He turned to the military next with a tough, unflinching look at WWII with In Harm’s Way, starring John Wayne, Kirk Douglas and Henry Fonda, before his oddball thriller Bunny Lake is Missing, in 1965. The film, starring Laurence Olivier, was a flop at the time but has since gained solid critical support. The same could be said of his follow up, the inter-racial southern drama Hurry Sundown, starring Jane Fonda and a miscast Michael Caine. Preminger finished the 1960’s with the truly bizarre LSD themed Skidoo, proving that Old Hollywood truly knew nothing about the counterculture.

'I do not welcome advice from actors; they are here to act.' ~ Otto Preminger

In 1970 Preminger produced Tell Me That You Love Me Junie Moon with Liza Minelli, which was met with critical and commercial indifference as the director lost touch with the times. Such Good Friends was an Elaine May script that failed to ignite and in 1975 he fared a little better with the thriller Rosebud, starring Peter O’Toole (after Robert Mitchum walked) with a smaller role from Isabelle Huppert no less. Preminger’s final film, The Human Factor, featured a superb cast, Richard Attenborough, Nicol Williamson, John Gielgud and Derek Jacobi in a Graeme Greene story adapted by Tom Stoppard, but failed at the box office.

Otto Preminger carved a Hollywood career against the odds, working fractiously with Daryl F. Zanuck, his polar opposite in background and philosophy if not temperament, to be the premier director on the Fox lot over many years, before he distinguished himself as a formidable producer-director. Preminger was a tyrant, a walking cliché of the dictatorial director, but he knew the value of great staging, fine writers and detailed effort. He was not afraid to tackle thought provoking, controversial themes, and although his approach may not have endeared him to many, his best films remain quintessential examples of the Dream Factory in high gear.