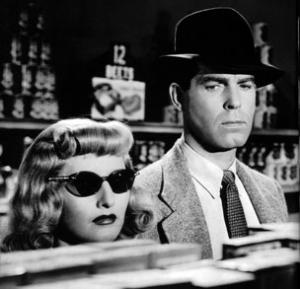 Double Indemnity  marks a turning point in the boldness of vision Billy Wilder was prepared to present to his audience. A successful stint as a screen writer in the late '30s saw him take advantage of the furrow ploughed by Preston Sturges and John Huston, the rise of the writer-director, a hybrid beast whose attractriveness was at least in part confirmed by the recent genius of Orson Welles. Wilder gives us an acid drenched exploration of lust and greed, imbuing the James M. Cain source material with a European sensibility for nuance.It’s one of the iconic noirs, tightly scripted and luminously shot. Wilder, aided by co-screewriter Raymond Chandler no less, composes Cain’s seemingly amoral characters into a late WW2 canvas, where the old rules of formality are barely holding together. After the horrors in Europe, where civilisation is literally being blown to bits, here is a world where it’s dog eat dog, a Los Angeles that has dark, not sunny edges, so you better look sharp.

Wilder had difficulty casting the film, as there were not too many redeeming aspects to the leads as written, and he effectively talked the two stars into playing against type. It’s a part of the films strength that he did. Barbara Stanwyck was not a natural femme fatale, but a blonde wig with an attitude works wonders and at first sight she’s enough to tempt MacMurray to abandon any semblance of propriety and jump on board the train to nowhere. A tough and ‘game’ broad from Brooklyn, Stanwyck started work at 13 after being orphaned young and after some Broadway success worked her way to Hollywood, versatile and talented she played a number of different types very well. Wilder had scripted her character in Hawks’ Ball Of Fire  in 1941 and in her he saw the perfect Phyllis. Fred MacMurray was also ideal in that his stolid wholesomeness, later immortalised in TV, is a necessary starting point for his ‘fall’, the fall of all good men when trapped by the black widow that is Phyllis.

Wilder starts the film at the end, with MacMurray’s Walter Neff working out how he got there, and then filling us and the Robinson character (Keyes) in on the way. Edward G is really the 3rd part of the love triangle, not Stanwyck’s oafish husband. Keyes has real respect and regard for Walter, bordering on love, making his blindness to the ultimate betrayal even more keenly felt. Walter has idly daydreamed about the what ‘inside’ information could bring him, and the allure of Stanwycks’ Phyllis forces him to bump into the reality of stepping across the legal divide, an invisible line that separates real strength and character from weak and flawed souls. Keyes is sure of the dark heart of most men, weak men, and obviously doesn’t count Walter amongst their number. Keyes is a numbers man, he knows the odds inside out, in fact he wrote the book. Walter is smart enough to think he can beat the system if he puts his mind to it, even if Keyes, who he admires, is part of the system. Wilder’s contribution is to bring a European attitude of knowing awareness of the inherit corruption that lurks just below the surface in all of humankind, it’s how we face it that counts. Self-awareness is a commodity in short supply in Wilder’s America.

Double Indemnity  is a film about blind spots, shot in the shadowland of Film Noir.  Walter has a blind spot with Phyllis, and it makes him uncertain enough to second guess his choices. Keyes has a blind spot with Walter, and overlooks him as a potential suspect. As the scheme unravels, Walters blind spot lifts and he doesn’t like what he sees, but he’s on that train, all the way to the end of the line. Wilder shows us a man who thought he could beat the odds, an Adam to Stanwyck’s Eve. Walter gets what he has coming, and takes it like a man at last. Gut shot Neff attempts to leave after the recorded confession reveals all to Keyes, who bleakly remarks, "you won’t make the border, you won’t even make the elevator."

John Seitz, a Hollywood silent era veteran and favourite of Preston Sturges, shot the film, opening up the possibilities of what a noir oriented film could achieve in the sunny climes of honeysuckle scented California. The public lapped it up, ready for the stylish dish Billy had prepared, forgiving the bitter edges and unpalatable truths on display, beguiled by the deftness of the entertainment on show, and after all, crime didn’t pay for the two lovers in the end. But maybe that wasn’t the point? They would certainly not be so forgiving the next time Wilder dipped his pen in the hard-boiled genre and held up the mirror a few years later in the uber-acerbic Ace In The Hole.  Wilder, in league with Walter and Phyllis, had the verve and balls to take us all the way, "to the end of the line baby",  a stomach churning ride, but exhilarating as well, and where he would sugar coat some of his later works, no such consideration is given here to this dirty romance.

Double Indemnity  ranks as one of the defining achievements of Film Noir,  a genre derived equally from the dark toned American gangster films of the '30s and the experience of the European exiles who fled Hitler and landed on Hollywood's golden shores. Wilder, Fritz Lang, Jacques Tourneur et al, all favoured dark themed productions, seemingly attempting to come to terms with the darkness they'd experienced under the fascist bootheel, and in doing so gave birth to a genre that spoke to a disillusioned post-WWII world. Double Indemnity  exists as the quintessential noir, a perfect encapsulation of a moment in time, intrinsic to its era and utterly timeless and outside of it at the same time. How did you do it Billy?

* The last frame is a curio, it's of Walter being marched to the electric chair - it was filmed but not used as Wilder preferred to use the ending in the office. 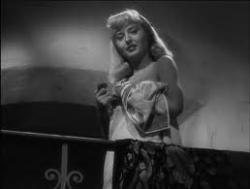 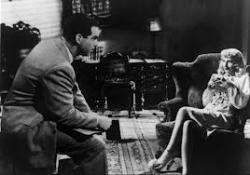 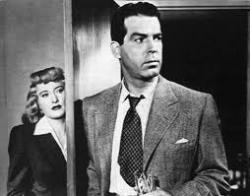 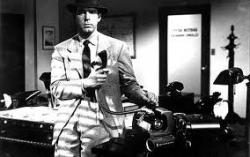 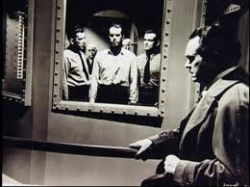